Mitya Aleshkovsky: ''Paternalism is the bane of our society''

Mitya Aleshkovsky – journalist, social activist, chairman of Need Help charity fund – visited Smena centre. The goal of the visit was the discussion 'Can We Change the World?' in which all people could participate. Realnoe Vremya tells the details.

Today Mitya Aleshkovsky is one of the most popular people in the country. This popularity is provided not by promotion in the mass media but real deeds.

Aleshkovsky is the chairman of the council of Need Help fund, it's quite a specific fund. Its mission is systematic development of charity in Russia. And we have a problem with charity. At the meeting in Smena, Aleshkovsky put an example – there are more charity funds in the American state of Iowa whose size is approximately equal to Samara Oblast than in all Russia. Need Help fund helps more than eighty Russian funds raise donations, which is more than 70,000 employees. Need Help's another project is called Such Cases. Its task is to draw the attention of society to the social topic. Journalists gather stories of people who need help across the country and make them available for society. The Department for Special Projects of Such Cases is full-fledged video production. The main task of people who work here is to change the consciousness of the country's citizens, urge them to action. 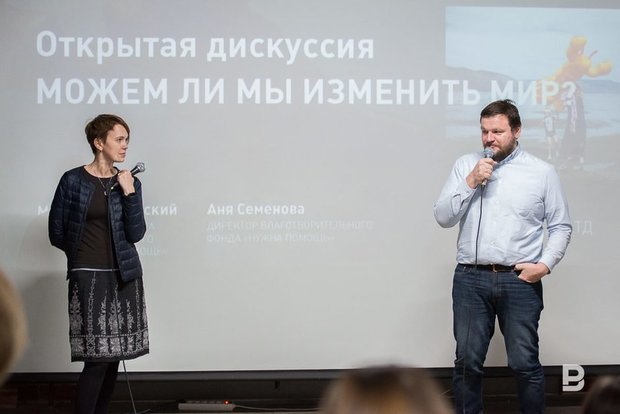 Anna Semyonova and Mitya Aleshkovsky brought Dan Pallotta's Uncharitable book, Need Help printed it. A book is a kind of tool to increase the social commitment of people that reveals mechanisms of support and mutual help.

Nobody will free us

Smena's discussion hall was full, young people were the majority of those who came to meet with Alekshkovsky and Semyonova. Mitya started his talk with the audience with the question: ''What social problems do you have in Kazan?'' Voices in the hall started to enumerate: ''Homeless animals and people, orphans, helpless old people, needy families, domestic violence, absence of accessible environment for disabled people, problems with medical service, education, urban engineering.'' ''That's to say, like everywhere,'' Mitya Aleshkovsky concluded.

Can we really influence public structures, so that they will really start to solve these problems actively? In this case, Aleshkovsky is pessimistic. And he probably looks at it from a more realistic perspective. Business? Business' goal is not charity but making money. Although business sometimes can help. 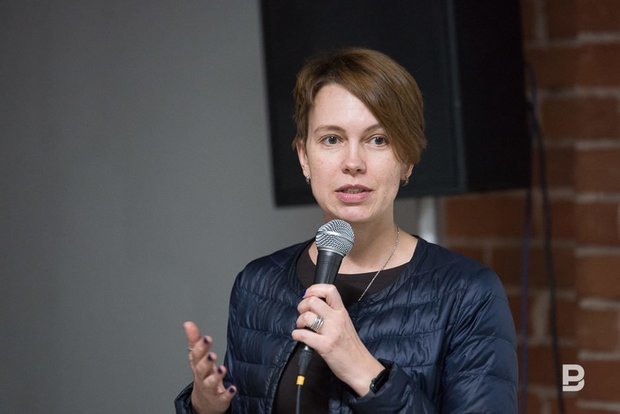 ''Charity funds need to be in every city, in every district. Now 50% of all charity funds are concentrated in Moscow, 20% — in Saint Petersburg, the others are spread across the country,'' Anna Semyonova says

Where is the exit? Aleshkovsky quite fairly thinks there is an exit. It's charity, it's citizens' active position. Right charity can have a real impact on a real solution to the problem. ''Paternalism is the bane of our society, that we always wait for somebody to come and solve our problem – the country, a magician in a sky-blue helicopter and so on,'' Mitya Aleshkovsky supposes. The task is how to get rid of this reasoning. Aleshkovsky personally made sure that people of completely opposite views and opinions gathered around a good deed.

''Development of charity in Russia is one of the main tasks. Charity funds need to be in every city, in every district. Now 50% of all charity funds are concentrated in Moscow, 20% — in Saint Petersburg, the others are spread across the country,'' Anna Semyonova gave an example. Russia ranks 124th in the world in level of charity.

In Aleshkovsky's opinion, it's possible to change the world, each of us needs to simply ask himself a question: ''What have I personally done for it and what can I do?'' We need to cope with paternalism and apathy. He put two examples that recall just miracles. In Aleshkovsky's opinion, it's possible to change the world, each of us needs to simply ask himself a question: ''What have I personally done for it and what can I do?''

The first example is how residents drastically changed their life in a settlement in Far East that is 500 km far from Vladivostok, on the seashore. They improved the settlement, repaired houses, arranged streets, started to issue a newspaper, then founded a film festival, opened three museums. And they did it all using their own money, the money of 3,000 residents.

The second example is sadly known Teriberka, a settlement on the Barents seashore where Leviathan was shot. Enthusiasts from Moscow came there and managed to stir up the locals. The settlement stopped being depressive and perked up. To start with, they created the settlement's development plan where 500 people lived. They founded a film festival – there were more incoming people than the very residents. Investors appeared later, new working places were created. Accommodation is becoming expensive in Teriberka and cheaper in neighbouring settlements now. Tourists started to come to Teriberka where eco-paths opened.

We can't say the discussion 'Can We Change the World?' was very active, the hall listened to Aleshkovsky and Semyonov more. I suppose it's not awful because seeds were planted in a prepared soil. Among a number of his projects, Mitya Aleshkovsky has one – 30 rubles a month for charity. One ruble a day that can help someone survive. Only one ruble a day.