Masashi Kanei: ''In Russia they think: brick or concrete house is better than wooden — it is a mistake''

Iida Sangyo Co., Ltd. erects two test cottages made from glued laminated timber in Kazan but aim at construction of 10,000 such buildings a year

Japanese developers have entered the real estate market in Tatarstan promising to invest $100 million in Russian business. $30 million has already been allocated, including for the launch of a plant to produce glued laminated timber in the Far East of Russia. The similar production is planned in Tatarstan. In the meantime, the investor decided to demonstrate to the citizens two wood-frame houses in the settlement of Novye Salmachi built by Japanese technology and in turnkey condition: with furniture and repairs. One cottage is demo, the other, with an area of 120 square meters, is for sale for 40,000 rubles per sq. m. The opening of the house was attended by the president of Iida Sangyo, the company that conquered a third of the market of low-rise construction in Japan. In an interview with Realnoe Vremya, Masashi Kanei told more about their business model in Tatarstan.

Mr Kanei, what are your plans on business development in Russia and in our republic?

In Japan, our company builds and sells 45,000 houses a year — this indicates that the Japanese people have chosen them. It is important for us that in Russia people also accepted our products. Large construction volumes allow us to reduce the cost of housing while maintaining its quality. We aim to enter a large-scale production in your country as well to reduce the cost of the product.

In Japan, we occupy about 30% of the market for construction of individual houses. In your region, in the first two years we plan to build from 5 to 10 houses a month, or 100 houses a year. In the third year, we plan to commission 1,000 cottages, and then, while I am alive I will seek to the volumes of 10,000 houses a year in Tatarstan.

In Russia you have entered through two regions: the Far East and Tatarstan. Why did you choose our republic?

Two and a half years ago, I visited your region as part of the Japanese government delegation and was a representative of one of 30 companies invited to participate. Tatarstan authorities then gave us a very warm welcome, which was the first stimulus for the decision — to come to your republic. Last year we also discussed with your government to build affordable Japanese houses. In Japan, we occupy about 30% of the market for construction of individual houses. In your region, in the first two years we plan to build from 5 to 10 houses a month, or 100 houses a year

Second, another reason is your geographical location: Kazan in located in Central Russia, where half of the population live – it is potentially a large market. Besides, I'm sure that your people will give preference to individual houses soon.

Alabuga is one of the candidates for the plant

What local companies are you going to cooperate with? Your associates from Iida Group Holdings have recently met with representatives of ASG, have you reached any agreement?

Yes, there have been negotiations, but no certain agreements have been reached yet, we did not conclude any deals. We plan to actively develop cooperation after the presentation of our houses.

Have you already chosen a site for the production of houses? If I am not mistaken, one of the options was the SEZ Alabuga?

To build cheaper, of course, it is necessary to choose sites such as Alabuga. Today for us this is truly one of the candidates for commencement of production. But for the construction of 100 houses a year it is yet too early to launch a plant, it's premature.

Japanese carpenters will teach Tatarstan ones

As far as I know, for the construction of these two houses it was invited Japanese carpenters. Who will build your first 100 houses in Tatarstan next year?

This is a very important question. The house where we are being now was built not only by Japanese masters, but also by Tatarstan builders who worked under their leadership. Our specialists controlled the work at all stages of construction. So, this is a joint work. Besides, we have invited your specialists for training in Japan to better study all phases of construction work of these houses. We now have not only specialists from Tatarstan and Russia but also from other states who are being trained in our company. We want them to fully master the technique of Japanese house-building, and after returning home, to build housing by our technologies. Iida Group has already accepted about 600 trainees from different countries. The house where we are being now was built not only by Japanese masters, but also by Tatarstan builders who worked under their leadership. Our specialists controlled the work at all stages of construction

One of the features of the houses of Iida Sangyo Rus (a subsidiary company of Iida Group) is the Japanese wooden technology. We use glued laminated timber with the 'dovetail' technology, which requires great skill of carpenters. But we want to mechanize this work. We have plans to produce with the use of high technologies not only timber, but also metal fasteners, panels that are also used in house assembling. Since all our materials are of very high quality, even with a small experience of the builders the house is made of high quality.

It is only the glued laminated timber that was brought from Japan. All other structures are made from local materials. But for construction of next houses, we will produce timber also here, we have already agreed with one of Tatarstan enterprises. But even this imported timber was only processed in Japan, but the tree itself, I think, is from Russia. Our concept is to continue to build from local raw materials.

''When I see how Russia builds frame houses, it seems to me to be unprofessional work''

In Russia, we have an ambiguous attitude to wooden frame houses. Do you think you will be able to change the opinion of our citizens that frame house can also be of high quality and durable?

I believe yes. However, when I see how Russia builds conventional frame houses: timber is placed anyhow, I think this is unprofessional work, for example, when a consumer builds a house himself. Although lately I have begun to see that in St. Petersburg they began to build frame houses of higher quality, but it is an influence of Finnish technologies. 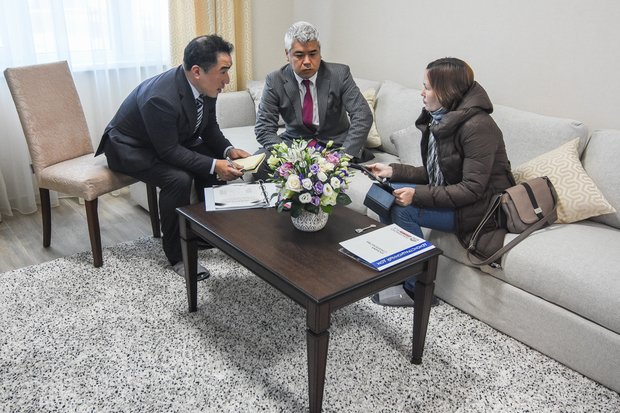 In Japan, of course, the most durable house is considered to be made of concrete. But if you calculate the expenses and the ultimate cost of such housing, it becomes clear that the best choice is a wooden house

Earlier in Japan we also gave preference to brick houses, but that was long ago. Now people vote for costs reduction and high quality, therefore they choose frame houses. If Russia thinks that a brick or concrete house is better and stronger than wooden, it is a mistake. Look, we have many natural disasters: earthquakes, typhoons. But people still choose our frame houses, they are the most popular in Japan. If they were short-lived, they wouldn't buy them.

I often travel to Australia, they also used to build brick houses mostly, thinking that they were the most reliable and durable. But now they changed opinion and build the same wooden frame houses, as we do, but only as decor they use brick. In Japan, of course, the most durable house is considered to be made of concrete. But if you calculate the expenses and the ultimate cost of such housing, it becomes clear that the best choice is a wooden house.

Our holding Iida Group have built test houses not only in Kazan, but also in Vladivostok. However, they were built according to a little different technology — panel houses. And now we want to see which of these houses the Russians will like more: wooden frame houses, like here in Tatarstan, or panel houses, like in the Far East.