Discussions about the transition of Saint Isaac's Cathedral to the Russian Orthodox Church are not ceasing in Saint Petersburg. However, Russian Muslims have a good example of how a cult building belonging to religious people is well used by a local museum, and nobody bothers anybody. It is Khan's Mosque in the city of Kasimov in Ryazan Oblast. In a column written for Realnoe Vremya, head of the Information and Analytics Department of the Russian Muslim Spirituality Directorate Dilyara Akhmetova tells what conditions religious people got this cathedral on, what tasks Kasimov Tatars set and says about the state of other landmarks of the city.

Khan's land. Meanwhile some landmarks of ancient Kasimov are reappearing, others are waiting for the country and society's attention.

Kasimov is the former capital of Khanate of Kasimov – a medieval state – has historical landmarks that any tourism capital would envy. It is Khan's Mosque whose towers are dated back to the 14, 15 or 16 th centuries by scientists (but historians did not come to a single opinion), shrines of Khan Shakh Ali and Shaybanid prince from Khwarezm Afgan Mukhammed of the 15th and 17th centuries respectively. The oldest survived tombs in Kasimov's Old Posad Cemetery refer to the early Middle Ages. The ashes of descents of Genghis Khan rest there. Very Khan Kasim – the founder of the khanate and son of Kazan Khan Ulug Mukhammed – is likely to have been buried here.

Khan's Mosque is the most famous Tatar landmark of Kasimov, of course. During 75 years, from 1938 to 2014, it belonged to the Kasimov regional museum, which is Kasimov Historical and Cultural Museum-Reserve today. On the eve of 2014, the building of the mosque and two mausoleums were given to religious people on an official ceremony. According to the act they signed, the buildings started to belong to the Muslim Spiritual Directorate of the European part of Russia, which is Muslim Spiritual Directorate of Russia today. The document was signed by head of the regional administration of the Federal Agency for State Property Management in Ryazan Oblast Nikolai Taskin and first deputy chairman of the Muslim Spiritual Directorate of the European part of Russia Damir Gizzatullin in presence of Imam Mukhtasib of Ryazan Oblast Rashid Bultacheyev, who performed the first services at Khan's Mosque after the 75 years. The Federal Law on Restitution of Religious Property in State or Municipal Ownership to Religious Organisations (as from 30 November 2010) became the foundation of the transition – the same law based on which Saint Isaac's Cathedral in Saint Petersburg is to pass to religious people and the Church. The northern capital's administration will have to solve an uneasy problem on conservation of that great deal of the museum and scientific work done in the museum for decades.

The Muslim community also faced this uneasy choice – to use Allah's house for its designated purpose to the detriment of the museum's interests and its scientific work. Fortunately, the Muslim Spiritual Directorate, Tatar National and Cultural Autonomy and Kasimov Historical and Cultural Museum-Reserve managed to find a solution.

''We considered the attitude to the Kasimov museum-reserve as a kind of usurper of Muslims' property unconstructive and wrong. On the contrary, Russian Muslims, Kasimov Tatars thank the museum and its directorate because this establishment became almost the main scientific establishment that studied the history, culture and ethnography of Kasimov Tatars in the Soviet era. Our religious leader Mufti Sheikh Ravil Gainutdin expressed the museum workers his respect and gratitude and awarded the museum a special certificate of gratitude in the name of its director Elena Balakina for its contribution to the study of the culture of Kasimov Tatars,'' says head of the Russian Muslim Spirituality Directorate's apparatus Ildar Nurimanov. Exhibitions of the museum about the history of the Kasimov area were located there when the building of the mosque was given to the museum in the 1930s. After the transition of the second building – the Alyanchikovs' house – in 1998, the main exposition moved there. An exposition called Kasimov Tatars' Ethnography, which was popular among tourists and citizens, opened in the building of the mosque from 2002 to 2014. Moreover, thick walls of the cathedral became a storage for the rich collection of the museum, which includes ordinary people and aristocracy's everyday items, unique samples of Kasimov Tatars' clothes, everyday items, coins, a legacy of handwritten books. Figuratively speaking, the mosque's building served a treasure box of Kasimov Tatars for decades.

''We can point out about 10-14 collections about Tatar Muslims at our museum. They are collections of women and men's national costumes, shoes, tubeteys, kalfaks, towels, embroideries, pattern weavings, jewellery, there are several memorial collections,'' the museum-reserve's director Elena Balakina enumerates.

According to the law, the state must have given the museum other rooms to store collections. Local Muslims who manage and use the building on the agreement of the spiritual directorate found a wise solution in this situation. There was a signed a lease agreement, according to which the collection is still kept at the mosque. Moreover, the museum is responsible for payment of public utility bills. This agreement is also a solution of the problem for the local Muslim community that doesn't have much money.

The Tatar National and Cultural Autonomy of Kasimov is seriously going to conserve all unique architectural landmarks for next generations and make them a hearth of the Tatar Muslim cultural, religious and spiritual renascence. Not only Khan's Mosque, two mausoleums and cemetery are among the most important landmarks. There is a building of Kastrovsky Madrasa built in 1808 and New Mosque erected in 1906 (photo)

For conservation of architectural landmarks

''The lease agreement with the museum expires in April 2017. We want to prolong it as expansion of our cooperation format. Using the main prayer hall for its direct purpose, we would like to give one of the unoccupied halls for a permanent exhibition on the history and culture of Kasimov Tatars,'' the autonomy's chairman Ildar Bikuev tells.

He says that the cooperation will develop in the future. For instance, the museum's contents that refer to the history of Kasimov Tatars need to be scientifically inventoried and catalogued. This colossal scientific labour will be done under the aegis of the Russian Muslim Spirituality Directorate. A publication of a catalogue in colour is to be its result. Moreover, the spirituality directorate would like to see the items of Kasimov Museum-Reserve's collection in the exhibition of Moscow Cathedral Moscow's museum. As it is known, the principal Russian mosque was erected on the money of merchants and beneficiaries that came from Kasimov.

Conservation and development of the spiritual, cultural legacy of Kasimov Tatars who compactly lived in 18 villages of Kasimov District except the very city of Kasimov before the revolution conserved their religion, language and culture – what the Tatar autonomy exists in Kasimov for. Not only Khan's Mosque, two mausoleums and cemetery are among the most important landmarks. There is a building of Kastrovsky Madrasa built in 1808 and New Mosque erected in 1906 (in addition, it reminds that the Tatar Muslim life went swimmingly and blossomed down the Soviet era even if the Khanate of Kasimov disappeared by the end of the 17 th century). In 2015, Kastrovsky Madrasa and New Mosque were given to the local community back. The latter restored the building of the madrasa on its own and keeps New Mosque in a good state. By the way, it is the cathedral mosque in Kasimov today, there are several mosques in the nearest Tatar villages. Today the autonomy's chairman Ildar Bikuev's attention is focused on Khan's Mosque and tombs that need an urgent restoration. It is also the main reason why they don't manage to renew the religious activity at the mosque. A package of documents for restoration of the architectural landmarks has been given to the regional Ministry of Culture these days. Then an application will be sent to the federal Ministry of Culture.

In October 2015, the Russian Muslim Spirituality Directorate representatives participated in the meeting of a commission of experts who make a plan for urgent measures to preserve religious cultural heritage sites that are in disrepair together with representatives of central religious organisations and experts in preservation of cultural heritage sites. Then Mufti Gainutdin's first deputy Damir Mukhetdinov claimed about the bad state of two mosques that were architectural landmarks of federal importance – Kasimov Khan's Mosque and Vladikavkaz Sunni Mosque. The government of the Russian Federation and Ministry of Culture took the address seriously. Nowadays the restoration of Vladikavkaz Sunni Mosque is under way. Now Kasimov expects the same responsible attitude of functionaries.

A group of archaeologists from Kazan headed by director of the Kazan Federal University's Archaeological Museum Farid Akhmetgalin did archaeological research in summer 2016. The digs were organised within the Republic of Tatarstan's state programme Tatars' National Identity Conservation from 2014 to 2016. The archaeologists also came to a conclusion that the landmarks needed to be restored and constantly supervised by archaeologists and architects. Particularly the summer archaeological research showed that the tower was built without a foundation, and the stones were laid on a levelled surface. As Akhmetgalin told, Sultan Afgan Mukhammed's mausoleum and Old Posad Muslim Tatar Cemetery caused great concern. ''The very mausoleum lost its facings – initially, it was covered with yellow and green tiles, but it happened as early as 19 th century. Nowadays it suffers much from modern barbarians and a lack of care. Unclear people enter it, leave rubbish and perform unclear rituals. The iron door doesn't help. It is broken in a more barbarian way every time. The roof of the mausoleum started to leak, which can lead to the building's destruction. The cemetery is in a worse state. There are no visible gravestones, borders are not marked, there is not lettering showing that this cemetery and mausoleum are among the architectural landmarks and protected by the state,'' the scientist complains.

Akhmetgalin stresses Old Posad Cemetery is the oldest cemetery among all Muslim landmarks of Kasimov. The cemetery is a place where descendants of Genghis Khan were buried. Very Khan Kasim, other khans and princes who ruled the Khanate of Kasimov were probably buried here, he thinks. As the Kazan archaeologist emphasises, it is necessary to find the borders of the Old Posad Muslim Cemetery, hedge its territory, show that the necropolis has a status of regional landmark and make Sultan Afgan Mukhammed's tomb a federal landmark.

Farid Akhmetgalin agrees that the belonging to the museum positively affected the integrity of Khan's Mosque. However, it doesn't cancel the necessity to hold restoration works.

''Use of the mosque as a building for religious purposes doesn't contradict the use of it as a museum or architectural landmark. Kul Sharif, Rashid's Mosque in Nizhny Novgorod Oblast are illustrative examples. Although the museum funds are to move to a new, more adapted building as time goes by, we can't break contact with the museum. The museum must have a small, rather a changing exhibition that would show some moments of the history of Kasimov Tatars and Tatars of Ryazan Oblast and about the Muslim community,'' the scientist resumes. 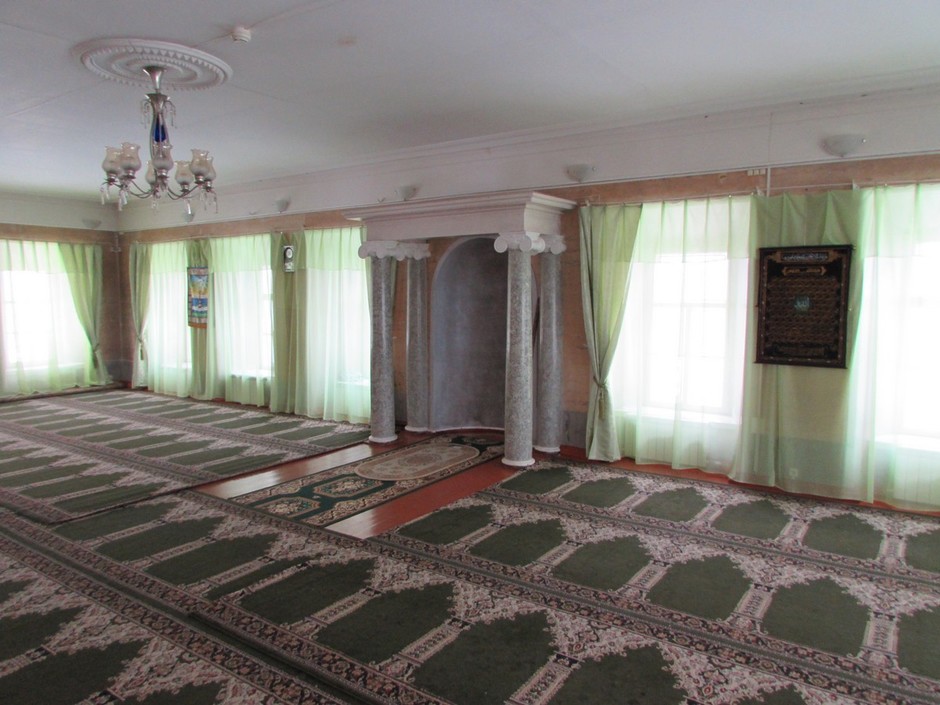