A World League match between Russia and Georgia took place on 14 February in Kazan. The game ended with the Russian players' confident victory 19-8. Realnoe Vremya tells about a press conference before the match, water polo problems in Russia and Georgia and the game.

''Kazan raised the bar in terms of organisation of aquatic competitions, so that you are unique''

A press conference, which is traditional for this kind of events, took place on the eve of the match. Apart from the team head coaches, the Russian Water Polo Federation President Aleksey Vlasenko, FINA delegate Evgeny Sharonov, Minister of Sport and Youth Affairs of Tatarstan Vladimir Leonov and Tatarstan Water Polo Federation President Ilkham Nasibullin were there.

At the beginning of the meeting, Leonov told how it was decided to hold this match in Kazan: ''We start the year with a beautiful event. We have not held such a serious event in this palace (Editor's Note: Aquatics Palace) for the first time. Many events had been held here: synchronised swimming, diving, swimming. But water polo did not reach this palace. So we talked to the Russian Water Polo Federation and decided to return water polo to the big palace.''

Vlasenko expressed general disappointment that the World League Superfinal won't be held in Kazan due to the Confederations Cup: ''Now we are thinking where to move it. There are many cities, many offers, everybody wants to do it. But Kazan raised the bar in terms of organisation of aquatic competitions, so that you are unique.''

It was not the end of the praise of Kazan. In general, there have been many events of this kind in recent time – one can get accustomed. And Leonov emphasised again the novelty and modernity of local sports venues: ''There is everything for it. I looked – a wonderful glade, gorgeous pic, guys trained yesterday. Feelings are probably different.'' 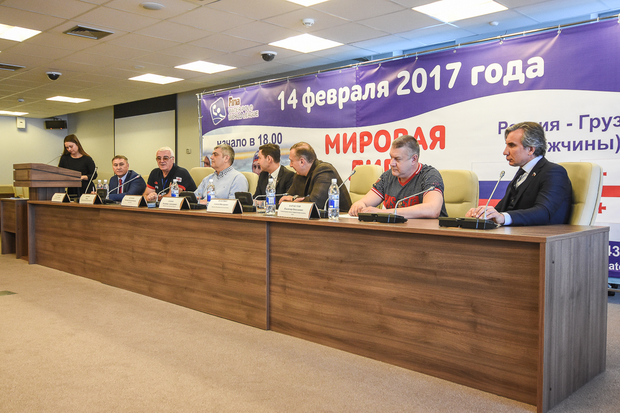 Vladimir Leonov: ''We hope the weather won't impede and fans will fill the stands. There will be a really beautiful game. It is pleasant that players of Kazan Sintez are in the Russian squad.

''I am sure there will be a big water polo event''

The previous game between Georgia and Russia, which took place in Tbilisi, ended with the Russians' victory 14-13. That match was even – Russia won only the first quarter (4-3), the other quarters ended in a draw (2-2, 5-5, 3-3). Georgian Mikhail Bagaturia levelled the score 54 seconds till the end of the match and gave fans of the Georgian squad hope for common success. However, Russian scored the decisive goal and won the victory 14 seconds until the end.

Vladimir Leonov also hoped for such a close fight: ''We hope the weather won't impede and fans will fill the stands. There will be a really beautiful game. It is pleasant that players of Kazan Sintez are in the Russian squad. I am sure there will be a big water polo event. Moreover, Tatarstan has deep traditions of this sport, the population loves it. Many guys do it. There is a professional club with a big history.''

Head coach of the Russian national team Vladimir Karabutov also hoped to see a good game and complained about losses in the team. Defensor from Sintez-Kazan Lev Magomaev was one of the losses.

''We will have an important match against with national team of Georgia. First of all, it is a match with our old friends with old traditions when our USSR national team achieved big results. Of course, we want to see a meeting of old friends and show a beautiful interesting game. 17 people were called up to the camp. Unfortunately, two of them were sick. They are Kirill Korneyev and Lev Magomaev. There was a task – to prepare for the match tactically. And we focused on the work with links. I would like to see the team's game today.'' Irek Zinnurov: ''Today both Russian and Georgian water polo are in a crisis. We should cope with it together – both clubs and the national team. Probably it would be a good decision to create a united league where we, Georgian clubs and teams from other countries could play''

''It would be a good decision to create a united league''

Problems in water polo in Russia and Georgia were mentioned on the press conference. Coach of the Georgian national team Vladimir Iselidze noted one of the major problems that is the absence of their own club championship: ''In Georgia, water polo is in a big crisis now. We even don't have a national championship. There are few clubs that can't stay strong. In 2009, water polo started to develop. The World League in Kazan is prestigious. This is why we will try to show our best game.''

Iselidze also offered to create a united league together with Russia: ''In general, our teams have had long friendship ties. It would be good, for instance, to give Georgian clubs the right to participate in the Russian Championship to increase the mastery and develop players.'' By the way, now two foreign clubs play in the Russian Championships – Astana from Kazakhstan and Youth Sports School from Minsk.

Famous Soviet and Russian water polo player Irek Zinnurov also supported this idea: ''Today both Russian and Georgian water polo are in a crisis. We should cope with it together – both clubs and the national team. Probably it would be a good decision to create a united league where we, Georgian clubs and teams from other countries could play. So players will gain experience and get used to competing in different conditions. I think the national Water Polo Federation will put effort, and we will help it. Together we will be able to help our national reach the world level.'' 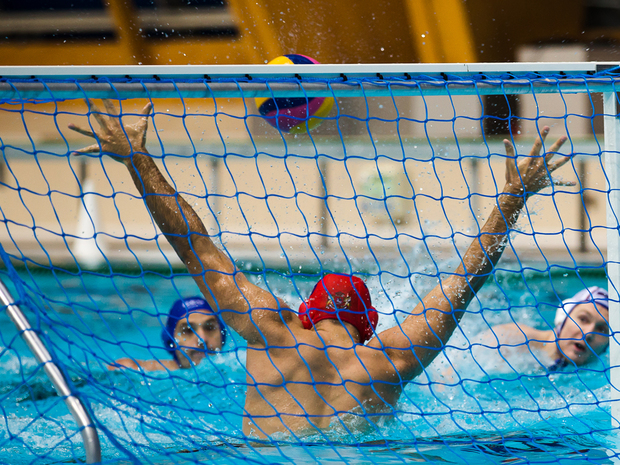 Apart from Lev Magomaev, goalkeeper Anton Antonov, defensor Artyom Odintsov and forwards Ivan Nagaev, Aleksey Ryzhov-Alenichev, Roman Shepelev and Igor Bychkov were called up to the national team of Russia from Sintez. The Kazan club is traditionally among the leaders of Russian water polo. This is why this number of Kazan players has nothing to do with the place of the competition.

The very game began even. Russians quite easily opened the score thanks to Nikolai Lazarev. But Georgian water polo players instantly levelled it. Of course, it affected the host team that reduced its pace a bit. But it took the lead again. Then Ryzhov-Alenichev increased the margin of his team. By the end of the quarter, the teams exchanged goals and went for a break 4-2.

Then the national team of Russia increased the attack on the guest team's goal having scored three balls in a row. Aleksey Bugaichuk, Ryzhov-Alenichev and Lazarev were noticeable. Georgians managed to give tit for tat, but another Kazan player Nagaev made the score 8-3. Then the teams exchanged two goals – Georgia replied to Mikhail Krasnov's ball by Damir Tsrepulia's goal, then Ryzhov-Alenichev performed a hat-trick, and Zurab Rurua made the score look like 10-5 by the break.

At the beginning of the third quarter, Rurua replied for one goal, so Georgia started to defend – Russia could not score a goal for 3 minutes but having done it, it was remarkable twice. The teams could not score more in the third quarter. The national team of Russia scored a great deal of balls in the final quarter. Everything started with Marko Elez's goal shot into the net of the Russian team. Then the host team started to attack – four goals were scored by Ryzhov-Alenichev. Other two Kazan players Nagaev and Shepelev also demonstrated their skills. Nikita Derevyankin also scored two balls, after which Georgians managed to score only one goal. It did not affect the big picture. 19-8 – Russian national team's confident victory.

Generally speaking, Sintez-Kazan also could win a victory in this match. Its players scored 7 balls. Ryzhov-Alenichev who scored four goals was one of the best players, of course.