‘Spoilt players-millionaires?’ Magomed Ozdoyev breaks stereotype! And not only he does…

Football in Russia is full of flashy stories about Russian football players, who show themselves not from the best side, to say nothing of Alexander Kokorin showing off and endless scandals of Igor Denisov. But our football has positive stories too, like when players and ex-players help to develop football in Russia. As part of the New Year's stories, sports editorial staff of Realnoe Vremya remembers the players who think about helping children. The reason was an opening of football school by Rubin player Magomed Ozdoyev.


On 22 December Magomed made a tweet that intrigued a lot all his followers and many journalists. Many people found in it an indication on his transfer from Rubin to another club. There are rumours that he signed a contract with Moscow Spartak and he will play till the end of the season in Kazan and in summer he will be among nine-time champions of Russia. But he revealed his secret very soon – Magomed Ozdoyev has opened his school in Ingushetia. Ozdoev tweeted: 'Work is in full swing! The opening is soon. Football school of Magomed Ozdoyev.)'

My son opened his own football school in the Republic of Ingushetia before New Year. It's me who is going to lead it, because one should be there every day. Before the opening my son and I conducted children football tournaments for five times in Ingushetia. Four teams took part in the tournaments. A team from Barsukivillage won, — said the father of 23-years old player Mustafa Ozdoyevin an interview to championat.com.

Due to the progress of young players and possible naturalization of Mario Fernandez, there is more and more criticism of Kombarovs brothers about their too much love to crosses and weak games after their transfer to Spartak. But there is one thing we should respect them for. In 2013 they founded football club Domodedovo that after only one year managed to join Professional Football League (PFL), where they are today.

'The aim of Domodedovo football club foundation is to attract people to matches, to make parents come with their children, to make them interested,' – noted Dmitriy Kombarov on radio SportFM. 'We come to matches when it's possible. People ask, take photos, it is very pleasing.' 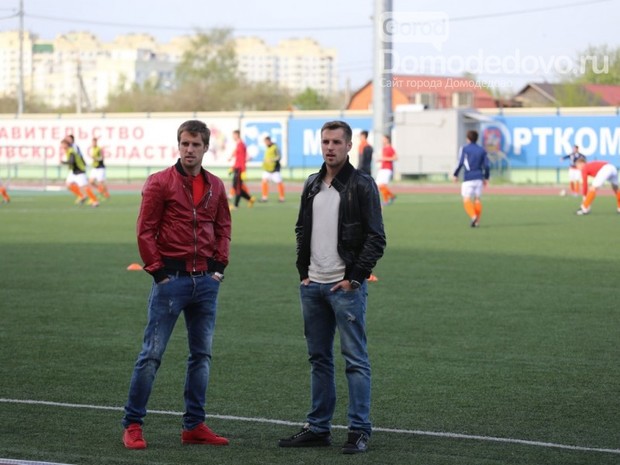 In 2013 Kombarovs brothers founded football club Domodedovo. On photo there are brothers on home pitch of FC Domodedovo of Avangard Stadium (goroddomodedovo.ru)

'We have 25 people in our team. And some come to watch,' — added Kirill Kombarov. 'Next year we are planning to start children sports school. We are not obliged to do it, we just want to make sport popular.

'They are very important in our club, we see them daily and conduct team events. They support us and share their experience,' — told a defender of FC Domodedovo Evgeniy Kirisov in an interview to 'Soviet Sport'. The main idea of the club is to attract children and teenagers to play football. Brothers told lately that they are going to open a school at the football club, in other words, they will develop as usual. Maybe FC Domodedovo will be in Premier League in 10 years, who knows?

Another highly criticized football player of Moscow Spartak distinguished himself. The opening of the stadium, built on Denis Glushakov's own money, was in spring in 2014 in Millerovo.

The pitch for the arena was presented to the famous football player by the president of football club Lokomotiv Olga Smorodskaya. In its turn, local authorities improved landscape around sports venue, repaired access roads and put street lighting. At the opening day friendly match was held between Russian Football Premier League players and city football team. In spring in 2014there was the opening of the stadium in Millerovo, built on Denis Glushakov's own money. Photo: donenergo.ru

'Desire is the main thing. The idea of the project occurred two years ago. I hope the stadium will serve to local sport for many years. I am planning to open Children's and Youth Football School, where boys from 5 to 6 could train and to invite qualified coaches,' – told the midfielder of Spartak at the stadium opening.

Triple 'Spasibo!' was heard around new and smart stadium in Millerovo, that was decorated with banners of Moscow football clubs Spartak and Lokomotiv. Mothers and grandmothers one hour before the official ceremony, in spite of the hot sun, had their seats in small tribune and set the rhythm of welcoming, waving with umbrellas that saved them from the sun, and like with a baton of drum major of a marching band: 'Spasibo, Denis!'.

Earlier, in 2013, Shamil Lakhiyalov started to make his dream true – opening of a football school in Dagestan. Things are that the team doesn't have sponsors, and a player pays for himself for different tournaments and equipment. Shamil organized first open tournament of the football school Legioner.

However, the aim of the school Legioner is to create possibilities for every child to play football near their homes on school territories. That fact makes the project socially important. Shamil believes in school, despite the fact that it is hard to implement such a serious project without sponsors', investors' and state's support. The team doesn't have sponsors, and a player pays for himself for different tournaments and equipment. Photo: fc-anji.ru

'I feel that I have taken responsibilities and I can't cope with them a little. To be honest, I didn't expect so many children, but I don't want to refuse anyone. We already have our own achievements: our first pupil got to Anzhi Academy, he signed a contract with them. I meet with the coach Magomed-Rasul Akhmedov all the time and the director of Academy Magomed Isaev and we agreed to cooperate. They help us with equipment and balls. I told them immediately – we are not competitors, we are friends, if you help us a little, we will raise football players for you. If you like our player, we will give him without any conditions. We even ready to train according to your methods… But we would like them to take a couple of our coaches at their balance. So, we are for cooperation,' – told Lakhiyalov in an interview to 'Novoe delo'.

Also, the player said that his school has started to cooperate with Andzhi Academy recently, giving their best players. It is like a small pyramid. The school gains experience from Andzhi coaches instead, and more likely there is a financial support too.

Lakhiyalova is liked a lot in Legion. One of the official site section is dedicated to him and it is called 'Our president'. He is really respected among staff and players.

And there it is. And we talk about spoilt players-millionaires. It turns out that we shouldn't treat all alike.