The Kazan Conservatory and the Volga State University of Physical Education, Sports and Tourism have come up with an unexpected collaboration

How will the students of the Kazan Conservatory and the Sports University cooperate at the general festival, what does Rustem Abyazov complain about, what is the problem of modern composers and what hopes does Vadim Dulat-Aleev cherish? In the report of Realnoe Vremya from the round table discussion devoted to the problems of music education, there are answers to these and other questions.

At the Kazan State Conservatory named after N.G. Zhiganov, they discussed issues of musical art and education in Tatarstan. Distinguished and unexpected guests gathered at the round table discussion: for example, Rector of the Gnessin Russian Academy of Music Alexander Ryzhinsky. The head of one of the main music universities of the country has been visiting Kazan since Thursday — met with the teaching staff, shared his experience and discussed the burning problems of music education with a colleague, Vadim Dulat-Aleev. There were compliments to the host party:

“Kazan Conservatory is one of the most famous educational institutions in our country. For me, it is connected with my musical ideas about what quality is," Ryzhinsky said.

But since they were going to discuss problems, he talked about problems. For example, together with Deputy Minister of Culture of Tatarstan Yulia Adgamova, he drew attention to the great role that music schools and art schools play in the training of musicians. He also discussed the targeted admission of students: in his opinion, it should not be a way to infiltrate the conservatory, if it did not work out otherwise, but a method of cultivating “professional young musicians” for those regions that send them to the conservatory.

Putting in a word about the poor composer

Once again, they talked a lot about the composer's work: Chairman of the Board of the Union of Composers of Russia and Tatarstan Rashid Kalimullin once again stated that there are not enough composers in the country, and this is because the profession has lost its former prestige, and for some reason composers themselves only know how to write but do not know how to promote their works:

“A composer needs to know not only to write his own music, but also to promote it," the expert believes. “But there are composers who can only write music. And they write without prospects to make them known Then it all dies. Secondly, he writes and understands that no one needs it. As a result, he leaves the profession.”

Rashid Kalimullin once again stated that there are not enough composers in the country, and this is because the profession has lost its former prestige, and for some reason composers themselves only know how to write but do not know how to promote their works

The new rector of the Kazan Conservatory invited the conductors of the republican orchestras to the round table discussion. Among other things, he also listened to criticism. For example, speaking about how musicians are taught at the conservatory, the artistic director and conductor of the State Orchestra of Folk Instruments of Tatarstan, Anatoly Shutikov, suddenly complained that not enough attention is paid to the quality of training:

However, Shutikov, in his sweeping remark, did not go into details about how exactly it is necessary to “teach better”, why the future employment of a graduate is also the task of the conservatory and what mysterious “we” are not doing this. But despite this, the chief conductor of the orchestra La Primavera, Rustem Abyazov, unexpectedly agreed with him.

Abyazov complained that he was experiencing a lack of local personnel in his orchestra — he even complained that he had recently hired a girl from Yekaterinburg. However, Professor Zilya Sungatullina objected to him, suggesting that graduates of the conservatory work in the leading orchestras and theatres of the country, and rector Dulat-Aleev asked the conductor:

“Isn't your orchestra formed from our graduates?"

However, when Abyazov explained his personnel problem in more detail, it turned out that it was not only and not so much the conservatory that was “to blame” for it, as the competition for the best orchestras between several orchestras of the republic, in which La Primavera often loses to the State Symphony Orchestra and the opera theatre.

In Tatarstan, it was impossible not to touch on the ethnic issue. According to experts, there are not enough personnel who could convey to the listener all the richness of the Tatar language.

Not a foreign obcene language: collaboration of athletes with musicians

But they also talked about good things. The new rector of the conservatory is active and courageous, having not worked for several months, he is already coming up with interesting collaborations. Moreover, they are extremely unexpected: for example, for the conservatory, the academic year begins with a new cooperation agreement concluded... with the Volga State University of Physical Education, Sports and Tourism. Its vice-rector Natalia Grechannikova told:

“We decided to create a collaboration. I want our athletes, in addition to being good athletes, to be harmoniously developed, so that they carry culture to the masses. And they were not brought up on music, which is now going through Studesna, not through foreign music, which students listen to without understanding the translation (and there often, sorry, obsene language)...”

And in the exclusive comment for Realnoe Vremya, the rector of the Conservatory admitted: he hopes that there will still be an opportunity for the development of a full-fledged musical youth theatre on the basis of the opera studio of the Kazan Conservatory.

“The performances that the studio makes are very well received by the audience. In September, we had a tour in Moscow," said Vadim Dulat-Aleev. “These are real, ready-made musical performances. They were highly appreciated by both critics and the public. That is, our team is already functioning as a theatre. But we would like it to have some form of organisation that will allow us to work more intensively on productions and do them not two a year, but a little more...” 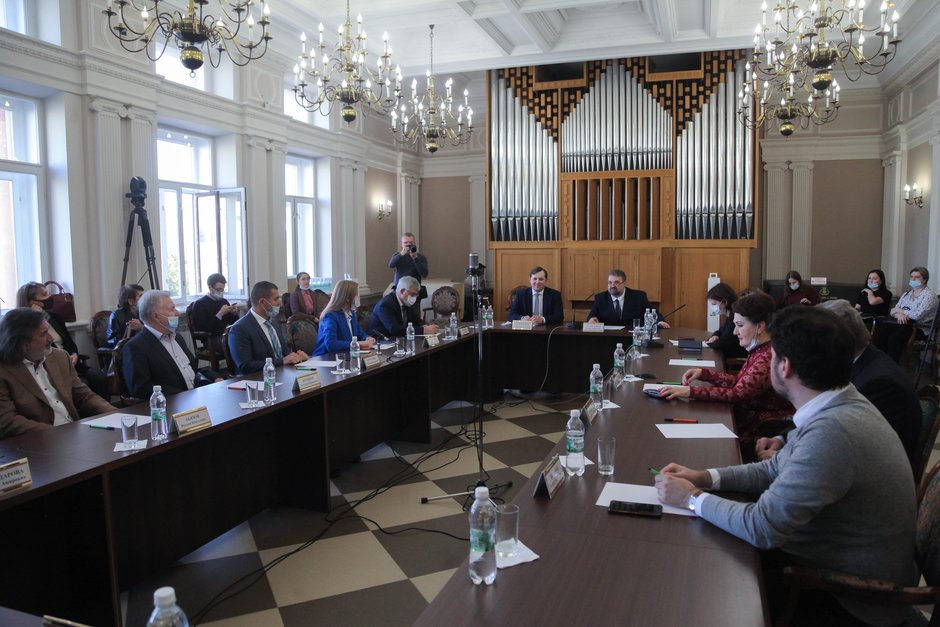