Tatyana Bakalchuk: “We didn't have time to discuss bonded zones, Tatarstan is already developing them”

The number of Tatarstan suppliers of marketplaces has increased to 2,000 over the period of self-isolation. The growing demand for e-commerce was discussed on 24 August in Innopolis, where President of Tatarstan Rustam Minnikhanov and CEO of Russian Post JSC Maksim Akimov met with the executives of leading retail companies. The meeting participants discussed the creation of a bonded zone, agreeing that the base for it should Russian Post, and KAMAZ handed over 15 of its modern trucks to the operator of the state postal network. Besides, agreements with ten companies that will create 550 jobs and invest almost 31 billion rubles in the development of innovations were signed in Innopolis.

In Innopolis, Tatarstan President Rustam Minnikhanov and Director General of Russian Post JSC Maksim Akimov met with representatives of the industry of e-commerce in the A.S. Popov Technopark. The head of the republic noted that over the past 10 years Tatarstan has demonstrated high macroeconomic indicators. In order to diversify the economy of single-industry towns in the republic, PSEDAs are created, their residents are provided with tax incentives and preferences for insurance premiums. As an example, the president cited the economic zones Alabuga, Innopolis, the logistics centres Wildberries, Ozon, which create jobs and attract investment. The president of Tatarstan sees great potential in the development of e-commerce. It is important to digitise the products produced by the republic's enterprises, said Minnikhanov, and Tatarstan has its own developments for this purpose.

“The crisis situation in the economy has shown that the chosen strategy for the development of this sphere has turned out to be timely. An increase in the number of republican sellers on these sites was recorded during the self-isolation regime which are more than 2,000. The number of suppliers has increased 10 times in one year. According to various estimates, the potential of the domestic e-commerce market by 2024 is projected from 2,8 trillion rubles to 7,2 trillion rubles. The potential growth of exports of Russian goods through cross-border e-commerce channels is predicted to be more than 10 times," said the Tatarstan leader.

Maksim Akimov thanked the republic for “excellent working conditions”. He noted that Russian Post is one of the largest infrastructure operators in the world, and the seventh company in the world by the number of points of physical presence. In almost 11,000 locations, this state structure with a monthly digital audience of 7 million people is the representative in one person of “corporate service: bank, communications, store, retail, and in general the only representative of the state”.

From December 2019 to May 2020, the number of online parcels increased 10 times, Akimov said. The share of processed online shipments amounted to 46%. The number of e-orders doubled (January-May 2020). But in courier delivery, Russia is six times behind Germany in terms of the number of parcels per capita, and 22 times behind China. The head of the Russian Post said that it is necessary to eliminate this gap. In the near future, the service is planning to install more than 5,000 post offices in the country, develop delivery, introduce an electronic power of attorney service so that one could forward postal receipts, as well as connect to personal account without paper documents and scans. According to Akimov, the service will form proposals and send them to the Russian government. The state entity is going to develop not only the import of foreign goods but also transit for customers located in Eastern Europe, as well as export.

Maksim Akimov noted that the role of regulators, of the ministry of finance and the ministry of economic development in relation to domestic producers is important in this process. He cited an example: the product that Russian Post has developed together with the Russian Export Centre — a zero VAT rate for retail exporters — is provided through the personal account.

In the first two quarters of this year, Russian exports via e-сommerce channels increased twofold as compared to the same period last year, said Veronika Nikishina, the director general of the Russian Export Centre JSC. According to her, an important partner product of the REC is the placement and promotion of SME products on electronic platforms with the help of state support, which gives a good synergistic effect. About 400 companies received such support in the first half of the year. Nikishina said that a store of Russian food products has appeared on the Chinese marketplace, thanks to which the company Akulchev managed to increase its export opportunities. Supporting the creation of the bonded zone, the expert noted two tasks at the state level. It is necessary to ensure the possibility of customs procedures directly in the bonded zone. “And most importantly, the unsolved problem is the possibility of returning goods from abroad sold through e-commerce channels, without duties," Veronika Nikishina added.

Together with Russian Post, Aliexpress Russia is launching the scheduled cargo flight Guangzhou-Kazan, which will operate two to three times a week. Its head Dmitry Sergeev drew attention to that Russia needs to make more active use of its transit geographical potential, developing exports as well.

“Not forgetting about SMEs, so that later there will be someone 'to exploit”

“Tatarstan keeps its finger on the pulse. We barely has time to discuss the bond zones, it turns out that Tatarstan, as always, has already started to develop these zones in advance, so we could gather here," said Tatyana Bakalchuk, the director general of Wildberries PLC.

In recent times, this company has not only reduced its commission for partners but also simplified the process of working with them. At the beginning of the year, there were about 20,000 of them, according to the director, this number increased fivefold in the spring. Among the suppliers, there are 23,000 individual entrepreneurs and 2,000 self-employed, Bakalchuk said. According to her, there was a small but still growth of manufacturers of textiles, clothing, food, which are sold on trading platforms — 10-15%. Last year, the amount of Wildberries exports amounted to 13 billion rubles, and for 6 months of this year — 10 billion rubles.

Yet the company's chief executive fears for the fate of domestic small and medium-sized businesses. The meeting was attended by the first deputy minister of economic development of the Russian Federation, Andrey Ivanov. The head of Wildberries appealed to him with a request that the government should not forget about Russian manufacturers when creating bonded warehouses and, together with the Russian Post, consider support measures for them, “so that the sprouts of entrepreneurship that are emerging in our country could develop, respectively, so that then there is something to “exploit”.

Leading marketplaces do a lot to create sales for manufacturers, “in order to attract the manufacturer to them”, says Alexander Ivanov, the president of the E-Commerce Russia Association. But this complex process should be a simple mechanism so that one can easily get a refund. He noted that wholesale cargo is not cleared, the moment of “customs clearance” comes at the retail stage. According to Ivanov, it is important to think through the reverse technological operation of customs clearance, so that, for example, it was possible to take out unsold goods back. This option is not available yet. Besides, the speaker noted that it is necessary to change the ratio of imports and exports, which is now about 100 to 1 in Russia.

The Tatarstan science city also hosted a bilateral meeting of the management of Russian Post JSC and Innopolis University. The parties will develop joint research and innovation projects in the field of distributed registry, data analysis, artificial intelligence, robotics, and information security. The students of the IT university will have the opportunity to train in the divisions of the Russian Post, and the graduates will have the opportunity to find employment in the company.

Later, at a meeting of the supervisory board chaired by Rustam Minnikhanov, agreements were signed with partners and residents of Innopolis special economic zone, who invest almost 31 billion rubles in approved projects. For example, Rosenergoatom is going to build a Data Processing Centre in Innopolis, and the Russian Post is going to open an IT branch. Ten companies will create 550 jobs.

“Today, the Innopolis project is a new point of realisation of the scientific and intellectual potential of our country, and more and more new companies choose Innopolis as the location of their divisions and development centres. However, our goal is to attract not just companies but companies with interesting commercial projects. Young professionals come to Innopolis not so much for the sake of earning money but for the opportunity for professional development and participation in solving large-scale tasks," said Deputy Prime Minister of the Republic of Tatarstan Roman Shaykhutdinov.

At the site of the IT Park, KAMAZ PJSC handed over 15 new cars to the Russian Post, which will be used in Tatarstan. There are five trucks in this batch, two of them are the newest flagship mainline KAMAZ-54901 trucks. During 2020-2022, more than 500 cars of the Kama automobile plant will be transferred to the state agency.

“Reliable transport logistics is necessary for the company to work effectively. We have the opportunity to supply high-class cars produced in our republic to the Russian Post," said Rustam Minnikhanov.

Maksim Akimov thanked Tatarstan postal workers for their daily work, especially in the difficult conditions of recent months. “We would not have coped with this task without constant support from the leadership of the Republic of Tatarstan. This support is provided not only by the regional authorities, but also by the industrial sector. Our largest industrial partner is KAMAZ," he stressed.

In conclusion, Innopolis launched ArtSpace — a two-storey building with an area of 2,2 thousand square metres — a place for recreation, education, creativity, events and film screenings. Citizens will have the opportunity to engage in aircraft modeling, robotics, computer assembly, theatre, dance, music, and drawing. 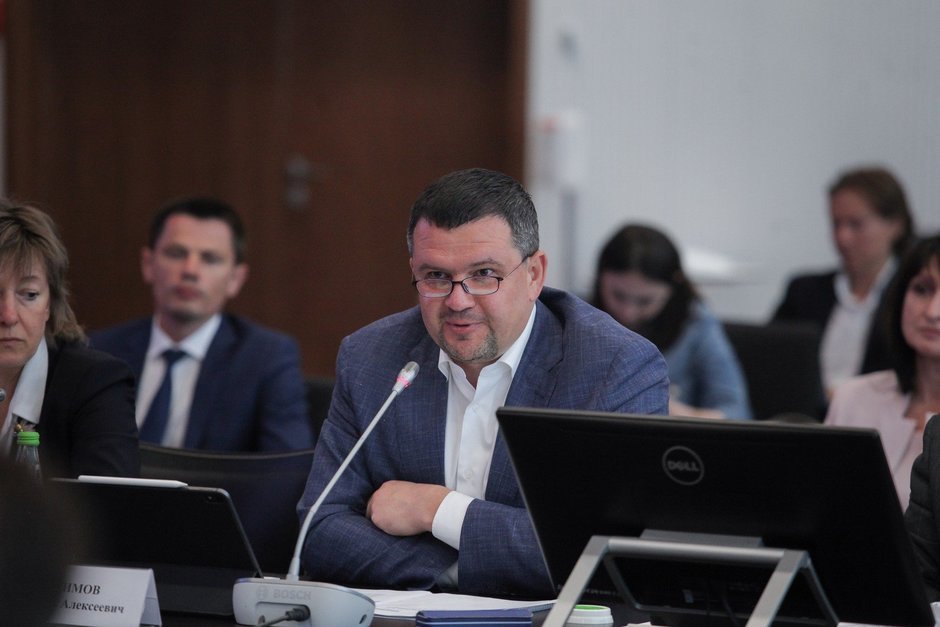