Kazan health workers about Gergiyev’s concert: ‘Such support is vitally important for us’

The Mariinsky Symphony Orchestra under Valery Gergiyev performed a concert for the staff and patients in COVID hospitals in the courtyard of the new building of the Republican Clinical Hospital for Infectious Diseases in Kazan on 15 August. Read in Realnoe Vremya’s report more about the famous music collective’s tour and how it was received in the hospital for infectious diseases.

On 9 August 2020, Valery Gergiyev and the Mariinsky Symphony Orchestra went on a concert tour to the cities of the Moscow Easter Festival’s route, which has traditionally been held for 20 years already. But the format of the event has changed and the list of cities has significantly reduced because of the pandemic. The orchestra can’t visit all 60 regions. The musicians will be performing until 20 August only in the cities with a favourable epidemiological situation, and Kazan is among them. The concert of the tour already took place in Moscow, Tver, Veliky Novgorod, Tikhvin and Oryol.

During the year of celebration of the 75th Anniversary of the Victory, special attention is paid to hero cities, cities of military glory and cities of labour glory — it is an honorary title the Tatarstan capital was recently awarded. During the pandemic, doctors and volunteers became real heroes. This is why the musicians are giving additional concerts — especially for health workers — besides scheduled charity performances. Almost 60 performers of the Mariinsky orchestra played masterpieces of the world classics for them in the rain outdoors, in the courtyard of the new building of the Republican Clinical Hospital for Infectious Diseases on 15 August.

A big tent was put up for the guests under which they hid from the bad weather. As musician Timur Martynov — the first trumpet of the orchestra — said, such humid weather is no good for wooden instruments. But “copper instruments are universal, they can be played in any weather conditions. Bad weather rather influences the physiology of the performer — it is another load, and the Mariinsky musicians play the latest Easter festival outdoors”.

Before the very beginning of the concert, the musicians were tested for coronavirus in the corridor of the hospital — they do the testing in every city. And instead of journalists doctors are travelling with them by train.

When the maestro appeared, the health staff and musicians stood up and welcomed each other. During the performance, sheets traitorously ended up in the puddles though they were attached by clips. But the orchestra with its conductor was inimitable. Valery Gergiyev moved in time with music, artfully ruled the orchestra, cheered up the musicians with gestures, and they had a smile on their faces. The hospital’s staff was amazed by the famous classic and gave the orchestra a standing ovation. The orchestra performed compositions by Tchaikovsky, Rimsky-Korsakov, Glinka, Mendelssohn, Strauss and other famous authors. Doctors and nurses appeared in balconies as well. While patients listened to the music near the windows in their wards.

Music therapy for patients and doctors

“Treatment doesn’t stop. Everybody who helps residents of the republic in COVID hospitals has been invited here today. It is a big honour for us: world-class musicians agreed to give a small concert for our colleagues. About 100 doctors and health workers have gathered here. Music is eternal, moreover, music performed by such maestros. In any case, music therapy will have a positive impact on both patients and those who treat them. Our doctors were pleased to receive the invitation, they came with flowers. It is a great occasion for us, it is a precedent when such a concert is given in the courtyard of the hospital for infectious diseases,” said Chief Doctor of the Republican Clinical Hospital for Infectious Diseases Marat Gataullin.

“We are glad that such world-class famous musicians arrived here, in our republic, the city, our hospital. It is a unique chance for health workers to listen to the great master’s orchestra. Doctors, junior staff, representatives of the department, everybody who is linked with the service of the hospital have come today,” said Docent of a department of the medical academy Olga Lazarenko.

“It is so great, Gergiyev is a world figure, and the weather isn’t an obstacle. It is a holiday, a miracle!” head of the Department of Children’s Infections of the medical university Vladimir Anokhin shared his emotions.

“Our morale is always high. The staff is ready to treat, be with our patients. It is, of course, more pleasant to work in new, more comfortable conditions. But we have hardly been working since February, new patients have been arriving. Such support is vitally important for us to keep working. And it is a big present that will cheer us up,” believes head of Unit No. 15 of the hospital for infectious diseases Dina Semyonova.

“We welcome the famous Mariinsky Theatre with its amazing programme in the hospital that has just recently opened its doors for patients. We are hosting the event with limitations, there is social distancing, as you can see. There will be another programme in the Kremlin in the evening. I am expressing words of gratitude to Valery Gergiyev for this concert. Might a good mood, amazing classic music help fight the coronavirus as well as all the actions doctors take. Today everything is dedicated to them,” claimed Tatarstan Vice Premier Leyla Fazleyeva. 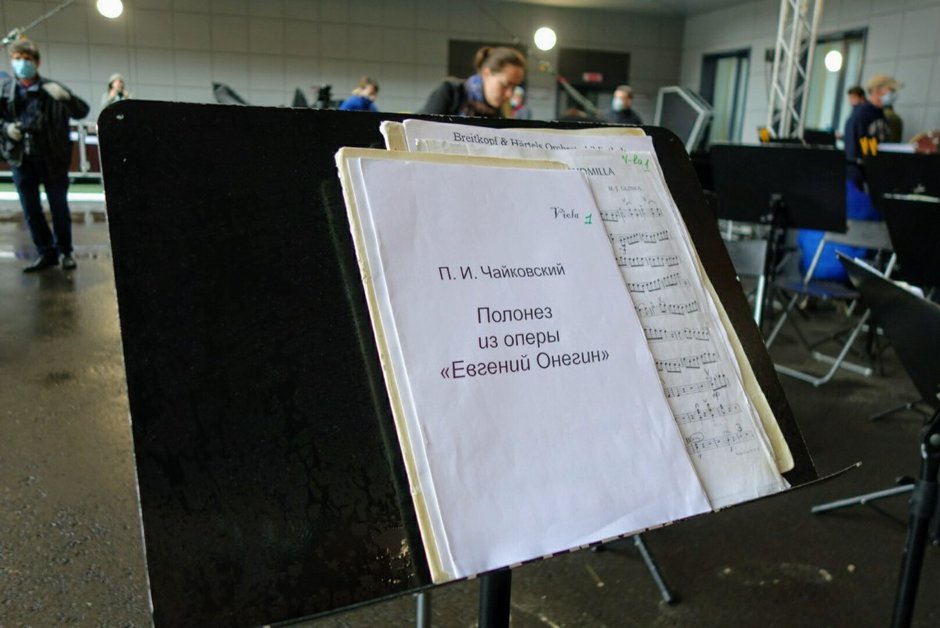