Pavel Shmakov: ''The weakness of the ministry’s position was visible''

A claim of director Solnce school from Kazan Pavel Shmakov against three federal ministries – education, science and higher education and justice – was considered in the Supreme Court of Russia on 9 October. In the claim, Shmakov asked to acknowledge regulations of Federal State Education Standards void, as they don't presuppose compulsory classes of official languages of republics. The session lasted for six hours, a break until 11 October was announced. Realnoe Vremya reached out to the claimant to know the details of the process.

''The weakness of the ministry's position was visible''

The session in the Supreme Court began at 10.00 and lasted until 16.00. As Pavel Shmakov told Realnoe Vremya, the small hall the trial was in, was full: there were about 10 participants and some 15 people who ''felt pity''.

Jurist of Solnce school Anna Ovchinnikova and two Moscow representatives lawyer Timur Zaripov and jurist Maksim Gromov defended Shmakov's interests. As for representative of the Ministry of Education Pankova, she seemed to the director of Solnce school incompetent and inexperienced. According to him, she's just recently had a bachelor's degree and even doesn't have a Master's in Law.

''The weakness of the ministry's position was visible. For some reason, it provided a very unqualified representative. She's just had a bachelor's degree in a law faculty. The ministry has a big number of very qualified jurists. Perhaps it was done to lift the responsibility from the ministry further, to say it was this person's guilt,'' Pavel Shmakov presupposes. He says the defendant's position boiled down to the assumption that an official language is equal to a mother tongue.

''They try not to notice or eliminate the issue that the official language is compulsory by all means,'' Shmakov emphasises. 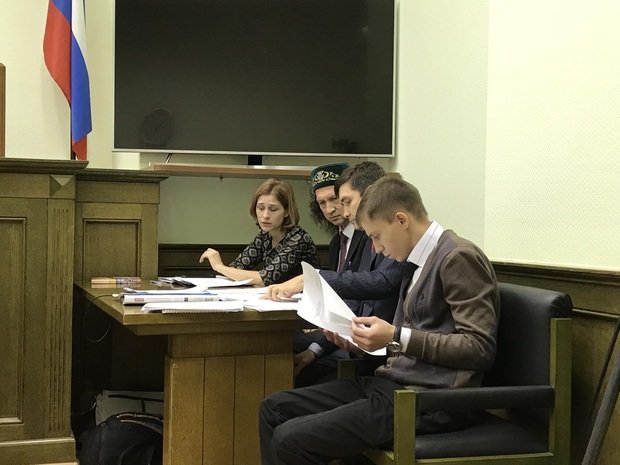 The session in the Supreme Court began at 10.00 and lasted until 16.00. Photo: Ruslan Nagiyev

''I was fined despite the federal law, only according to the FSESs''

It should be reminded that the Supreme Court of Russia accepted Pavel Shmakov's claim in September. The director of Solnce required to acknowledge some regulations of federal state educational standards void, as they didn't presuppose official language classes in a republic. It was noted in the claim it's the Russian and Tatar languages in Tatarstan. The FSESs consider only Russian Language and Literature as compulsory subjects as well as Native Tongue and Native Literature.

The complainant stuck to the same position in the Supreme Court too.

In a talk with Realnoe Vremya's correspondent, he reminded that employees of the Prosecutor General's Office came to Solnce school last October-November and began to ask pupils what for they studied the Tatar language, while the children's parents weren't present during the talk. Then there was a trial, as a result of which Shmakov was fined 10,000 rubles.

''I was fined on the same day for not having a gym at school, though the school had been lacking a gym for five years. But we will have it in two months. Most importantly, it was done on the same day, during the same process. In other words, it was done to increase the fine and to make me understand the fine was imposed for the Tatar language,'' the school director is sure. 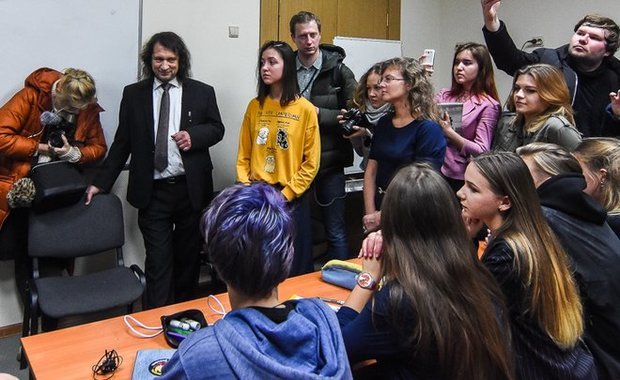 The director of Solnce required to acknowledge some regulations of federal state educational standards void, as they didn't presuppose official language classes in a republic. Photo: Oleg Tikhonov

Back on the road

According to Shmakov, the court was to switch to debates in the next hearing (on 11 October). But he's sure there had already been debates – judge Yury Ivanenko asked both sides many questions, there were many debates.

''The judge is qualified, the process was conducted in a very smart way. Whatever decision he would make – it's quite possible I won't like this decision – it's seen he's very competent,'' the director of Solnce school notes.

However, he doesn't lose hope for a positive outcome. After the 6-hour trial, Pavel Shmakov went to Kazan but was going back to Moscow on 10 October.