Kazan Muslim Film Festival will open in less than a month, on 4 September. On 26 July, chairman of the selection panel film expert Sergey Lavrentyev gave a press conference where he told about the tendencies dominating in the festival's films and complained there were fewer film festivals. Realnoe Vremya tells the details.

''We should be given milk for the hazard''

967 applications have been submitted for the Kazan film festival this year, their growth tendency is plain to see. But, according to Sergey Lavrentyev, this both tells about the popularity of our festival and doesn't. One of the reasons for the rise in applications is that the number of film festivals in Russia is becoming lower, many of them closed due to a lack of money.

''The Kazan film festival has an element of prestige. But this, unfortunately, isn't the most important thing. The number of film festivals has suddenly shrunk in Russian regions this year. This is why there were submitted more applications to the remaining festivals. But this is not the most important thing. Nothing from what was needed just 10 years ago is needed to shoot a film today: a film studio, pavilions, a big shooting crew, equipment, people who service this equipment. A camera and sometimes even a mobile phone is needed today to shoot a film, and a group of mates who surround the person shooting the film. They've shot a film, showed it to their relatives but want something more. It goes without saying it's impossible to release such a film in the cinema, but there are film festivals. Their number has reduced, but there is plenty of them in the world anyway. So such films are sent to all these festivals,'' Sergey Lavrentyev explained. 967 applications have been submitted for the Kazan film festival this year, their growth tendency is plain to see. Photo: Maksim Platonov

He joked that in this respect the job of selectors resembles what used to be called hazardous to health, the selectors, in fact, should be given milk for the hazard. The Kazan film festival's selectors watched the works sent to the festival from January to 1 July. Three people worked in the selection panel, so their load was big enough. ''It's possible to find diamonds in this quantity of ore, but this requires meticulous labour,'' Lavrentyev explained.

By the way, theologian Rustam Batrov was one of the consultants of the selection panel. The post of a consultant at the festival appeared after several scandalous stories linked with the selection of films that didn't comply with the Muslim film festival's ideology. As Lavrentyev noted, it was very comfortable to work with Batrov, and the selection panel members coincided with him in their assessments.

''Only Mullah is in the main competition''

Very Sergey Lavrentyev together with director of Tatar Film Milyausha Aytuganova created the final programme of the festival. So 10 films were selected for each of the festival nominations, the number of films is higher only in the nomination Tatar Film, it has 15. ''The films shot in Tatarstan should be shown at the Tatarstan festival,'' the film expert noticed. 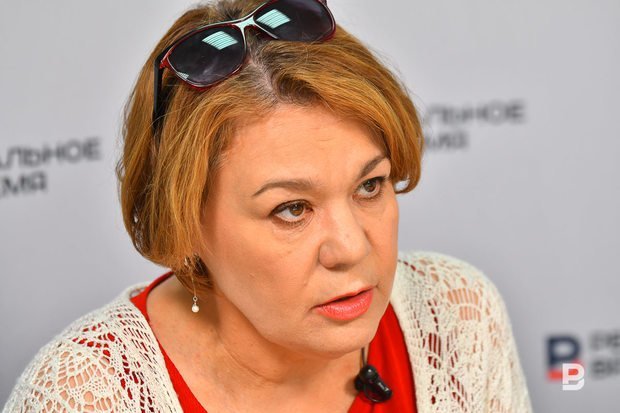 Milyausha Aytuganova explained it was linked with a summit held in Kazan during this time and Muslim fasting. Photo: Maksim Platonov

In the film expert's opinion, the Kazan festival is full of programmes, and, obviously, it will be necessary to correct next year. As he said, the festival in 2019 won't be in September as usual but in April.

Milyausha Aytuganova who was present at the press conference explained it was linked with a summit held in Kazan during this time and Muslim fasting. It's unknown so far if the festival will change its period later on.

Only Mullah film has been included in the main festival programme among Tatarstan films. In Lavrentyev's opinion, it would be incorrect to increase the share of our films as the festival hosts. Although, as a rule, three-four French take part in the Cannes, but Lavrentyev considers this unsuccessful experience.

Sadly, Ildar Yagafarov's film Baigal isn't on the competition programme. One of the reasons is that director of the Kazan film festival Milyausha Aytuganova is its producer and performer of one of the leading roles. However, Sergey Lavrentyev highly appreciated Baigal saying that there can be an interest in Tatarstan after Baigal like the world became interested in Japan after Akira Kurosawa's Rashômon. ''This film is fresh, so to speak, it's full inside. It's very interesting visually, meditative, it's meditation that's a characteristic of Japanese cinema,'' Sergey Lavrentyev evaluated Yagafarov's film. Sergey Lavrentyev highly appreciated Baigal saying that there can be an interest in Tatarstan after Baigal like the world became interested in Japan after Akira Kurosawa's Rashômon. Photo: planeta.ru/campaigns/baigal

He supposes a lot of effort should be put now for Baigal's good release. For this, naturally, regional film chains need to be developed, what Tatar Film is actively doing now.

In Sergey Lavrentyev's opinion, the films that were selected for the contest's nominations have better artistic worth than the films that had been sent to Kazan in previous years. Many directors paid tribute to the social topic, for instance, emigrants' problems or disabled people.

There is a new nomination this year too. Films for kids will compete in it. Unfortunately, they aren't shot a lot in the world now, it's impossible to earn money on films for kids. This is why almost all films for kids sent by the selectors were nominated. Most of them are cartoons, there are many short-length Tatarstan cartoons.

In answer to journalists' question about favourites of the film festival, Sergey Lavrentyev replied they couldn't speak about it. ''It will be an indirect pressure on the jury members,'' the film expert noticed. According to him, it's absolutely impossible to guess who will win.

It should be reminded the festival will traditionally open at Pyramid, but it has changed its location this year and will be Riviera Culture and Leisure Complex. It's projected to close the festival at Hermitage club.