Enterprises of the gas and petrochemical complex of Tatarstan sold products at 1,2 trillion rubles last year. Kazanorgsintez PJSC made a considerable contribution to the development of the sector: last year, the enterprise made commodities at 71,4bn rubles, which 94,9% of the indicator in 2016. Prices in the world and Russian markets affected the slight reduction of the sum. The growth of production volume in size partly compensated the influence of the price factor – volume index was 101,7% compared to the level in 2016. Realnoe Vremya examined Kazanorgsintez's results given in the company's annual report.

Kazanorgsintez PJSC's revenue totalled 72bn rubles in 2017, which is 3,4bn rubles less than in 2016. The current situation with prices in the polyethylene market had the greatest influence on the reduction of revenue. Net profit reached 15,24bn rubles.

However, the enterprise's financial stability is confirmed by its equity, which was 53,66bn rubles last year. To compare, in 2016, it reached 47,50bn rubles. Kazanorgsintez's capitalisation significantly increased: from 77,6bn rubles in 2016 to 143,6bn rubles in 2017. 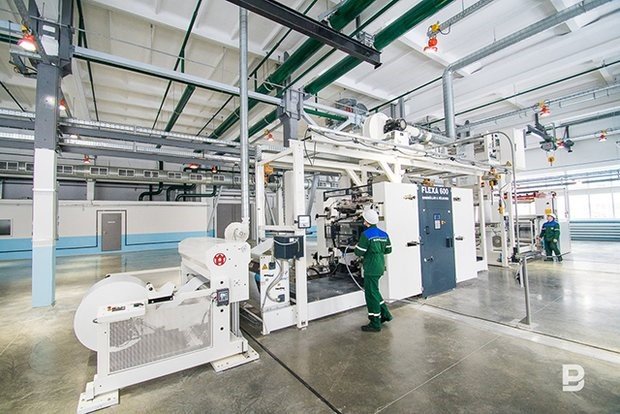 The enterprise's development allowed to completely pay off all loan debts of Sberbank of Russian PJSC last August. We should remind the credit was taken out in December 2009, and the loan was due for repayment in June 2018. The borrowed money was sent to restructure the company's debt in previously taken out credits to finance an investment programme within which two new bisphenol A and polycarbonate plants were built and there was big reconstruction in the ethylene, LDPE and phenol and acetone plants.

Kazanorgsintez's stable financial state is affirmed by an international credit rating. In 2017, Fitch Ratings affirmed Kazanorgsintez PJSC's long-term issuer default ratings (IDRs) at B level and changed the outlook of the ratings from 'stable' to 'positive'. By late 2017, the enterprise didn't have debts to credit institutions.

In 2017, Kazanorgsintez produced over 1,7 million tonnes of organic synthesis products. The indicator of the use of production capacities was 94%. The deficit of the main feedstock is still the main reason of why the capacities aren't used to the maximum. At the same time, Kazanorgsintez manufactured a record low-density polyethylene volume in the enterprise's history – 508 million tonnes.

The structure of commodities in 2017 didn't change in comparison with 2016. Ethylene polymers and co-polymers traditionally provided the biggest revenue – 71,3%, polycarbonate gave 14,3%. The volume of certified products in the system of the State Standard of the Russian Federation totalled 95,1% in the total commodity volume of Kazanorgsintez PJSC.

In the domestic market, Kazanorgsintez sold commodities at 56,9bn rubles, which is 8,2% less than in 2016. Export sales rose by 12,5% last year. Products for 1,51bn rubles were sold abroad. Export supplies were, first of all, oriented to the countries with higher contract prices. Last year, products of the petrochemical enterprises reached markets in 31 countries of the world. Croatia and Armenia became new consumers of Kazanorgsintez's products. Supplies to Georgia renewed too.

How to save more than 1,2bn rubles

Meanwhile, Kazanorgsintez worked to increase production efficiency. First of all, the implementation of energy and resource efficiency measures enabling to minimise the consumption of energy resources per product is meant. The 'Long-Term Energy Saving and Energy Efficient Programme in 2011-2015 and until 2020' was approved at Kazanorgsintez. The adopted programme presupposes the implementation of advanced technologies, materials and equipment that ensure the technological potential of energy saving is mastered. The measures aimed to increase the reliability of energy supply, reduction of electrical energy and water consumption were taken in 2017 within the programme. Energy saving and energy efficient equipment was implemented last year. It allowed to reduce steam consumption costs from the external source – Kazan CHPP-3 – and increase its own steam production. Obsolete lamps were substituted for LED energy saving ones in Kazanorgsintez's divisions as well.

Its own steam and hot water production increased by 16,000 Gcal or 1,2% than in 2016. The indicator of thermal capacity dropped by 5,4% than in 2016. Energy consumption of commodities reduced by 5,14%. The result, which was achieved, is conditioned by stable operation of the enterprise's plants and implementation of measures designed to save and efficiently use energy resources.

As a result, an economic effect equal to 226 million rubles was achieved. Over 1,2bn rubles were saved during 7 years of the action of the 'Long-Term Energy Saving and Energy Efficient Programme in 2011-2015 and until 2020' at Kazanorgsintez PJSC.

The projects will allow to increase the conversion of liquefied hydrocarbon gases as feedstock of pyrolysis, augment ethylene and polyethylene production volumes. It's expected feedstock and energy resource consumption standards will improve and the negative impact on the environment in cumene production in Bisphenol A Plant will reduce.