Belarus wants to make money on air transit, and Tatarstan — on guests from Europe

Kazan is expecting the launch of another direct flights — this time from Minsk. As the correspondent of Realnoe Vremya found out, Belavia's expectations for the new destination are very high — at a frequency of flights four times a week, the airline expects the average load of 70-75% and does not exclude that the number of flights can be further increased. Meanwhile, Tatarstan is already thinking how to attract even more tourists and planning weekend tour offers for the Belarusians. Read the details in our material.

From discussion to action

The State Committee for Tourism of the Republic of Tatarstan has discussed how Tatarstan is establishing the air bridge with Belarus. The reason for the meeting with journalists was the launch on April 26 of Belavia's direct flights between Minsk and Kazan, which symbolically coincided with a visit of the delegation from Tatarstan to Belarus headed by minister of industry and trade Albert Karimov.

''In the narrow format six months ago we discussed communication issues that would allow the Republic of Belarus and the Republic of Tatarstan to resolve issues on implementation of tourism potential of the parties, which are quite promising and multifaceted,'' Oleg Isaev, the head of Kazan branch of the Embassy of Belarus in Russia, recalled the prerequisites for creation the flight connection.

He called the Belavia's entrance into Tatarstan one of the stages of this work and, taking advantage of the moment, advertised tourist opportunities of Belarus, among which — the unique natural potential, rich cultural heritage and a large sanatorium complex, where, by the way, more than 50% of the clients are from Russia.

Andrey Gursky, the head for marketing and foreign economic activity department of Belavia, told more about the work of the airline and the new flight connection. 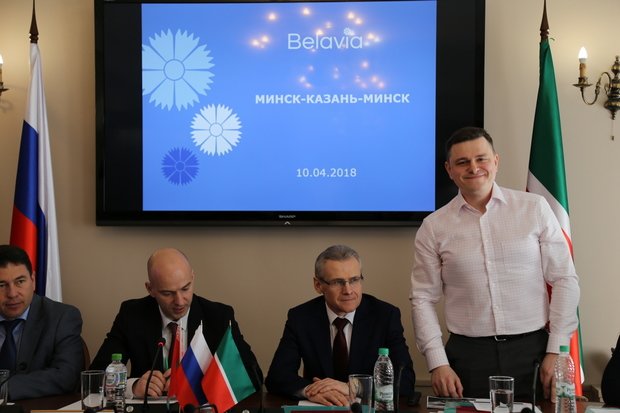 If the loading grows and the material and technical base allows, we are ready to increase the frequency of flights,'' Andrey Gursky said. Photo: tourism.tatarstan.ru

In March, the airline celebrated its 22nd anniversary. As Belavia approached the anniversary, it had a fleet of 26 aircrafts. Earlier, Belarusian airlines used Russian aircrafts, but the last TU-124 ended its career in December 2016. Now the airline has three types of aircrafts: Boeing, Embraer and CRJ. According to the speaker, in the near future they expect additions to fleet in the form of three Embraers, another contract for the supply of five aircrafts of this brand has been signed recently — they will be delivered by 2019 and 2020.

Another window to Europe

To date, Belavia's route network includes 27 countries and 48 points. From April 26, it will be added with Kazan, and from April 27 — with Rostov-on-Don. Between Minsk and the capital of Tatarstan the flights will be four times a week. From Minsk the flights depart at 11:50 PM MSC on Tuesdays, Thursdays, Fridays and Sundays and arrive at the airport of Kazan the next day at 2:10 AM. The return flight from the capital of Tatarstan takeoff at 3:40 AM on Mondays, Wednesdays, Fridays and Saturdays with arrival at the national airport Minsk at 6:00 AM.

The passengers of Belavia will be transported by Embraer 175 with 76 seats. The ticket cost cannot be called low, but it is not pricy. The prices start from 106 euros one way and 199 euros — round trip.

The fact that the airline decided to enter Tatarstan with four flights a week indicates its serious expectations. This assumption is confirmed by the carrier's plans.

''We are planning the average load around 70-75% during the year. And if the loading grows and the material and technical base allows, in principle, we are ready to increase the frequency of flights,'' Andrey Gursky told in response to the question of Realnoe Vremya. ''Accordingly, we expect that those operators with whom we work in Europe will also orient their passengers to Belavia's flights, and thus we will receive an additional tourist flow there,'' Sergey Ivanov shared the expectations. Photo: tourism.tatarstan.ru

It is assumed that far not everyone will go on trip from Minsk or consider the city as an end point. In the capital of Belarus, the airport is a window to Europe. And not only.

''We docked the flight from Kazan to almost all destinations — Amsterdam, Barcelona, Budapest, Prague, Lviv, Kiev, Nice, Stockholm, London, Frankfurt and so on,'' the speaker listed the destinations.

Tatarstan would not be Tatarstan if it did not take advantage of the opportunity to attract more tourists to the republic with the opening of a new air service.

''To date, based on the pilot programme, we together with the operators of Tatarstan will create tour offers for residents of Belarus, and we are planning to hold a meeting in Minsk at the end of April to present these offers to Belarusian tour operators and to try to convey them to the inhabitants of Belarus as much as possible through the channels of promotion, through the media,'' chairperson of the State Committee for Tourism of Tatarstan Sergey Ivanov told in response to the question of Realnoe Vremya.

The republic also expects much from the residents of Europe, who now can get to Kazan through Minsk.

''Accordingly, we expect that those operators with whom we work in Europe will also orient their passengers to Belavia's flights, and thus we will receive an additional tourist flow there,'' the chairperson of the state committee shared the expectations. Andrey Egorov says it is planned to organize direct flights to Batumi and Budapest. Photo: mindortrans.tatarstan.ru

In part of sending Tatarstan tourists to Minsk, the state committee expects to carry out similar work with the formation of weekend tours together with the National Tourism Agency of the Republic of Belarus and Belavia.

After Minsk, in the summer season Kazan can expect direct flights from Batumi, said deputy minister of transport of Tatarstan Andrey Egorov. The work on organization of flights to Budapest continues. However, so far nothing definite can be said about this destination. As well as concerning China. ''We remain hopeful that we will still fly to China,'' Egorov vaguely explained.