Denmark persuades to fight against corrosion by the example of Kazanorgsintez

The discussion of technological know-how, brought up at a meeting of the Board of Directors of Tatneftekhiminvest-Holding JSC, was held under the sign of ''smart'' economy on Thursday. The losses of the world economy from corrosion of pipelines cost $2 trillion annually, rubber manufacturers bear huge payments due to disposal fees. How to ''block'' the leakage of production expenditures? Rockwool Russia and Kazanorgsintez will improve the standards of thermal insulation materials for protection from corrosion ''eroding'' any business. Read more in the article of Realnoe Vremya.

The board of directors meeting, held on Thursday, became electoral. Before the presentations of know-how began, the members of the Board of Directors once again elected Tatarstan President Rustam Minnikhanov as Chairman of the Board of Directors of Tatneftekhiminvest-Holding, giving him 100% of the votes. In response, the head of the republic was brief. ''Thanks for the confidence,'' he said and then announced the working agenda, formed based on the results of the previous presidential business trips and contacts with representatives of large businesses. The technologies and ideas he saw were brought up for public discussion of the leaders of Tatarstan companies.

It appears that the most fruitful was the business trip to the St. Petersburg International Economic Forum 2017, where the urgent production topic of the struggle against corrosion of pipelines under thermal insulation was taken up. As you know, the greatest results have been achieved in this field by the Danish company Rockwool. The representative of the Russian office of Rockwool Russia Roman Ayvarzhi (the photo on the poster) held another presentation that became the second. To give a clear picture of importance of the problem, he cited the following figures. ''According to the data of the international organization on combating corrosion, it costs the global economy more than $2 trillion annually. The petrochemical industry bears half of the losses,'' he warned.

Then he tried to reveal the ''secrets of economy'' of the manufacturers of thermal insulation, which in practice lead to financial losses for customers. According to him, in the pursuit of profitability, some manufacturers of thermal insulation ''see for themselves an opportunity in reducing expenditures for hydrofobisation'', which prevents the penetration of water into the pipelines, and thus protects from corrosion. He believes that it is important to strictly regulate the chemical composition in production of heat-insulating materials. The meeting of the Board of Directors became electoral. The council members re-elected Rustam Minnikhanov as its Chairman

''European experience suggests that there is the need to regulate the level of water soluble chlorides. In Russia, there is an interstate standard, which regulates the methods of determining residual amounts of chloride ions, but when forming requirements for insulation materials they often forget about it,'' said Roman Ayvarzhi, while this standard to thermal insulation materials is obligatory included in the project documentation in Europe.

Ayvarzhi proposed to adopt the European standards for procurement of insulation materials by Tatarstan companies, basing on the experience of Kazanorgsintez. According to him, this enterprise has already developed and implemented requirements on the content of ions of water soluble chlorides and sodium salts in insulation materials and the level of their application is regulated. ''There is a good opportunity to unite our scientific and technical potential and to develop requirements so that they were sufficient, objective and nonredundant,'' he said.

According to the calculations of Roman Ayvarzhi, a more expensive per unit product in the end turns out to be cheaper, ''if the comparison is done properly and correctly, taking into account costs for installation and technical lifetime''. In the end, a more expensive, innovative product turns out to be by one-third cheaper. ''To improve the efficiency of procurement in the oil and gas industry, we propose to develop and implement a methodology for selection of thermal insulation materials taking into account the cost of owning and operating at all oil and gas facilities,'' he made another offer.

The president liked the idea of standardization of insulating materials in procurement in Tatarstan. ''We should adopt the standard of project solutions (for thermal insulation),'' he recommended. ''If we do something, we need to do it according to the standards. We have a huge number of pipelines that are isolated, as practice shows, not always qualitatively.'' 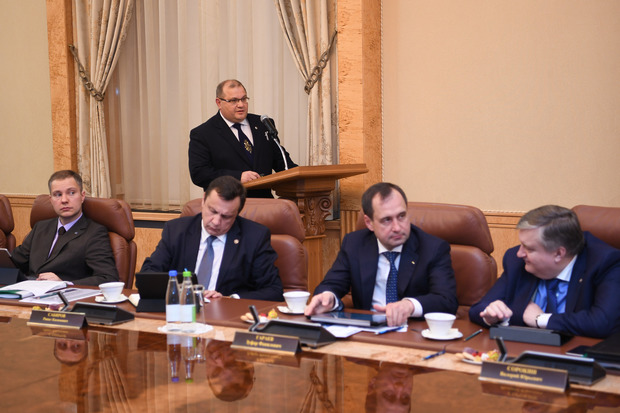 A ''bonus'' from Kaluga at 80 million rubles

Another source of loss is associated with ''tire'' garbage, recycling of which can bring a benefit. These ideas have long been known, but few were able to get rich due to them. But the director of the Kaluga innovative machine-building enterprise Bonus Mikhail Makarov, invited personally by the president of Tatarstan, believes that the Tatarstan business should start processing the ''tire'' debris to obtain modified reclaimed rubber.

Bonus itself is engaged in manufacturing of test stands for automotive engines. ''At our equipment it was adjusted the engines of the team KAMAZ-Master at the Yaroslavl factory of diesel equipment,'' he said, after which it became clear how he got to Tatarstan. At the same time, the company invented the technology for production of equipment for processing the worn rubber with the following obtaining of proclaimed rubber. Nizhnekamskshina and Kvart for two use 300 tonnes of reclaimed rubber per month, but if to get it on site, then it will allow to get 80 million rubles of saving,'' said Mikhail Makarov. He said that the company is ready to enter into JV with its equipment.

However, specific steps on the part of Tatarstan have not been done yet. With Kvart we have already met, they decided that the team of specialists will go, and scientists from the Kazan Institute will go to Kaluga, and then they will discuss a purchase. The tire manufacturers we have not reached yet,'' reported Director General of Tatneftekhiminvest-Holding Rafinat Yarullin.

The head of the Department of Nizhnekamsk Chemical-Technological Institute Dmitry Zemsky told about the achievements of Tatarstan scientists. According to him, the developing concept of ''green'' tires involves the use of new grades of rubbers, in particular SSBR-4, SSBR-5. Meanwhile, by the order of Minister of Industry and Trade Denis Manturov it was determined that by 2020 the share of procurement imports of SSBR-4 shall be not more than 20%. Therefore, together with the FSUE NIISK it was developed a microstructure modifier of butadiene-styrene rubber. Car tire made of this rubber will have better grip in wet and slippery conditions, as well as low rolling resistance. In 2016, it was produced a pilot batch of SSBR-2560-M27, it was received a positive opinion from the consumer.

The president positively commented on these developments and advised to cooperate more closely with the tire manufacturers.