''A2 milk is a marketing ploy, way to stand out among other manufacturers''

Two years ago, on the shelves of Russian stores there began to appear milk packaging with previously unknown inscription ''a2 milk''. Manufacturers of the new product are constantly talking about its ''correctness'', the benefits and naturalness, which supposedly regular milk does not have. Realnoe Vremya turned to the well-known Russian chemist-technologist, science journalist Sergey Belkov to understand how the milk we are accustomed to differs from a2 milk, whether it is really ''correct'' or it is a typical marketing move.

''I see in all this story exclusively dishonest marketing component''

Sergey, first I would like to ask you to explain what kind of a2 milk it is? How is it different from what we are accustomed to buy?

I must say that I am skeptical about any distinctive properties of this milk, and that it somehow has a positive effect on the human body. I see in all this story exclusively dishonest marketing component which forces people to make the unreasonable purchase decision, on the basis of unchecked scientific evidence.

In simple terms. Milk contains two types of protein: A1 and A2. It is. They are not very fundamentally but differ from each other. Regular milk contains both proteins. The so-called A2 milk, as the name implies, contains only one of them: A2, and deprived of A1. A2 milk is taken from special breeds of cows. A number of ''studies'' carried out with the direct participation of A2 milk producers show that it is much easier to digest, does not cause allergies, is better tolerated in the case of lactase deficiency and almost treats autism.

Now in the world and in Russia there is a fairly aggressive marketing campaign that promotes the consumption of such milk, more (allegedly) useful.

Speaking of the differences between A1 and A2 casein: some experts argue that when exposed to digestive enzymes on A1 beta-casein the biologically active opioid peptide beta-casomorphine-7 (BCM-7) is produced. A2 beta-casein forms the minimum amount of BCM-7. It is emphasized that BCM-7 is very harmful to the human body. Is that true? What is the harm and danger of BCM-7?

Instead of commenting, I will allow myself to direct you to absolutely remarkable article of Alexey Vodovozov, in which all these peptides are analysed in detail. In short, all statements about their harmfulness and some terrible biological activity from the point of view of science are garbage and unfounded statements. 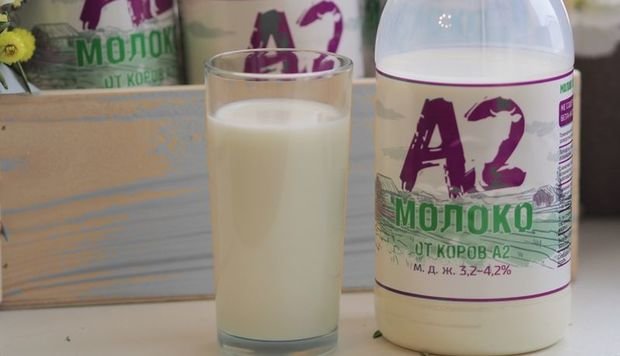 ''I am skeptical about any distinctive properties of this milk, and that it somehow has a positive effect on the human body. I see in all this story exclusively dishonest marketing component which forces people to make the unreasonable purchase decision, on the basis of unchecked scientific evidence.'' Photo: milkua.info

Now regular milk is not the ideal food product. However, we cannot call it bad. This is a normal, usual product that you can drink, or not to drink, depending on food habits or characteristics of the body. One doesn't need to worship it and one should not be intimidated. Probably, there is a certain, most likely scanty, difference between the products of digestion of A1 and A2 proteins. But the difference between regular milk and A2 milk from the point of view of the health of the end user has not yet been shown in any decent scientific work.

What is the attitude to A2 milk in the expert community?

In the scientific and food community, the attitude is quite simple: A2 milk is a marketing ploy, a way to stand out among other producers. It has no additional functional, food or biological value. In the market, there is a group of players trying to earn a certain premium margin by creating a negative image of the product of their competitors and attributing some positive properties to their product. This is a typical story for a modern competitive market.

''Someone thus proves that HIV does not exist, and someone — that A2 milk treats autism''

It is believed that the reason for the emergence of the world market of A2 milk was a book by Keith Woodford, Professor of Agribusiness at Lincoln University in New Zealand, entitled Devil in the Milk: Illness, Health and the Politics of A1 and A2 Milk. Are you familiar with this work?

This book is actively promoted today by one of the Russian companies, and its author is regularly invited to Moscow with lectures. For reasons I do not understand, it is also promoted by some workers in the sphere of Russian education and science. With your permission, I won't mention their names.

This book is written according to the classical canons of bad science. Similarly, endless articles are written about the dangers of GMOs or vaccinations, and the benefits of garlic or herbal medicine. The approach is simple. Every year the world publishes a lot of research on any topic. There is no difficulty in choosing two, three or ten of them. Somewhere to tweak the results slightly. Somewhere to over interpret the hypothesis. Somewhere to keep silent about the fact that the data has long and repeatedly refuted. Selectively and biased reporting on the ''right'' points one can always create the illusion of scientific validity in the reader. Just someone thus proves that HIV does not exist, and someone that milk A2 treats autism.

That is, summarizing all the above, does that mean that it is pointless to run to the store and turn the shelves in search of A2 milk?

I would even say that it is completely unreasonable because now a quality work that would show that A2 milk really has some distinctive properties simply does not exist. There is the only large clinical study conducted in China, which allegedly showed some advantages of A2, but it has a lot of problems. By the way, about six months ago I contacted the magazine and sent them a list of detected and unexplained oddities in the work. Just last week, I finally got a response that the problems are justified, and they want to publish criticism in the form of a letter to the editor. I do not lose hope that this completely bad and harmful work will eventually be revoked. ''This book is written according to the classical canons of bad science. Similarly, endless articles are written about the dangers of GMOs or vaccinations, and the benefits of garlic or herbal medicine.'' Photo: style.rbc.ru

What exactly inaccuracies are there?

In the tables accompanying the article there have been found figures that simply could not happen by accident. In my opinion, they are simply invented, as, most likely, the whole article. I even think that it is possible that there was no research at all. It's not an accusation, but it's my opinion.

I'll try to explain. Probability theory is not about the predictability of our world, but about chance. If you throw a coin 100 times and an eagle falls 50 times — it is more normal, although it could fall 46, 49, and 52 times. If you throw again 100 times and you get exactly 50 eagles again — it is suspicious and unlikely. If you make 6 series of shots on 100 and in each series you have exactly 50 eagles — most likely you are a crook, and without a video of your shots you simply should not be believed. It is extremely unlikely to get such a result. And that's what we see in the work: an extremely unlikely distribution of test participants by groups and ages. There are other inaccuracies and negligence in the figures, which indirectly confirm my suspicions. Also from the point of view of biology, the received data is unlikely.

Nevertheless, this work is published, and it is referred to as a science.