10 facts about the use of river resources in modern production

The problem of water resources is one of the most acute for the country's economy. The transition from old water supply systems and water treatment technologies to modern ones requires significant investments from regions and private enterprises. However, it is necessary for serious savings and improving environmental safety. We have studied the features of effective use of water resources in modern production by the example of Kazanorgsintez PJSC. About how to get rid of chlorine, improve the quality of drinking water, reduce the volume of water intake from the Volga River, and to make industrial effluents cleaner than the Volga water itself — read in the material of Realnoe Vremya.

1,091 billion rubles to reduce wastewater discharge to the Volga River

Let's start with the fact that economical and environmentally friendly use of water resources requires serious financial investments. So, in 2018 Kazanorgsintez, participating in the regional project ''Conservation and prevention of pollution of the Volga River on the territory of the Republic of Tatarstan'', developed a perspective plan of measures to improve the ecological state of the Volga River in the years 2018-2025. The company allocated 1,091 billion rubles for the project. And this is without taking into account the high costs in 2016-2017.

Replacement of outdated steel water pipelines with polymer ones

To the main production site of Kazanorgsintez PJSC, the water is taken from the Volga River, it is cleaned and piped through four pipelines. Two new water pipelines were installed in 2008, and the other two, 700 mm in diameter, have been in operation since 1962. In 2016, the company launched a large-scale five-year project to replace the main water pipelines. It was decided to replace the used steel pipes on water pipelines with polyethylene ones. Iron contained in water provokes the development of iron bacteria. They are combined into colonies and form rusty mounds on the inner surface of the pipes, then turning into corrosive holes — fistulas, through which water leaks. The water is further saturated with oxidized trivalent iron. Polyethylene pipes in this respect are much more environmentally friendly. However, during the time since the construction of water pipelines, the territory on which they go through, was built up partially with horticultural plots, roads, a lot of utilities were laid. Therefore, in the project at the intersection of roads and railways, as well as in places where it is impossible to ''pass'' openly, the sanitation method of polymer sleeve was used: the old pipe introduced a flexible composite sleeve, which then hardened.

Chlorine was replaced with sodium hypochlorite

To exclude from the technology of obtaining drinking water quality of dangerous production process associated with the use of chlorine, the production facility of low-concentrated sodium hypochlorite with electrolysis method from salt was built and commissioned in 2017. The new method of disinfection is characterized by environmental, industrial and technological safety. In addition, it has improved the quality of drinking water. 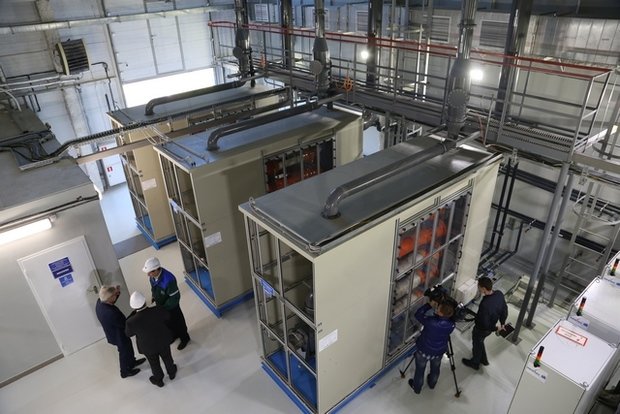 Taking into account that Kazanorgsintez PJSC is a dynamically developing enterprise seeking to increase the output of its commercial products and mastering new production technologies, as well as that Kazan CHP-3 branch of TGC -16 JSC and Salavat Kupere residential complex with a planned population of more than 40,000 inhabitants are connected to the water networks of Kazanorgsintez PJSC, to meet the full demand for drinking water quality, the construction of a new water treatment unit with a capacity of 40,000 m3/day has been started, combined with a clean water tank with a volume of 8,000 m3. The commissioning period of the new water treatment unit is the fourth quarter of 2020.

The scheme of the whole facility together with treatment plants is unique for Tatarstan. It is located on the high-rise scheme. That is, under the ground there will be a reservoir of clean water, and above it — treatment facilities. Here, a fundamentally new technological scheme of water purification will be applied, where clarifiers-recirculators are used as the first stage, rapid filters are used at the second stage, and also reagent water treatment is provided: coagulation, flocculation and disinfection with sodium hypochlorite. The scheme allows also with the least impact on the environment and minimal costs to dispose the wash waters of high capacity filters.

Cooling towers made of composite materials

Kazanorgsintez uses 40 cooling towers in the technological process for cooling water. Some of them have been working since the foundation of the plant. Major repairs of cooling towers with replacement of irrigation and water distribution systems are carried out annually. Last year, composite materials were used for the first time in the reconstruction of the cooling tower. ''While this is the first swallow, let's see how she behaves. Previously, the construction of cooling towers used metal, but it rots, rusts, respectively, the life is reduced. The used composite materials are more resistant to wet environment, convenient in the process of installation due to the ease of construction,'' said chief power engineer of Kazanorgsintez PJSC Vyacheslav Melnikov.

Used water is discharged in the Volga River. The company is working on both reducing wastewater and improving the quality of discharged water. Wastewater treatment units at Kazanorgsintez were mounted with communication for replenishment of working capital of enterprise systems with treated wastewater after the microfiltration node of PALL company. The project allowed to return industrial wastewater in the technological process that reduces the dumping of industrial and storm water sewage into the Volga River up to 12,000 cubic metres per day.

The installation of heat exchange equipment for condensate cooling at the polycarbonates plant allowed to reduce the consumption of river water and reduce the amount of waste water by 61,300 tonnes a year.

The adoption of technology to neutralize alkaline wastewater with carbon dioxide helped the enterprise to reduce the secondary pollution of the cleaned wastewater with sulphate of 53%. To reduce the negative impact on the environment, in 2016-2017 Kazanorgsintez PJSC completely updated the sludge and silt sites. The base and walls were replaced at the slurry sites, the sites were strengthened with a solid reinforced concrete base, thus preventing the seepage of contaminated sludge through the soil into the water reservoirs. Also, the open trays to closed pressure pipes have been changed. The total length of the restored section is already 6,227 meters

As a result, according to the results of already implemented measures, the water discharged into the Volga River after purification by its composition is qualitatively better than the Volga water itself.