Wild animals of Tatarstan estimated at more than 1,6bn rubles

To count the wild inhabitants of forests, to protect animals, birds and fish from poachers, to ensure the restoration of biological resources of the region — the keepers of wildlife of Tatarstan, or rather, the staff of the State Committee for Biological Resources, reported on what was done last year and shared plans for the current year. Read the details in the material of Realnoe Vremya.

Number of zakazniks and nature reserves in Tatarstan to be increased

The main activities of the State Committee for Biological Resources last year were determined by the Strategy of Socio-Economic Development of the Republic of Tatarstan until 2030 and were aimed at preserving wildlife and increasing biodiversity in the region. The total area of hunting lands of the region exceeds 6,300,000 hectares. The water space — more than 4,000 square kilometres. The hunting lands are distributed among 68 hunting providers and divided into 98 hunting sectors. Almost a quarter of the territories are publicly accessible.

A little less than 400,000 hectares, or almost 6% of the total area of the republic — the territories of 184 zakazniks, nature reserves and other protected areas of Russia (PAS). A little more than a year ago, the task of supervising these territories came under the jurisdiction of the State Committee. In the past year, a full audit of these areas was carried out. According to experts, in the next few years the territory of protected areas should be at least doubled, thus the republic will create a sufficient recreational base for permanent replenishment of the population of wild animals and animals, insects, birds, plants. This year, it is planned to introduce five new protected areas. The territories of three, with a total area of 14,44 thousand hectares, have already been determined. In 2020, five more are to appear. ''It is necessary to adopt the law 'On specially protected nature areas' in the republic,'' said Fyodor Batkov. Photo: tatarstan.ru

There are 300 Altai marals in Tatarstan

Despite the low wages of employees, active work is being carried out to protect and increase the number of tenants of the wood. For the last two years, the number of moose increased from 7,700 to 8,400. The number of roe deer increased more than twofold — from 2,200 to 4,634. The European hare became more by 40%, more common are mountain hare, grouse, gray partridge, squirrel, western capercaillie, beaver, mink. The number of muskrats, marten, wild boar, hazel grouse have stabilized. But the number of bobak marmot has declined. In February, President of Tatarstan Rustam Minnikhanov signed a decree on the introduction of temporary restrictions on harvesting these animals for the next 3 years. The previous experience, when a time limit was imposed on harvesting of black grouse, hazel grouse, partridge and hare showed the effectiveness of this measure.

The programme to return the red deer to the forests of Tatarstan is also quite effective. It started in 2013, when GBU CVITOS, Zelenodolsky district, brought the first few dozen individuals of the Altai maral. Currently, more than 300 marals live in the natural environment of the republic. Photo: Alexander Shakirov

Another species of the red deer, the sika deer, will begin its resettlement in the region from the Alekseevsky district. The hunting society Maral brought 200 individuals there last year.

''Based on the number of hunting resources, the economic assessment of the reserves of hunting animals of the republic today in monetary terms is almost 1,622 million rubles,'' said Fyodor Batkov, the chairperson of the State Committee. ''Despite a high anthropogenic load, intensive industrial development of natural resources, the republic has achieved a fairly high rate of productivity of hunting lands — 21,92 rubles/ha, which is much higher than the value approved by the ministry of natural resources (9,74 rubles/ha). Tatarstan in this matter occupies the leading position in the Volga Federal District,'' he added.

Last year, the inspectors of the State Committee removed almost 8,500 fishing nets. Their total length would be enough to stretch from Kazan to Moscow. According to the most conservative estimates, about 150 tonnes of fish were saved from illegal fishing, which is 21 million rubles of damage. More than 40 poaching fishing camps have been identified and destroyed. 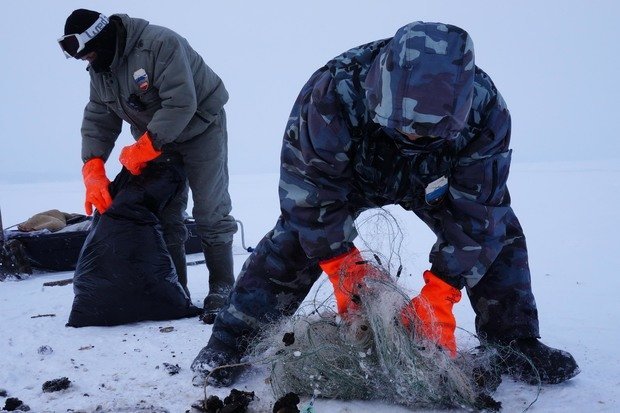 More than 600 people took part in the action ''Fish will be! Balyk — bolsyn!''. Photo: Arseny Favstritsky


The state body is actively helped by the population — honest fishermen and industrialists contribute to the detection of poachers. In addition, in the spring they participate in the creation of artificial spawning grounds, and in winter — save the fish from mass fish mortality. The action initiated by the State Committee was called ''Fish will be! Balyk — bolsyn!''. It was participated by more than 600 people, including about 200 children and veterans.