A two-point margin between Alina Zagitova and Sofia Samodurova after the European Championships' short programme promised a close fight in the free programme. However, numerous fans of the skaters didn't see it as strange as it might sound – the Olympic champion, tense and constrained, became easy prey for the new charming queen of the Old World. Famous TV commentator and permanent author of Realnoe Vremya Aleksandr Norden was glad about the birth of the new champion together with Minsk Arena.

A fall, a failed cascade and the final 11 th place after the short programme almost decided the fate of one of the Russian national team members. It became clear that even if Stanislava Konstantinova had shown a phenomenal performance in the free programme and jumped onto the podium, she won't go to the World Cup.

Obviously, there had been already told that some of the substitutes of the national team of Russia should certainly join the main squad at the Japanese World Cup. But it isn't a sheer coincidence that they have renewed and almost spilt over into pages of information agencies after Stanislava's bad luck. The figure skating world is as amazing as cruel. If you fell, you fell from grace, goodbye. Captives stopped being accepted here a long time ago.

''Athletes of such a level as Medvedeva, Tuktamysheva shouldn't miss the World Cup in Japan,'' it's coach Aleksey Mishin's words. ''The Federation announced at least one of the substitutes will to the WC in Japan in the first team.'' Konstantinova came out with a smile having forgotten the nightmare in the short programme in the same breath and shown it's early to cross her out of the number of candidates to rank high. Photo: fsrussia.ru

So Konstantinova's fall even played into someone's hands. By the way, it's Mr Mishin because Tuktamysheva is his pupil. And one shouldn't think that Medvedeva with a higher both rating and level and simply with greater talent is the number one candidate for a seat in the national team.

There is huge authority of the mentor, patriotism and love of the people for ''juicy'' things in addition to it behind Tuktamysheva who is a coquette thinking on her feet claiming the title of ''sex symbol''. While Medvedeva who severely broke up with Eteri Tutberidze and, moreover, moved to Canada has a reputation of being ''forever second'' as well as ''turncoat'' that stuck to her. The world is one and you can choose a coach you want… these ''tall stories'' aren't accepted by officials of the Figure Skating Federation of Russia.

''Why didn't anybody from the federation even ask Brian Orser's opinion when forming the squad?'' Tatiana Tarasova was indignant. ''Why did everyone turn a blind eye to the opinion of the world champion and two-time Olympic silver medallist's opinion?'' All is clear for everyone, dear Mrs Tarasova, because he isn't ours.

By the way, same Tarasova almost predicted Konstantinova's bad luck. ''Why did Stanislava have two complicated warm-ups before the kick-off and both were unsuccessful?'' the great coach asked. And she couldn't find an answer to it.

As for Samodurova's successful start at the Euro, Aleksey Mishin refused to comment on his pupil's performance and promised journalists to do detailed analysis of Sofia's performance after the free programme. The mass media remembered the maestro's words that Samodurova had very big intellectual potential. ''She is very smart!'' Mishin couldn't resist using the epithet when telling about his pupil shortly before the championships. And the main intrigue of the Friday battle was which skating would win – smart skating of Sofia or almost perfect ''machine-like'' skating of Alina. ''She is very smart!'' Mishin couldn't resist using the epithet when telling about his pupil shortly before the championships. Photo: facebook.com/isufigureskating

And she wasn't going to give up

24 figure skaters who qualified for the free programme performed in four warm-ups. Stanislava Konstantinova appeared in her shift (third) immediately after Emmi Peltonen who failed her programme.

While Konstantinova came out with a smile having forgotten the nightmare in the short programme in the same breath and shown it's early to cross her out of the number of candidates to rank high. Flips were a bit under-rotated, we saw a double Lutz instead of triple, but the arena gave a huge ovation – this Anna Karenina certainly conquered the hall. Stanislava lacked little to get her best score for the free programme (135,01). However, her supremacy over all the previous performances was undoubted – 132,96 and 189,72 in total. And over many people who skated after.

After athletic French dark-skinned Maé-Bérénice Méité remained after Stanislava with her technically complicated performance and young Bulgarian Thumbelina Alexandra Feigin, opaque hope for a bronze started to loom ahead of Konstantinova.

Ranked sixth after the first day Laurine Lecavelier whose main goal was to win Bérénice Méité and get the only quota for the World Cup from France opened the performance of the top group. Brian Joubert's pupil had the best performance of the season and went ahead of her friend and team rival by almost three points with 180,05 points in total. Viveca Lindfors made a mistake in the loop jump but didn't have faults further, except the under-rotated triple Salchow. Photo: isu.org

Nicole Rajic who was fifth chose worldwide known music to Doctor Zhivago film as accompaniment. She touched the ice with her hand in the first triple Lutz, fell in the second part of the performance and opened the gate to the podium for Konstantinova.

After the Slovak athlete who skated last in the first ten, fourth-ranked Viveca Lindfors was on the ice who chose music to Les Misérables musical. She made a mistake in the loop jump but didn't have faults further, except the under-rotated triple Salchow. Considering she was ahead of Konstantinova by almost 9 points after the short programme, we started to worry about our athlete. These anxieties were true – having fallen behind the Russian by four points in the free programme, she exceeded her in the total score – 194,4.

Then it was our 16-year-old Carmen's turn. Zagitova fell in the triple Lutz in the second minute, then showed a powerful part but again ''landed'' on both hands after the loop jump, she under-rotated a triple toe loop and was far from her real level in general. Her performance was rather similar to the only failure during the last ''golden'' season, which was at the World Championships in Milan and ended for the Olympic champion with the 5 th place. With five points less than Lindfors, she caught up with her in the total score by four points and gave a good chance to Samodurova. 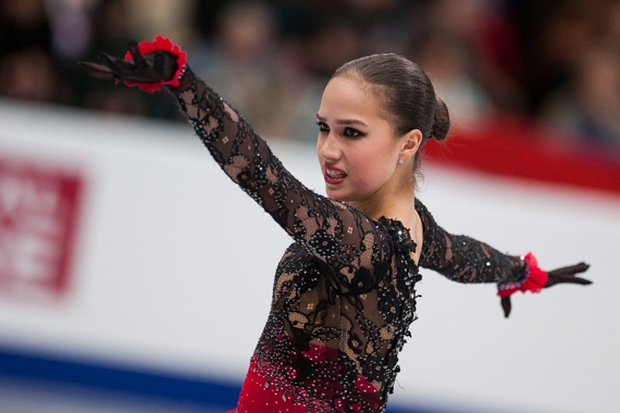 From an awkward girl Alina has turned into a beautiful young woman. But at the same time, lightness and joy of skating. Photo: fsrussia.ru

The latter began the performance quite tense. But after understanding all went according to plan, she felt free, became addicted and started to enjoy on the ice again. Jumps with accurate landings, cascades, rotations, burlesque sliding, and all this was done with a smile, shoulder shrugging, flirting with the audience… The technique and artistry came together surprisingly naturally. And it became a new European champion was in front of us. And Sofia finally allowed herself to burst into tears after the performance and a round of applause she was given. And it was tears of happiness.

''I want to thank the spectators for the support and my coaching team for the job done after the Championships of Russia and during the season. And many thanks to my parents and family who supported me and cheered for me. I had been preparing for my performance since the morning and I hope it's been perfect. I didn't think of rivals,'' Samodurova admitted after calming down a bit after the performance.

The last intrigue was who would win a bronze – Finnish Lindfors or Swiss Alexia Paganini who closed the competition. Unfortunately, Paganini wasn't a rival for Lindfors and sent her down to the 6 th place. Having jumped over seven lines, Konstantinova turned out fourth and stopped a step from the podium. Pupils of two great coaches of modernity – Eteri Tutberidze and Aleksey Mishin – have been sitting up in the European throne since 2014. Photo: fsrussia.ru

Let's draw conclusions. Pupils of two great coaches of modernity – Eteri Tutberidze and Aleksey Mishin – have been sitting up in the European throne since 2014. In Minsk, the professor easily won his rival as a coach and put a new star Sofia Samodurova to the podium. I consciously don't call charming Sofia a ''star'' – the figure skater will become it. But her relaxation, the joy of what she is doing on the ice are in so big contrast with Zagitova's tension that the latter urgently needs to reboot. Yes, from an awkward girl Alina has turned into a beautiful young woman. But at the same time, lightness and joy of skating without which it's impossible to win on the ice have gone somewhere away. And Samodurova's victory is really the coach's merit, don't be shy, Mr Mishin.