Denis Matsuyev with Friends in a new format

The sixth festival in Kazan

With friends and for friends

This year, art director of the festival Aleksandr Sladkovsky has changed its format: Matsuyev is playing a solo programme without the orchestra in the first part for the first time in the festival's history. He's performing with the orchestra in the second part. ''I'm playing the first part alone, the second – without my friends because I need to justify the name Denis Matsuyev with Friends,'' the pianist had explained before the concert began. Before coming to Kazan, Matsuyev played to a full house in Carnegie Hall and then spent 18 hours to fly to Russia. However, it didn't influence his play, and no tiredness was seen.

After a welcome speech of Yulian Makarov, the light in the hall dimmed, Matsuyev walked fast as if he was afraid to lose the state he had already accumulated in his soul and sat at the piano. For the first part, the musician chose two sonatas of Beethoven and Chopin's ballade. The hall remained one-to-one with the musician and his thoughts.

Beethoven's Sonata No. 17 by Denis Matsuyev is a passionate expression, a burst of emotions when the musician's temper sticks out a lot. Three parts of this sonata are three monologues, three changing psychological states of a character where the lyrical storm sometimes gives way to psychological digging in oneself. 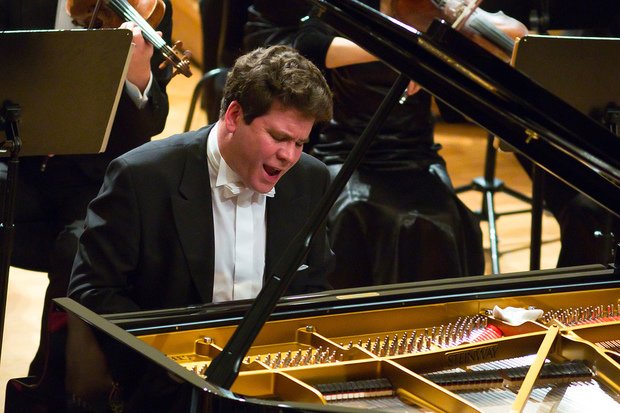 Beethoven's Sonata No. 17 by Denis Matsuyev is a passionate expression, a burst of emotions when the musician's temper sticks out a lot. Photo: Roman Khasayev

Sonata No. 17 is interpreted by Denis Matsuyev with contrasts. From idealistic and dreamy feelings to some reasonable intonation. From unreality of characters to reality. Matsuyev is a dreamer and philosopher in this Beethoven sonata.

As for Chopin's ballade, the crystal clarity and transparency here, which is characteristic of the great Polish composer, was communicated by the pianist perfectly. We heard ''silver'' Chopin, as it should be in his ballade.

A world of fjords, trolls, northern harsh nature, the kingdom of snow and flashes of fire, irrepressible popular fun and sadness – it's what the Tatarstan State Symphony Orchestra's art director and chief conductor Aleksandr Sladkovsky prepared for the festival Denis Matsuyev with Friends having chosen Edvard Grieg's music for the concert.

Grieg wrote music to Henrik Ibsen's plot about Peer Gynt where love and betrayal, loyalty and indifference, longing, despair and hope mixed. And this all happens amid stingy Norwegian nature, almost pagan celebrations and poetic popular stories and legends. This all was present in the musical compositions, which was accurately ''staged'' by Aleksandr Sladkovsky. But not only this, Sladkovsky always does so, though, who doesn't allow to be straightforward. And the music he chooses has always something unexpected, some unexpected joy. A world of fjords, trolls, northern harsh nature, the kingdom of snow and flashes of fire, irrepressible popular fun and sadness – it's what the Tatarstan State Symphony Orchestra's art director and chief conductor Aleksandr Sladkovsky prepared for the festival Denis Matsuyev with Friends having chosen Edvard Grieg's music for the concert. Photo: Roman Khasayev

As a guide, the maestro led us from picture to picture, from sad farewell with Peer's mother Åse – to a mysterious and mystical hall of the mountain king, from cold morning in the fjords with the crystal clear air – to irrepressible joy of a folk dance. To a splash of a wave and the smell of pine cones in the Bergen forest where Edvard Grieg liked to spend time in summer.

Is that all that Ibsen and Grieg wrote about? No, of course, this is why the maestro was leading us to the most important part, this is why the great dramaturg and the great composer created their Peer Gynt. To eternal Solveig whose name is translated from Norwegian as ''sun's path''.

Carefulness and tenderness – these are the two words that could describe this conducting manner of Aleksandr Sladkovsky when the orchestra he led ''told'' about eternal womanliness. It contained some longing and aspiration for an ideal: ''Perchance both winter and spring will pass, and next summer, and the entire year, but at last you will come, that I know for sure…''

Solveig's Song, the girl who became a symbol of womanly loyalty that in one Russian poet's verse ''used to coming by skis and smiled to the spring that came'', is a painful anthem of love, its loss and a new acquisition. It's a prayer and a spell at the same time. And sitting in the hall, it was impossible to hold warm tears back that treacherously were running on the cheeks. Naturally, there was an encore. Photo: vk.com/publicgsort

After the audience shouting ''Bravo'' calmed down, which took several minutes, the programme went on with Grieg's famous concert for piano and orchestra. Matsuyev was on the stage again, this time he was surrounded by the Tatarstan symphony orchestra and maestro Sladkovsky. And the soloist's virtuoso play mixed with the orchestra's virtuoso job demonstrating an explicit national theme of Edvard Grieg's music in this composition. Naturally, there was an encore. It wasn't hard to guess what would be performed. In the Hall of the Mountain King, of course. But Solveig's Song was still playing in my soul: ''at last you will come, that I know for sure…''