The Tatarstan Ministry of Finance became angry at the reproaches of colleagues from the Ministry of Economy that local entrepreneurs are ''fleeing'' for tax holidays to neighbouring regions, for the sake of which they register their businesses there. On the eve of the final discussion of the draft budget for 2019 and for 2020-2021, Finance Minister Radik Gayzatullin publicly stated that the outflow of small businesses to other regions is not confirmed by the data of the tax service, which actually disavowed the loud statement of Minister of Economy Farit Abdulganiev at recent parliamentary hearings. It is unclear whether the ''verbal'' skirmish will affect the adoption of the draft law on ''tax holidays'' in the government. But another nascent conflict of businesses due to the abolition of 50 per cent of the tax exemption on transport tax for leasing companies is unlikely to bring them success.

The drafters of the main financial document of Tatarstan presented the amended version of the draft budget for the year 2019 and for 2020-2021 for subsequent submission to the government of the Republic of Tatarstan on 10 October. As expected, the Ministry of Economy of the Republic of Tatarstan announced the forecast of socio-economic development for the next 3 years, and the Ministry of Finance of the Republic of Tatarstan — the main financial parameters of the consolidated budget for these years. Although the ''zero'' parliamentary readings of the draft budget were left behind, the hearings were rather of a technical nature, the preparation for the discussion in the first reading is behind. Nevertheless, Tatarstan Minister of Finance Radik Gayzatullin personally came to the preparatory meeting of the budget committee, who, it should be noted, only once announced the budget.

Moreover, he was backed by a team of three key deputies who participated in the development of the financial document. In turn, the co-drafter of the project, the Ministry of Economy of the Republic of Tatarstan, was completely ''unarmed''. As usual, it was presented by Deputy Minister Oleg Pelevin who, it seemed, learnt the text of the forecast of social and economic development by heart and kept within 10 minutes. After a series of his regular speeches in the State Council, the forecast remained almost unchanged, so it was difficult for him to get confused. But what caused the unexpected arrival of the chief manager of the two hundred-billion budget resources of Tatarstan became clear after the announcement of the speakers of the official reports.

The decision on tax holidays has not been made yet

Unwittingly, Roman Mugerman, a United Russia party member, summoned the minister of finance on a long frank conversation about whether to introduce a tax holiday in Tatarstan. In fact, he asked only the clarifying question: whether the shortfall in income from the introduction of tax holidays for entrepreneurs is taken into account, which it would seem was agreed at the parliamentary hearings on October 8. Like other deputies, he was sure that a generous gift from the authorities awaited small and medium-sized businesses. Although, to be precise, Minister of Economy Farid Abdulganiev only made a promise to ''press'', but not one hundred percent guarantee. ''This question was supported, and at a meeting with the president of Tatarstan we also came up with this initiative. I hope that it will be supported,'' he encouraged then. Farid Abdulganiev only made a promise to ''press'', but not one hundred percent guarantee

Finance Minister Radik Gayzatullin, in fact, immediately pointed to the incompleteness of the negotiations to overly optimistic deputies. ''The budget changes are not taken into account due to the fact that the consolidated budget is built on the basis of the adopted regulations. Considering that the discussion is under way, as reported by the minister of economy of the republic, the decision has not been made yet,'' he cooled the ardour of the parliamentarians. But he assured that the ministry of finance always supports them ''in these moments'', which, certainly, few believed. It is too unnatural for stingy ministry of finance to give benefits right and left.

Ministry of Finance of Tatarstan: we do not see an outflow of entrepreneurs

After that, the minister of finance did not stop, but again rushed into a debate with Minister of Economy Farid Abdulganiev, who reproached for business migration. Let us remind that at the parliamentary hearings on October 8 the minister of economy said that his office conducted an analysis of ''migration of small and medium-sized businesses'', which showed that our businessmen from the border areas of the republic move to neighbouring regions. ''The analysis, unfortunately, showed that we are losing part of entrepreneurs who move to neighbouring regions or register there. This is due to the fact that a number of patent prices in Tatarstan are higher, and secondly, because of the provision of tax holidays,'' he admitted and reasoned the need for the introduction of tax holidays.

In response, the minister of finance categorically stated that the outflow is not confirmed by the data of the Federal Tax Service in Tatarstan. ''In 2017, 88,000 entrepreneurs were registered here, and now, as of 1 August 2018, it is 92,480. For now, the figures do not say that there is an outflow to Mari El or somewhere else. At least, according to the tax service, we do not see this. I'm just giving you the figures. It's not my personal information, it's the tax service's. According to the simplified system, we have an increase in the number of taxpayers and fees,'' he said softly.

Then the minister compared the tax regime for SMEs under the simplified tax system in Tatarstan with other regions. According to him, several regions do not provide benefits for those who work by a simplified tax system. ''In Bashkiria and Mari El these benefits are not provided. They are absent in Samara and Saratov as well,'' he listed the ''sweet'' regions. ''As for tax benefits in other regions, we have studied their effect in 2016-2017. They are miserable!'' exclaimed the minister of finance. 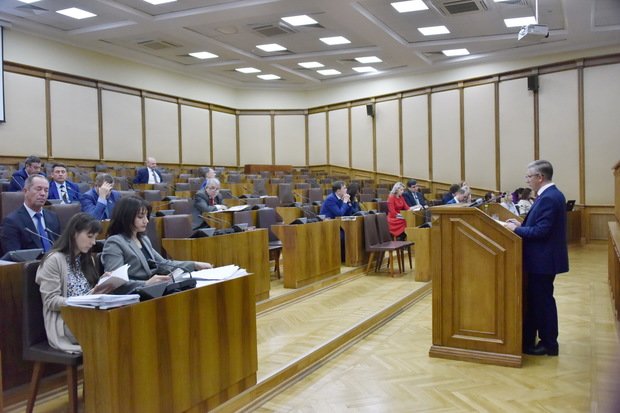 Why the ministry of finance doesn't like tax holidays?

But, according to him, Tatarstan grants benefits to SMEs not individually, but to all those who work by a simplified tax system. According to him, in 2017 they received benefits at 924 million rubles. ''This is real money, but tax holidays do not exempt from payment, but only give a delay of 2 years,'' the minister of finance of the Republic of Tatarstan said. ''The fact that our president decided to provide benefits – it is real money, they are more effective,'' he assured. For the next year, Tatarstan has laid the benefits to the business at 6,6 billion rubles, said the minister of finance.

Why does the ministry of finance not like tax holidays? As it follows from the speech, the benefits are not available for everyone, but only for start-up entrepreneurs. Of course, after two years, they will need to return the arrears, but the financiers are sure that they are likely to close the company and withdraw from tax accounting, so there will be no one to ask. Nevertheless, the minister of finance assured that ''together with the ministry of economy they will discuss this issue, and then report to the government. <...> I would not say that we are in a worse position than Bashkiria and Mari El. The figures show the opposite,'' the minister assured.

How to close off a loophole at 10-12 billion rubles

Another tax conflict among those wishing to compete for budget benefits unfolded in connection with the abolition of the 50-percent exemption on transport tax for leasing companies. The ministry of fnance decided to abolish it in exchange for Moscow zeroing the tax on movable property, which is why the Treasury loses 10-12 billion rubles. It operated since 2006 and was applied to trucks and buses of domestic production with ecological engine not lower than Euro 2, that is on all operating motor transport. The ministry of finance decided that they can try to close off budget loopholes from movable property.

Roman Mugerman asked in this regard whether the ministry of finance expect a migration of carriers because of all this to neighbouring regions due to the significant difference in the transport tax. And what revenue shortfalls are projected. Radik Gayzatullin did not get involved in a controversy again. But he said that the preliminary calculations were carried out with KAMAZ and leasing companies, so that ''there should be no outflows''. According to him, the budget may get 7,5 million rubles in addition to the cancellation. ''But let's see the calculations together,'' he suggested. Head of the Budget Committee of Tatarstan Leonid Yakunin said in a conversation with journalists that soon it would be pointless to negotiate tax benefits. According to him, the ministry of finance is preparing a methodology for the effectiveness of tax incentives for all levels of the government. ''To see what effectiveness we have. The story with movable property is a good example. When you cancel, but tou also have benefits. A period when we will cancel the benefits still awaits us. By and large, benefits are a temporary phenomenon. There is another question — after 2 years of operation they close. So what?'' According to him, the analysis of the benefits for movable property has shown that ''the money go to other needs, but the goal was good. <...> The trouble in the movable tax is one — there is no clear list of movable property. And we saw in the republic that our tax base on movable property began to increase. That is, they began to transfer real estate to movable property, paying taxes at a reduced rate of 1,1 percent. Why? Because there is no clear regulatory list. So it turns out that there is an oil and gas unit with columns and it is referred to as movable property, and it is impossible to challenge it.''

As a result, the draft law on the budget of the republic for the year 2019 and the planning period of 2020-2021 has been prepared for the first reading and will be considered at the next meeting of the State Council. Parliamentarians approved the consolidated conclusion, which summarizes all the comments and suggestions of the relevant committees to the draft budget 2019.