Rustam Minnikhanov: ''Then we will ask where our contract for Kazan Helicopters is''

After two years of negotiations, Kazan Helicopters plant can get an export contract with India for 48 helicopters worth almost $1 billion

Kazan Helicopters, a Russian helicopter manufacturing company based at Kazan, Republic of Tatarstan, which has gained fame as the leading exporter of Russian aircrafts, again 'flies' to India. It is possible that by the end of March they will sign a long-awaited contract for the supply of forty-eight Mi-17B-5 helicopters for the Indian air force with an approximate cost of $960 million. ''I am saying this carefully not to jinx it,'' director general of the holding Russian Helicopters Andrey Boginsky encouraged, who came to Kazan to open a new galvanic production at Kazan Helicopters. In turn, the guest asked Kazan Helicopters to hurry up with the modification of Kazan Ansat light helicopter for certification according to EASA standards. Read more in the article of Realnoe Vremya.

Without waiting for the expiration of 100 days after the appointment of new director general of Kazan Helicopters Yury Pustovgarov, the head of the state holding Russian Helicopters Andrey Boginsky again came to Kazan, but this time already for agreement of important strategic questions — about the production load until 2020 and the transformation of the model range of helicopters assembled at Kazan Helicopters. Although the formal reason for the hasty visit to Kazan was a joyful and pleasant event — the opening of modern electroplating production.

The new building was erected completely 'from scratch' and replaced the outdated complex built in the 1970s. The decision to upgrade was taken three years ago in the framework of the development strategy of the holding Russian Helicopters. It was invested 2 billion rubles in its reconstruction, 70% of which — own funds of the plant, and 30% were received under the federal programme of MIC's modernization. ''Despite tight deadlines, this facility was commissioned in 2,5 years from designing to launching,'' Andrey Boginsky highlighted the incredible speed of the construction of the industrial facility at the opening ceremony. So, almost 50 years later, Kazan Helicopters dismantled the environmentally harmful production, distinguished with 'acidic' discharges, and switched to the safe technology of aluminium anodizing with closed water system. According to the authors of the project, this metal anodizing technology will increase the corrosion resistance of the metal, which is especially important for export combat vehicles. 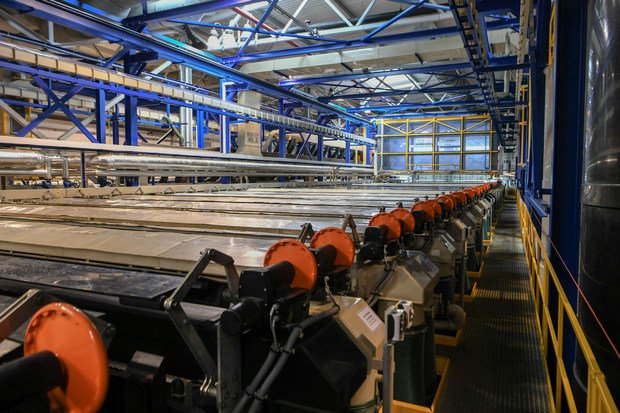 For what? The president expressed no doubt that the orders are needed to be 'won', and the modernization can be a major trump card of Kazan Helicopters in holding a lead. 'As long as we have orders, I, as a board member of Russian Helicopters, will continue to defend your interests,'' he promised the factory workers.

Kazan Helicopters is ready to fly beyond three seas

Interestingly, just one hour later he had to prove he kept his word. Two years ago, Kazan Helicopters completed the implementation of the largest contract for the supply of 151 military transport helicopters Mi-17B-5 for India, remaining short of funds in anticipation of the next Indian order. India is one of the key customers of the plant and the largest operator of Russian helicopters in Southeast Asia. Today this country exploits more than 400 Kazan helicopters. For already almost two years Kazan Helicopters has been waiting for signing another contract with the Indian air force for the supply of forty-eight Mi-17B-5 helicopters. During a meeting with the employees, Andrey Boginsky was asked a point-blank question — when?

''The theme is really 'overripe','' the head of Russian Helicopters agreed that the negotiations are being delayed, noting that the signatory of the contract on the part of the Russian Federation is Rosoboronexport. However, this year there are real chances to finally sign it. According to him, now the delegation of Rosoboronexport is being in India, and a visit of the Indian defence minister to Russia is scheduled for early April. ''We expect the signing will take place during this period,'' he said. At the meeting with the employees, Andrey Boginsky was asked a point-blank question — when will another contract with the Indian air force be signed?

According to him, the technical appearance of the machine and the price parametres of the transaction have been agreed with the Indian customer. ''According to the information we possess, technical and price issues are at high degree of readiness, they have been discussed with the potential customer. We expect that the event will take place by the end of March,'' he said.

One of the reasons for the delay in negotiations was the urgent need to replace the Ukrainian engines, which were used in Kazan helicopters, with domestic ones. ''The technical proposals of the customer have been taken into account, there were issues with import substitution. We demonstrated what we had achieved, there were issues related to the replacement of components from Ukraine. We have performed this work together with the cooperation. Therefore, I have reasons to believe that we will hear news about signing the contract not later than the first quarter. But I am saying this carefully not to jinx,'' Boginsky said.

All this time, Rustam Minnikhanov was recording the speech of the Moscow guest on his iPad, then jokingly said: ''I posted these words on Instagram'', so we will ask you where is our contract?'' unexpectedly for everyone the president promised to the audience's laughter. ''We hope for it very much,'' Boginsky said, not expecting such development of events. Indeed, this video appeared on the page of the Tatarstan president.

On the other hand, the head of Russian Helicopters made it clear that he expected from Kazan Helicopters an accelerated modification of the light helicopter Kazan Ansat to send for the international certification of civilian aviation safety EASA. ''If you look at the dynamics of sales, last year we produced seven Ansat helicopters. This year we have the plan for 45 helicopters, and we hope that the volume of sales will increase. But we need a foreign certification of civilian helicopter, which will allow us to enter the markets of other countries — China, Turkey and Latin America. Our task is to get a certificate,'' he said, stressing on the last word.