Traces of federalism: economy in Russia gives way to geopolitics

The gap between rich and poor regions is increasing, while Crimea is sunk in money

Despite several positive tendencies that emerged in the economy in 2017, a fall in real income continued in most of Russia, and polarisation of regions aggravated. It's becoming more and more difficult for poor regions with a big deficit of budgets to serve debts, while the centre preferred geopolitics to the economy. It is said in the research of RANEPA and the Gaidar Institute that Realnoe Vremya studied.

Preliminary conclusions to 2017 enable to say that favourable changes emerge in the economic state of Russian regions. Some positive trends have already come to the surface: incomes of regional budgets are growing faster than expenditures, the majority of the regions have positive production dynamics, many regions have increased investments.

However, this good mood is mixed with several negative moments. Regional inequality is rising, the margin of Moscow from the other part of the country is becoming more obvious, and economic priorities are substituted by geopolitics. Natalia Zubarevich writes about it in the regional section of Monitoring Russia's Economic Outlook, which was prepared by RANEPA and the Gaidar Institute. 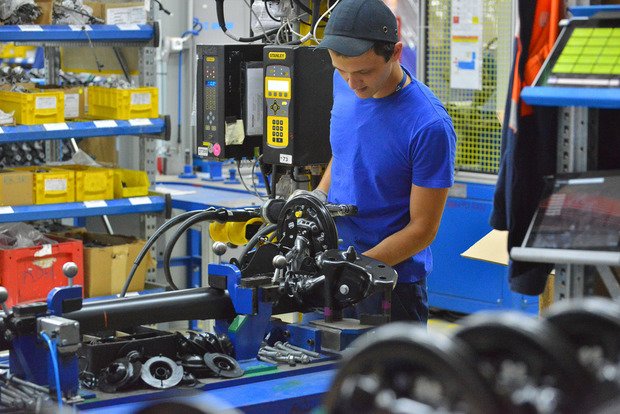 As a rule, regions oriented to processing sectors with greater contribution of the Military and Industrial Complex and car manufacturing. Photo: Maksim Platonov

A growth in industrial production was seen in most part of the country, and there remained 15 regions that had a fall. As a rule, regions oriented to processing sectors with a greater contribution of the Military and Industrial Complex and car manufacturing: Arkhangelsk Oblast (18% more) as well as Yaroslavl, Kaluga and Moscow Oblasts (13-15%).

Gas producing Astrakhan Oblast added 32%, Yamalo-Nenets Autonomous Okrug did 10%. In the Far Eastern Federal Okrug, (FFO) significant production dynamics was in Primorsk and Khabarovsk Krais – 19% and 12% respectively. However, the two most developed industrial regions of the FFO, Yakutia and Sakhalin Oblast, were close to stagnation, it's said in the research: industrial production increased there by just 1-2%.

Buryatia and Chukotka Autonomous Okrug were the most troubled regions in terms of production (a 14% and 7% fall).

In general, industrial production in the country in 2017 grew by 1%, became slower in comparison with 2016 and didn't justify positive forecasts of the Ministry of Economic Development, which expected a twice bigger growth. The dynamics reached 1,5% as early as last year's August, but the paces started to decrease in September, and growth stopped in October already. Positive dynamics of investments was seen in a half of the regions, Moscow and two major oil and gas regions made the main contribution to it. Photo: pravdaurfo.ru

''During economic stagnation and high uncertainty, business invests in regions with obvious competitive advantages – with agglomeration and feedstock,'' Zubarevich writes. Last year, positive dynamics of investments were seen in a half of the regions, the growth was 4,2% in the country for 9 months. However, Moscow and two major oil and gas regions made the main contribution to it – Khanty-Mansi and Yamalo-Nenets Autonomous Okrugs.

11,5% of the total investment volume subsided in the capital, and almost 15% did in Khanty-Mansi and Yamalo-Nenets Autonomous Okrugs. Investments grew fast in Yakutia whose economy is also dependant on commodity rent. ''A territorial structure of investments strengthens the commodity character of the Russian economy and favourable situation of the capital whose investments from the super-rich budget mainly go to develop transport infrastructure and improve the urban environment,'' Zubarevich notes.

However, investments grew as fast as possible in ''geopolitically prioritised regions'', says the report. We're speaking about Crimea and Sevastopol: investments in the republic increased 4,2 times at once and 2,4 times in its capital after three quarters. Investments form the budget whose share exceeded 80% was the driver: ''Business doesn't go there''.

What's more, Crimea was different due to the biggest growth real income of the population – by 14% in January-October. Zubarevich notes that cash wages increase mainly in underdeveloped and heavily subsidised regions. It means the place where the share of employees in the public sector is high (an outrunning growth of salaries in accordance with the president's May decrees is taking place there) and there are unofficially employed people (their incomes are calculated with overestimation and can be too high). Budget expenditures on social protection and benefits in these regions are also optimised slower.

In general, the situation with a fall in incomes hasn't disappeared, though it stopped being widespread. After 9 months, a growth of incomes was found in 16 regions, while a fall continued in the majority. For instance, incomes reduced by 2,7% in Yakutia, in Novosibirsk Oblast (in January-November) – by 3,7%, in Tatarstan (in January-October) – by 3,9%. In Russia, the fall of real disposable income of the population totalled 1,4% for 11 months. In Russia, the fall of real disposable income of the population totalled 1,4% for 11 months. Photo: Maksim Platonov

Everyone has their own problems

Increased fees in several taxes from business and the population reflected in consolidated budgets of regions well whose incomes grew by 8,8% in comparison with 2016. Payments of income and property taxes, lump-sum tax and income tax on natural persons helped it.

The highest growth of budget income among the regions was in Nenets Okrug (by 60%) and again in Crimea (by 52%). The effect of a low base took place in the first case – in 2016, the income of the budget of Nenets AO suddenly reduced. In case of Crimea, incomes rose mainly due to federal transfers that increased 1,5 times. Bigger payments of income tax also affected.

Kaliningrad Oblast (42%), Yamalo-Nenets Autonomous Okrug, Astrakhan, Kemerovo Oblasts (24% each) and Belgorod Oblast (19%) were also among the leaders. The centre that increased transfers by 81% to compensate losses of residents of the special economic zone as a result of reconsideration of benefits helped Kaliningrad Oblast.

In monetary terms, Moscow got higher payment: its budget increased to 240 billion rubles. At the end of the year, the capital's income is to surpass 2 trillion rubles; by Zubarevich's calculations, it is one in five rubles of the total income of all regional budgets.

A reduction of incomes was detected only in 13 regions. The most serious one is in Sakhalin Oblast (−24%), Ingushetia (−18%), Tomsk Oblast and Khanty-Mansi Okrug (−7-8%). In each case, the decrease in incomes has different reasons: ''Every troubled region has its own problems,'' the author notes.

Poverty for the poor

There have been more regions with a budget deficit in comparison with the last year. By early November, 22 regions had a negative balance, there were 11 regions more one year earlier. The biggest deficit is in Mordovia, Sevastopol, Kabardino-Balkaria and Jewish Autonomous Oblast. The problem of regional and municipal debt whose volume reduced by 8% from January to early November became less topical. ''However, the debt dynamics is becoming popular – regions with fewer debts are reducing it, while those with the highest are augmenting,'' says the research.

Mordovia, Khakassia, Karelia, Kabardino-Balkaria, Udmurtia, Kostroma and Smolensk Oblasts remain on the list of troubled regions. In Mordovia, the huge debt is complemented with the biggest budget deficit, the problem of debt repayment is worsening.

It should be reminded that two of the troubled regions – Khakassia and Kostroma Oblasts – are going to switch to the Treasury's assistance. In fact, an external financial management will be introduced there, money will be spent under the full control of the Federal Treasury. The Russian Ministry of Finance made such a decision, it's the first similar case in the new history of Russia.

Mordovia was mentioned among the regions with an opaque budget. In December 2017, Minister of Finance Anton Siluanov urged the administration of Mordovia to spend the budget more carefully not to touch the bottom. According to Siluanov, the region hid its debts from the centre.