''You didn’t like what he'd said at Bundestag, but why do you create a ghetto for him?''

On 19 November, schoolchildren from Novy Urengoy gave a speech at Bundestag during the Mourning Day in Germany. Pupil of the Gymnasium No. 1 in Novy Urengoy Nikolay Desyatnichenko was among the speakers. He stated in his report he studied the history of German soldiers who participated in the Great Patriotic War and visited German graves near Kopeisk: ''It made me very sad because I saw tombs of people who died innocently, many people among them wanted to live in peace and didn't want to go to war.'' He was severely harassed for this phrase – angry comments don't stop in social networks, while activists write complaints to the Prosecutor General's Office about ''rehabilitation of Nazism''. Russian journalist, ex-aide to the editor-in-chief of Echo of Moscow Lesya Ryabtseva talks about whether such attacks on the schoolboy are really justified and what exactly he tried to say to us.

''But why do you create a ghetto for the schoolboy from Novy Urengoy?''

I stopped reading the news a long time ago and usually know what's going on around the world in the Facebook newsfeed. I knew about this story in the same way. And, to be honest, I did not understand first why all people started to discuss Novy Urengoy all of a sudden that isn't seen in the news so often. By the way, this phenomenon always surpsised me: I was discussed when ''I was famous'', not really important problems. The same thing is happening here – for some reason, people started to discuss the boy from Novy Urengoy without paying attention to the number of problems that our society is facing now.

As for his speech, first of all, I think everybody has the right to have an opinion. The boy didn't breach the law, he didn't kindle, he didn't incite anything. He expressed his opinion and explained it (it's not up to us to decide whether he did it correctly or not) with the knowledge he managed to find. In his speech, he quite clearly described how he analysed the information on the topic, went to museums, reached out to different associations, etc.

I mainly feel pity for this boy because of the attacks he has faced now. In my opinion, he did not say anything terrible. On the contrary, I see how the older generation is satisfied in our country with authorities, how it continues living with the old victory, old war and old offence. The war already ended, Germany pays endless compensations, and it can't go on for ever. The boy expressed a thought that should have been told a long time ago – the Germans also were people. In this respect, I'm on his side. I'm sincerely surprised and feel sad because of the people who have the contrary opinion. Fine, you didn't like what he'd said, but why do you create a ghetto for him? Why does his mum distance herself from him and state she feels shame for what her son said? The school protects him. However, others continue saying that the guy is crazy, he isn't correct, he is blamed and severely criticised. Why do people attack the kid so?

''What does this school have to do here if our education system is so?''

A similar story happened to me, not on such a scale, but it's very funny. A worker of the Jewish Museum and Tolerance Centre in Moscow wished I had burnt in hell. It was very tolerant. I was in shock due to this situation and double standards. It turns out that the attitude to the Germans and the boy can be so but towards us – no. In my opinion, it is very illogical. 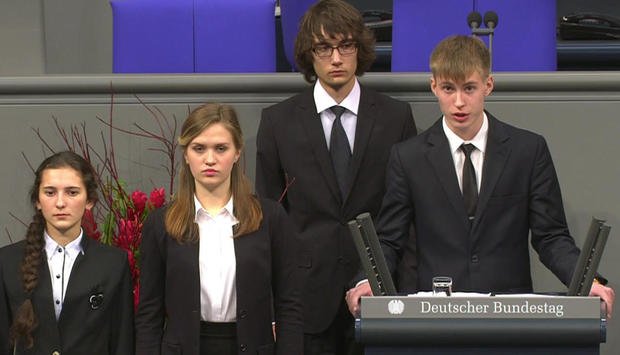 The boy expressed a thought that should have told a long time ago – the Germans also were people. In this respect, I'm on his side

One can't live with double standards and still live with an old grievance. Yes, there was an awful war, awful losses, awful things happened, and nobody denies it. But we all know that there were completely different stories when the Russians helped prisoners because they perfectly understood they, first of all, were people. In addition, when people take the oath and when they are sent to war (especially a war of such a scale), their opinion isn't asked – people weren't asked whether they wanted to do it all. The war started at the top. And the same boy's ancestors weren't asked whether they wanted to fight.

Many people already rushed to accuse the boy's family and school of all sins. But I think we should look better. What does this school have to do here if our education system is so? What does the school have to do here if the country purposefully changes history, distorts facts, substitutes details? Many historical documents are unavailable even now. What is the sense in accusing the school, family and boy if we still have serious systematic gaps and huge blind spots in the big picture of historical events? How can we judge somebody without seeing the big picture?