IT overview: Pavel Durov’s struggle with the FSB, the issue of CryptoRuble and conversations with Alisa

Three major technology companies — Google, Amazon and Microsoft — have boasted a sharp increase in profits. A robot, which threatened to destroy humanity, obtained the citizenship of Saudi Arabia. Vladimir Putin finally announced his position on the cryptocurrency and gave the go-ahead to issue the CryptoRuble in Russia. A lot of hype in October was around the messenger Telegram — the FSB fined the company of Pavel Durov at 800,000 rubles for failure to provide keys to decode the correspondence of the users; the former colleague of Durov brothers from Vkontakte and Telegram drew a fat line under the proceedings at 100 million rubles. Read more about these and many other events in the field of IT and telecom in the review of Realnoe Vremya.

Three major technology companies have published financial results for the third quarter of this year. The figures reported by Alphabet (owned by Google), Amazon and Microsoft reveal a sharp increase in profits of these giants. Thus, Alphabet net profit grew in this period by 33% to 6.73 billion USD, the revenue increased by 24% to 27.7 billion. Amazon revenue showed an increase by 34%, amounting to 43.7 billion dollars, net profit totalled 256 million USD (by 1.5% more than last year). The increase in net income of Microsoft made up 16% — to 6.6 billion USD, while revenue increased by 12% to 24.5 billion USD.

This summer, the largest US technology companies made investors worry. The big five tech giants — Facebook, Amazon, Apple, Microsoft and Google — suddenly fell following trading results by almost 100 billion USD. Realnoe Vremya expert then gave a detailed answer to the question of whether a new 'technological bubble', akin to the 'dotcom bubble', bursting in the 2000s, was expected. Pavel Durov stated that the messenger would appeal the court decision. Photo: theins.ru

Pavel Durov in litigation with the FSB

Hype around the messenger Telegram of Pavel Durov has not abated. On 16 October, the magistrates' court of the Meshchansky district of Moscow fined the messenger Telegram 800,000 rubles for refusing to provide the FSB the keys to decode the correspondence of the users. In July, the FSB demanded the messenger the information for decoding six numbers. The demand was met with silence from Telegram, therefore at the end of September it was initiated a case 'on dereliction of duty to provide the law enforcement authorities information about the facts of reception, transmission, delivery and processing of messages'.

Pavel Durov stated that the messenger would appeal the court decision. The human rights group Agora of Pavel Chikov take on the case on a grant basis. In his telegram channel Chikov posted that on 26 October Telegram filed a complaint against the court decision on administrative offence and the penalty of 800,000 rubles. Recently, the confrontation has been joined by Oleg Kashin, a journalist, and Alexander Plyuschev, a radio host at Echo of Moscow. They have filed lawsuits to the FSB, arguing the demand to Telegram to present the keys to decode the correspondence of the users.

The hero of the scandal, claiming the title of chief corporate conflict in IT industry, Anton Rosenberg, entered into a settlement agreement with Telegraph PLC (in his words, this company is a Russian legal entity of Telegram). Earlier, he accused Pavel Durov of illegal dismissal and initiating a lawsuit at 100 million rubles and his older brother Nikolai Durov — of courting his wife. A settlement agreement was offered by representatives of Telegraph. Under the agreement, Rosenberg would receive 1.5 million rubles and the entry in the work record book about dismissal at his own will. In turn, he should renounce claims to Telegraph.

This month, the messenger of Pavel Durov has given us another newsworthy event: in the Russian regions there allegedly will be launched a network of hundreds of anonymous political Telegram-channels to form the agenda before the presidential election. It is reported that journalists working in regional media and press services will be responsible for creating and maintaining Telegram channels. A new virus infects a computer, encrypting the files, and it is impossible to get access to them. Photo: epa.eu

The new virus BadRabbit raged in October: it all started on 24 October when the websites of Interfax and the St. Petersburg newspaper Fontanka collapsed. Later it became known about attacks by hackers on the Ministry of Infrastructure of Ukraine, Kiev metro and the airport in Odessa.

Group-IB experts, engaged in prevention and investigation of cybercrimes, revealed that behind the BadRabbit and NotPetya attacks there stand one and the same group of hackers. A new virus infects a computer, encrypting the files, and it is impossible to get access to them. To receive the password to decrypt the data, hackers demand to enter the personal installation code — a long code from the messages displayed on the computer screen. Then there appears an address of bitcoin wallet on which you are demanded to transfer money (ransomware demands a ransom of 0.05 bitcoin for each computer). In addition to the media, the virus tried to attack the Russian banks from the top 20, but failed. The next day, Group-IB announced the completion of the distribution of the main wave of the virus BadRabbit.

Tatarstan will become a platform for blockchain projects

It is reported that projects are being developed in the fields of healthcare, utilities sector, insurance, financial technology, logistics, construction and infrastructure projects. The regions-pioneers will be Tatarstan, Buryatia, Bashkortostan, Crimea, Karelia, Mari El Republic and Krasnodar Krai. First among the regions, according to the source, will be Novgorod Oblast, Omsk Oblast, Rostov Oblast, Novosibirsk Oblast, Samara Oblast, Tver Oblast and Tyumen Oblast, as well as Saint Petersburg. In early October, Ukraine transferred the first state register into blockchain — the State Land Cadastre. 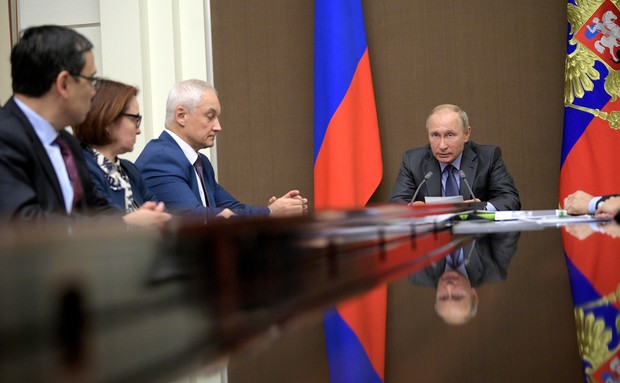 The president stated that he ''knows the position of the Central Bank'', which has quite negative attitude to the admission of cryptocurrency on the Russian market, and also listed the potential risks from their use. Photo: kremlin.ru

Putin's attitude to the cryptocurrency and the issue of the CryptoRuble

Vladimir Putin for the first time voiced his position regarding the cryptocurrency. The President said that he ''knows the position of the Central Bank'', which has quite negative attitude to the admission of cryptocurrency on the Russian market, and also listed the potential risks from their use: possibility of money laundering, tax evasion, terrorism financing and proliferation of fraudulent schemes. Meanwhile, Putin added, ''Drawing on international experience, we need to build a regulatory environment that would allow to systematize the relations in this field <...>. At the same time, it is important not to make unnecessary additional barriers.''

Along with this, Minister of Communications Nikolai Nikiforov told the press about the president's decision to start production of a Russian cryptocurrency — the CryptoRuble. The minister explained that the establishment of CryproRuble would not equal to legalization of bitcoin and other cryptocurrencies.

Russia gets acquainted with Alisa

On 10 October, Yandex announced the official launch of the voice assistant Alisa, which operates on the basis of a neural network, trained on an array of texts. A month earlier, during the visit to the headquarters of the IT company, President of Russia Vladimir Putin had a conversation with her (though the conversation was not really successful).

''Are people being kind to you here?'' the president asked the voice assistant. ''Ok, I will take it into account,'' Alisa replied.

Yandex informed that Alisa is designed to solve everyday tasks, including information search on the Internet, tips about place for dinner or weather updates for tomorrow. The users found the way of communicating of the voice assistant funny and shared the screenshots of conversations with Alisa in social networks.

Robot gets a passport, Tatarstan develops a cyborg cockroach

Sophia, a robot, who last year wanted to destroy humanity, obtained the citizenship of Saudi Arabia. It was announced at the conference Future Investment Initiative, where she gave a speech. Sophia noted that she became the world's first robot that received a passport of a country. In her speech, Sophia said that she would like artificial intelligence helped people. As for the scary story of the destruction of the mankind, in 2016 during a presentation the robot was asked whether she was going to destroy the humankind. Sophia replied in the affirmative. After a year, a journalist asked the same question, but the answer changed, ''No, if you're kind to me.''

Interesting news from the adjacent field came from the technopark Kvantorium, Almetyevsk, Russia. Specialists attached to the body of a Madagascar cockroach an electronic system that allows to control the insect by using a remote control. The cyborg cockroach can become an assistant in exploration of oil reservoirs and in locating people in case of earthquakes. We would like to note that the insect was not injured.

The scandalous case of the press secretary of Roskomnadzor

In mid-October it became known that the press secretary of the unloved by many users Roskomnadzor Vadim Ampelonsky, head of the office of Roskomnadzor Alexander Veselchakov and the head of the legal department of the agency Boris Edidin became involved in a case of fraud.

A source of Business FM close to the investigation informed that Ampelonsky and two officials of Roskomnadzor were accused of paying illegal surcharges to the salary. The Chertanovo district court of Moscow put Ampelonsky under house arrest until 7 November. The head of Roscomnadzor Alexander Zharov declined to comment to journalists on the work of his subordinates. Deputy head of Roskomnadzor Oleg Ivanov also did not give any comments.