How Tatarstan petrochemistry takes a pause due to major overhauls

During 9 months this year, enterprises of the gas and petrochemical complex of Tatarstan increased their revenue by 14%, to 787bn rubles. But some companies reduced production volumes due to major overhaul. It was known at the next meeting of the board of directors of Tatneftekhiminvest-holding. The Tatarstan president charged them with ''gaining volumes in the 4 th quarter''. At the meeting, Rustam Minnikhanov also gave an instruction to new rector of the Kazan National Research Technological University Sergey Yushko to create a preparation programme of engineers for the republic's enterprises.

Main growth – due to oil and oil product price rise

Director General of Tatneftekhiminvest-holding Rafinat Yarullin told that oil production grew by 2,3%, chemicals – by 4,3%, rubber products – by 13,2% in the republic from January to September 2017. Meanwhile, production of plastic goods reduced by 1% and oil products – by 8%. Scheduled major overhauls in the enterprises are the reason for such a reduction. Petrochemicals production indexes turned out to be lower than in the country, in general.

Core enterprises of the Tatarstan petrochemical complex increased their production volumes by 2,3% from January to September. The revenue totalled 787bn rubles with a 14% growth, and 44bn rubles were sent to the consolidated budget of the republic, which is 14% more than in the analogous period in 2016. Enterprises of the fuel sector provided the main growth of financial indicators due to oil and oil product price rise.

Tatneft increased its revenue by 19%, expenditures to the consolidated budget of Tatarstan grew by 23%. The company continued augmenting oil production volumes: by 2,6% in January-September, to 21,4m tonnes. A shift to production of light oil products at TANECO oil refinery favoured the growth of incomes. The reduction of oil refining volumes of the complex is linked with a major overhaul conducted in the 2 nd quarter.

Production at TAIF-NK reduced by 3% since the beginning of the year due to undersupply of gas condensate and lack of capacities in desulphurisation for motor fuel production. But the company managed to increase jet fuel production more than 3,5 times due to a higher demand. In the end, TAIF-NK increased its revenue by 20%, mainly by selling diesel fuel, straight-run benzene. Director General of Tatneftekhiminvest-holding Rafinat Yarullin told that oil production grew by 2,3%, chemicals – by 4,3%, rubber products – by 13,2% in the republic from January to September 2017

The revenue of core enterprises rose by 1%, while payments to all budget levels decreased by 17%. A reduction of prices for plastics, nitrogen fertilisers, detergents is among the main causes. The stoppage of construction and installation work in the new factory of synthetic detergents also affected the revenue of Nefis Cosmetics.

The production index at Kazanorgsintez amounted to 102,9%. 608,000 tonnes of polymers were manufactured, it is a 3,4% growth. Ethylene supply restrictions led to a reduction of ultrathene production. Polycarbonate production decreased because of the major overhaul, which was not conducted last year.

The Kazan Synthetic Rubber Factory is in the most difficult situation. Problems of Spurt Bank affected its state. The company's revenue fell by 69% in 9 months. ''It was decided in early October to include the factory to the list of strategic enterprises of Russia,'' Rafinat Yarullin said. ''We hope to work in this direction further on.''

''Is there any concern in our enterprises that they won't reach the scheduled plans at the end of the year?'' the Tatarstan president asked the reporter.

''Indicators in all enterprises are not bad. If goudron starts to be refined at TAIF-NK in early December, the situation will improve. Start-up and commissioning are held full steam there,'' the Tatneftekhiminvest-holding director general answered.

''What about the others? Are the numbers explained by major overhaul?''

''Yes, it is explained by major overhaul.''

''Mr Shigabutdinov, pay attention, we need to augment volumes in the 4 th quarter, it is very important,'' Rustam Minnikhanov gave an instruction to Ruslan Shigabutdinov.

The republic's head also charged Tatneftekhiminvest-holding together with the Tatarstan Ministry of Industry and Ministry of Economy with looking how the enterprises of the petrochemical complex end the year, hold balance commissions if needed.

''Not only volumes but also economic indicators are important for us, they need to comply with the parameters that were set,'' the Tatarstan president set the task. Rafinat Yarullin also mentioned one of his favourite topics – lack of qualified staff on the threshold of the 4 th Industrial Revolution. Initially, he told about the tiny participation of Russian business in the financing of research and development. Today the specific weight of enterprises in such costs in Russia account for just 26,5%, while this indicator reaches 75% in China and Korea. The head of Tatneftekhiminvest-holding told it was told at the session of the Communist Party of China, which ended recently, that they planned to create from 50 to 100 R&D with world influence by 2020 that were to provide a new rise of the economy.

''And the Russian economy has lost many scientists in the last 25 years due to a drain abroad. Many qualified people just left their profession. The quality of preparation in the educational system has worsened,'' the ideologist of petrochemistry development in Tatarstan ran sad parallel.

In his opinion, the problem of the rise in workers' average age and outflow of specialists under 30 years is becoming a more dangerous problem. ''Russia and the world have a deficit of personnel. We need to activate the policy to attract the young, solve problems to keep them. In France, the country provides financial support to small and medium enterprises that hire employers under 26 years during 3 years. While hiring young workers in Italy, Spain, South Korea, companies are given tax benefits and salary subsidies. We need to create analogous measures for industrial enterprises of the Republic of Tatarstan,'' Rafinat Yarullin continued showering with examples like 'we' and 'they'.

Preparation programmes of Russian engineers fall behind technology development. There are no standards to teach students 3D modelling, we need to solve this problem at Tatarstan universities, the Tatneftekhiminvest-holding director general continued enumerating the sore points of regional education. From his point of view, we need to completely create a programme to prepare engineers in accordance with modern possibilities of industrial design. At the same time, we need to increase the quality of schoolchildren's preparation. According to results of one international research, Russia ranks 32 nd in the rating of schoolchildren's literacy in natural science, while Singapore is first. Japan, China, Estonia, Finland are also ahead of us. In addition, the share of pupils with a high level of knowledge reduced by 1,5%. The emotional speech was backed by Rustam Minnikhanov.

''You noted the quality of specialists,'' he addressed Rafinat Yarullin. ''I would ask Yushko with Yarullin and enterprises to create a programme. Miracles don't exist, nobody will send us anybody. We need to organise all work at the Kazan National Research Technological University. A high engineering and technical level is a recipe for our future success, especially if we consider the new tasks we set for TAIF Group of Companies. A big job is done at Tatneft petrochemical complex. We need to work in detail starting from preparation of specialists at school. It is very important to intensify the job in this area in Nizhnekamsk. There is already a good production base there. We need to make a powerful educational centre in Nizhnekamsk that will comply with all world standards.'' 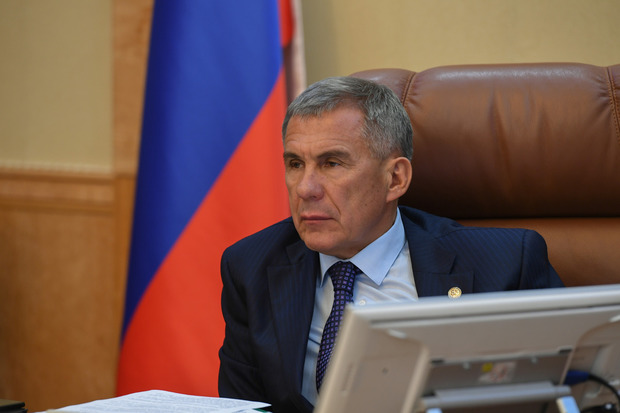 Not only an educational centre but also a new factory of Czech FANS company is to appear in Nizhnekamsk. The design project of a factory manufacturing frames and auxiliary elements of cooling towers to create and implement innovative water rotation systems was approved at the meeting of the Tatarstan Investment Council in early October. FANS-Vostok CJSC is going to fulfil the project in the Nizhnekamsk industrial park.

FANS JSC is a supplier of investment complexes, services and products for power engineering and industry. It orients to turnkey supplies and modernisation of power plants and industrial facilities. The company has dealt with industrial cooling technologies since it was founded: design, production and modernisation of cooling towers and circulation circuits. Apart from its activity in industrial cooling, it constantly expands the portfolio of equipment for power plants and industry. The project is expected to be fulfilled in three stages, and the total volume of investments is estimated at 2bn rubles. About 200 working places will be created in the factory. The company's representative says that the price of one cooling tower of Nizhnekamskneftekhim can reduce from 250 to 150 million rubles.

The company has already had meetings with potential clients – Nizhnekamskneftekhim and Kazanorgsintez. Tatenergo Director General Rauzil Khaziev said now they considered the company would participate in the modernisation of the Zainsk Hydroelectric Power Plant.

Rustam Minnikhanov advised heads of the enterprise to pay attention to these advanced energy-saving technologies and look where they could be used.