The main New Year tree of the Kirovsky and Moskovsky districts of the city of Kazan opened in the Pine Grove Park on December 24. By tradition, it is set by Kazanorgsintez PJSC. The company prepares for the event in advance — the installation of the fir tree begins a month before the holiday, it is trimmed with dozens of toys and garlands. Also, near the Chemists' Recreation Centre, a winter town has started working — this year it has been improved even more. The district administration has prepared a large programme with dances, fairy-tale characters and shows for the guests of the event. Ilsur Metshin, the mayor of Kazan, also appreciated how the site looks — he walked around the park and examined its attractions.

The lights on the fluffy spruce don't light up without the traditional Russian summoning. . Dozens of citizens came to see how the main New Year tree of the Kirovsky and Moskovsky districts of Kazan sparkles and shimmers. Sirina Burganova and her children came from the neighbouring district for this purpose — to look at the elegant New Year tree and the festively decorated playground.

“I live in the Aviastroitelny district, but I am ready to come here because everything is very bright and beautiful. We are walking and admire the New Year tree — such places cheer up, set the mood. Children love to go to New Year towns, every time they ask when we will go next time," says Sirina Burganova.

But before the site lights up, a lot of work needs to be done. Kazanorgsintez does this every year. This year, about sixty specialists worked on the territory of the Pine Grove Park: they installed a 20-metre fir tree, decorated it, assembled a stage, created a skating rink, maze, photo zone and arches. During the installation of the frame of the New Year tree, frosts came of 18 degrees below zero, and in these conditions, it was necessary to work at a height, replacing each other every 15 minutes. It took more than a month to create the site, and 3 weeks to build it.

“Kazanorgsintez is not only budget-forming but also socially-oriented enterprise. Every year we install such beautiful New Year tree for the residents of our city, and this year we even changed the concept a little — we filled the ice rink around the tree. We also restored the ice maze, created a new entrance space and a beautiful stage, so that during the New Year holidays, artists would delight our residents. In particular, there is a New Year's photo zone where you can take a picture against the background of the New Year tree as a souvenir," said Rafael Safarov, chief engineer at Kazanorgsintez PJSC.

Holiday with music and dancing

To make the opening of the site also memorable for a long time, the administration of the Kirovsky and Moskovsky districts have thought out the programme in advance. On the new stage for the first time there have been artists — kids from the cultural centre of the Moskovsky district, bayanists, vocalists, dancers and, of course, Snegurochka with Ded Moroz. So the guests of the holiday tried to give a little of New Year's miracle.

“It's a great pleasure to see you all here, and I wish your dreams come true. We all had a difficult year, but despite this, the Kirovsky and Moskovsky districts are flourishing, new facilities are opening. And this is a traditionally “sacred” place where New Year tree parties have always been held. My most vivid memory from my childhood is this tree, bearded fairy-tale characters, slides. And now a new generation is coming here, and for this, I would like to thank TAIF Group and our Kazanorgsintez, which do all this for the residents," shared the head of the Kirovsky and Moskovsky districts, Sergey Mironov.

This year, citizens have even more reasons to get to the Pine Grove Park. The winter town has been opened on the territory of the park. In the evening, the illumination lights up here, and food trucks are installed on the sides of the site, where visitors will be fed or warmed with hot tea. Maria Ilyina comes to the park every morning. She is 84 years old, but she does not count her age — while everyone is sleeping, she is engaged in Nordic walking, keeps herself in shape. Now, she says, it is even more pleasant to walk around the favorite place.

“I live in the next block, and I came here specifically to see the beauty. I found out that there will be also a concert, and I couldn't miss it. I really like the way the territory looks, the glitter of lights and decorations," said Maria Ilyina.

For more active sports activities, there is an ice rink near the New Year tree. It was possible to test the ice immediately, which Polina Filippova took advantage of.

“I usually go to the ice rink near Simonova street, but now I will go here. My mother and six-year-old sister are with me at the festival — this year she skated for the first time and now she will also try out this skating rink. We plan to walk to the photo zone, and later I will take a walk here with my friends. The mood is very new year," she said.

Such platforms for citizens will appear in 12 more places of the Kirovsky and Moskovsky districts. For residents of the settlement of Yudino, the holiday will be held on December 25 at 5 pm on Ilyicha Street, 1. In the Zalesny residential district, the New Year tree town opened on December 26 at 5 pm on Zalesny Street, 5a. 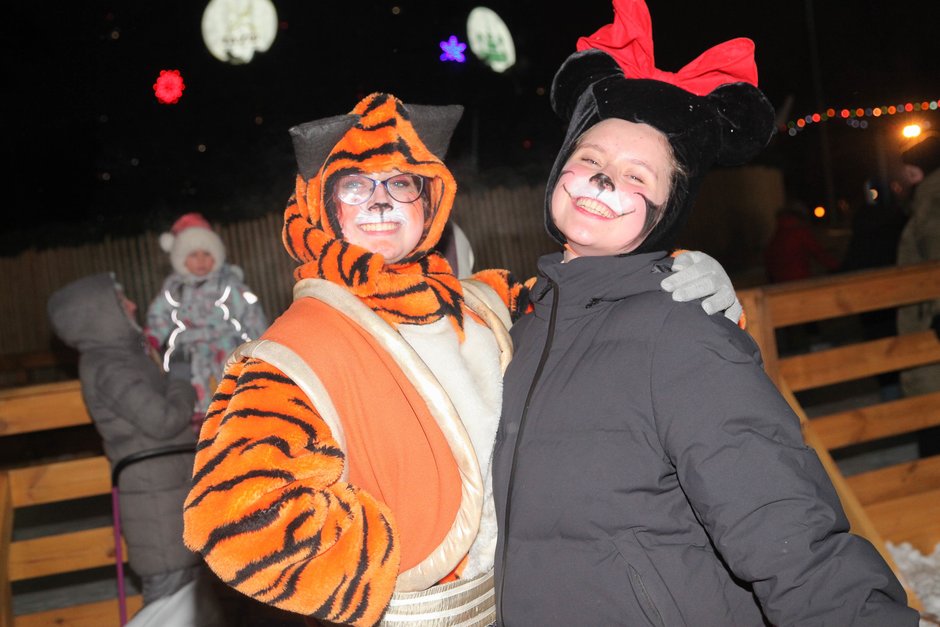