KFU celebrates 215th anniversary with growth of its own revenues

The Imperial hall of the Kazan Federal University held a solemn meeting of the academic council on 27 November, summing up the anniversary year: the university has turned 215. The meeting was attended by President of Tatarstan Rustam Minnikhanov, who is the chairperson of the board of trustees and supervisory boards of the Kazan Federal University.

Ilshat Gafurov: “Today we are 50% self-supported”

The session in the Imperial hall — the university's holy of holies — began with the traditional Gaudeamus performed by the university chapel.

Then rector Ilshat Gafurov made a welcoming speech. He thanked the audience and briefly outlined the results of the anniversary celebrations: he told that throughout the year the university has held a variety of events dedicated to the day of its foundation. These were scientific educational forums, creative evenings, educational projects, museum expositions, innovation and industrial exhibitions, and joint actions with public organizations.

The rector separately stressed that today the university is one of the largest and fastest growing universities in Russia, while the model of its development takes into account global trends, the interests of the Russian Federation, and the priorities of the Republic of Tatarstan. Today, the university has more than 50,000 students, 20% of whom are foreigners from 106 countries. Over the past decade, the university has created new specialized institutes from scratch, equipped more than 200 laboratories.

“Today we earn more than 50% of our budget independently, and this gives the university the opportunity to autonomously implement various projects within its own development model: for example, to develop a completely new medical cluster for us,” said Gafurov. “We have built a profitable partnership with colleagues from other scientific departments and universities, both from Russia and abroad. We are building fruitful cooperation with partners from different areas of the economy.”

Rustam Minnikhanov: “The university can always count on the full support and understanding of the republic”

Rustam Minnikhanov, the chairperson of the board of trustees and supervisory boards of the Kazan Federal University, began his congratulations by listing the glorious names of the great scientists of the past who worked here once: Lobachevsky, Nuzhin, Zinin, Butlerov, Zavoysky, Altschuler. He reminded that never, not for a day, the university suspended the education process and the work of scientific schools: neither during the revolution nor during the war — First World War, Civil War and the Great Patriotic War or during the postwar reconstruction. And today's older generation of faculty and technical staff of the гniversity are those people who have done everything to organize the work during the economic transformations of the end of the last — the beginning of this century.

“Dear friends, the current stage is characterized by large-scale projects to strengthen the material and technical base, the development of new scientific areas, the expansion of international contacts. All this has become possible thanks to the support of the federal center, Russian President Vladimir Vladimirovich Putin, various ministries and departments. I want to thank all the staff and students of the university for their hard work and academic success. I wish you to keep sacred the traditions laid down by previous generations. This is our responsibility to future generations of teachers and students. The university can always count on the full support and understanding of the republic. Many thanks for your contribution to the development of our republic!” the president said.

After the welcoming words, the ceremony of awarding the state awards of the Republic of Tatarstan began. The main award of Tatarstan — the order ‘For Merit to the Republic of Tatarstan’ and the banner of the order — Rustam Minnikhanov presented to the Kazan (Volga) Federal University with the wording “for particularly outstanding achievements of the university staff in the development of education in the republic, a great contribution to the training of highly qualified specialists”. The president pinned the order to a new banner, which took its place in the Imperial hall of the University.

Ilshat Gafurov in his speech of gratitude reminded that the Kazan Federal University has repeatedly been marked by high state awards: in 1954 it received the order of the Red Banner of Labor, and in 1989 — the highest award of the USSR — the Order of Lenin.

After the university, Minnikhanov awarded individual employees: for example, Yury Alaev, the chief editor of author's TV programs of the KFU, the advisor to the rector received the medal of the Republic of Tatarstan ‘For valiant work’, and Rector Ilshat Gafurov — the honorary title ‘Honored Scientist of Tatarstan’. Associate Professor of Educational Psychology Eduard Volchkov has become the honoured worker of higher school of the Republic of Tatarstan, and the director of the university's youth policy department, Yulia Vinogradova, — an honoured worker of youth policy of Tatarstan.

After the ceremony, Talia Khabrieva, academician, congratulated everyone: she read out the welcome speech of the president of the Russian Academy of Sciences. The solemn meeting of the academic council ended with listening to the hymns of Russia and Tatarstan.

The 215-year history of the university continues, new achievements and new challenges are ahead. 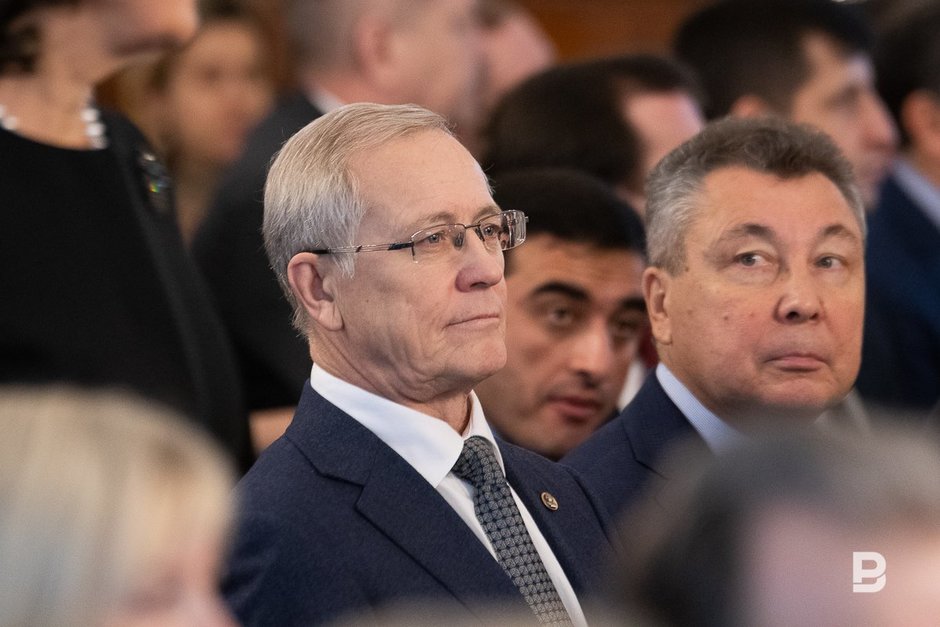