Farid Mukhametshin on large families: ''They don’t have a bean to build even a hovel''

Public hearings took place in the Tatarstan State Council on 1 March – national projects were discussed. The parliament is going to know the opinion of the public about every project – on that evening it was the turn of Demography and Health Care, which have 8,2 and 5,7 billion rubles respectively planned in the Republic of Tatarstan. State Council speaker Farid Mukhametshin criticised previous decisions, particularly the law on allocation of land to large families. According to him, ''such families do not have a bean and they can't build even a hovel'. In the end, land parcels were sold to the rich who are now requiring the state to provide with modern comforts in the fields. Realnoe Vremya tells the details.

12bn to be given for roads, 38m – for workforce productivity

Tatarstan will allocate 48,5bn rubles on national projects in the next three years, of which 34,3bn come from the federal budget. Safe and Quality Roads (SQR) is the most expensive project, 12,7bn rubles are planned for it, including 6,9bn from the federal budget. It's supposed to put 85% of the street and road network in a due state by 2024, reduce the number of accident clusters by 50%, build a Moscow – Nizhny Novgorod – Kazan highway. 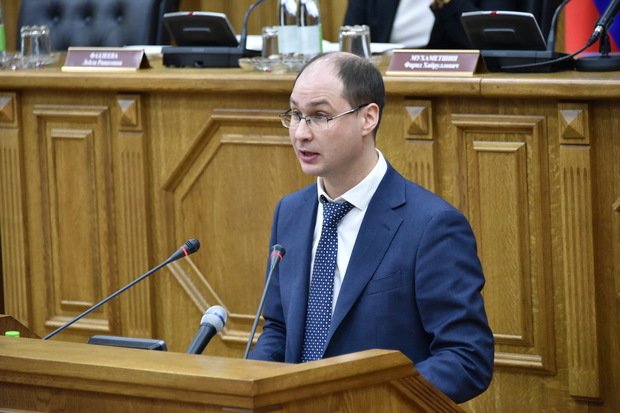 According to Tatarstan Deputy Economy Minister Oleg Pelevin, national projects must be financed not only by money sent to meet the agreements. Certain money was planned beforehand. Photo: gossov.tatarstan.ru

Some projects don't have money planned at all. But, according to Tatarstan Deputy Economy Minister Oleg Pelevin, national projects must be financed not only by money sent to meet the agreements. Certain money was planned beforehand.

Demography and Health Care: order to live to 80 years and don't die from cancer more often than 185 times for every 100,000 people in population

Every ministry and functionary has an appointed national project. The Tatarstan State Council intends to hold hearings, so that representatives of the public could ask responsible people questions. Vice-Primer Leyla Fazleyeva supervising the social sphere in the government is responsible for Demography, Health Care and Culture.

The main tasks of Demography are to augment natality, create seats in kindergartens and increase lifespan. To achieve the first goal, Tatarstan introduced payments for the first and third baby for countryside residents who gave birth before they turn 25 and 29 respectively as early as 2018. The main tasks of Demography are to augment natality, create seats in kindergartens and increase lifespan. Photo: David Kazansky

We need to augment the average lifespan to 80 years, at the moment, it's 74 years in Tatarstan, according to Fazleyeva. Health Care correlates with Demography. Here it's given a task to reduce workable people's mortality to 350 people for 100,000 people in the population, Tatarstan has 416 at the moment. Mortality from cancer is to be reduced to 185 cases for 100,000, now it's 198 in Tatarstan.

The main focus is made to improve primary care. This is, as the vice-premier said, 50% of success, as well as to reconsider treatment procedures of patients with cardiovascular diseases and provision with doctors.

''We can criticise the Pension Fund for the built skyscrapers. Yes, they were built, should we destroy them now?''

''The population in Kazan has reduced by 4%. Today the number of residents of Tatarstan is reducing because of migration. The situation in Ukraine is stabilising – migrants won't come from there. The situation in Asia is becoming better, and we've decreased the construction of facilities. We need to seriously think about how to support young families to keep natality.'' Chairman of the Tatarstan Union of Gardeners Vladimir Deynekin offered to provide young families with land parcels in suburban settlements for free as a supporting measure because they began to live there all year round having obtained the right to register in gardens despite the absence of conditions. The idea is unlikely to meet support, but Mukhametshin was also concerned about gardeners.

''I recently was at a meeting of the lawmakers of the country, your Russian boss gave a speech there,'' he addressed Deynekin. ''I didn't leave this meeting satisfied. Land parcels started to be given to provide large families. They don't have a bean to build even a hovel there. Then they were permitted to sell the land, and rich people began to buy it and created new problems. These not poor people built hundreds of houses and are asking authorities questions today: 'You must solve our communal problems: lay roads, provide with light, gas, water!' How will we solve this problem? We don't have money!''

The speaker of the parliament expressed his opinion about both the pension and waste disposal reforms: ''Political opponents have chaired these topics – Navalny and other parties – to look good in front of the people.''

''Today there is 1,5 pensioner for one worker, and there will be two. We can criticise [the Pension Fund] for the built skyscrapers. Yes, they were built, should we destroy them now? As for the waste disposal reform, a better solution [than the waste incineration plant] hasn't been made up. Should we send Kazan waste into space? We need to solve these problems, and we will take on this issue, so that our descendants will live in clean cities. And waste will be incinerated,'' Mukhametshin said.