''Who could have imagined that bloggers would become stars''

''Employers name adaptability, the ability to learn quickly the most important qualities for the employee. Gone are the days when we received education once and for all and worked in one place all our life,'' Deputy Minister of Education of Russia Irina Potekhina said at EDU Russia forum. Indeed, judging by the topics discussed at Kazan Expo, global changes are taking place in education. They concern both kindergartens, vocational institutions and universities. Information security in schools, changes in the labour market, training of teachers, controversy over the Unified State Exam and other acute issues were discussed at EDU Russia forum for two days. Read the details in the material of Realnoe Vremya.

The development of vocational education is associated with advanced training centres

On the first day, EDU Russia forum in Kazan Expo was visited by more than 4,000 people. Teachers not only from Tatarstan, but also from all over Russia came to listen to Russian and foreign specialists in the field of education. During the breaks between the sections, they exchanged experiences, shared their feelings about the situation in education. The organizers of the forum — the ministry of education and science of the Republic of Tatarstan and Tatarstan Investment Development Agency divided the speakers' speeches into several sectors.

''Key indicators of the development of vocational education are associated with the centres of advanced training, they should appear in all regions of the Russian Federation. It is also important to open the network of five thousand workshops, to introduce a demonstration exam, mentoring in colleges, to update the list of specialties,'' Aleksey Ovchinnikov listed. Changes in the vocational education require financial investments, retraining of teaching staff, and a different level of interaction with employers. In addition, now the vocational institutions are focused on international standards, such a bar was set by WorldSkills movement.

First Deputy Minister of Education and Science of Tatarstan Andrey Pominov noted that Kazan is ready for the implementation of the national project Education.

''We have a huge labour market for adults''

Meanwhile, it is impossible to predict which specialties will be popular in 5-10 years. Now the labour market is being in the state of uncertainty.

''We don't know what will happen tomorrow. Technology is changing the labour market so fast that no forecasts are justified. How to prepare children in such conditions, so that tomorrow, when they get an education, they enter the labour market and do not fail? This is directly related to vocational education because this education is closer to the labour market than schools and universities. We see how the demand for talent is changing. Who could have imagined five years ago that bloggers would become stars making millions? Who would have thought that startups on the Internet would be millionaires? Only 10 years ago, these people would have been marginalized, not built into our ranks, but today they are stars,'' Irina Potekhina, the deputy minister of education of the Russian Federation, said at the forum.

She suggested that in 10 years the most popular profession could be a nurse, because after 2025 there will be more than a billion people over 60 years on the planet. In any case, employers and employees of the labour market expect job seekers to have the skills of adaptability, the ability to obtain new skills quickly.

''Gone are the days when we were educated once and for all and worked in one place all our lives. Maybe there will remain reserves, which will have professions that can live for several decades, but now this almost never occurs. You yourself know, if you do not learn – you lags behind. We have a huge labour market for adults. Soon we will see that they are financially interested in the education system and are ready to pay money for a new qualification,'' said Irina Potekhina. 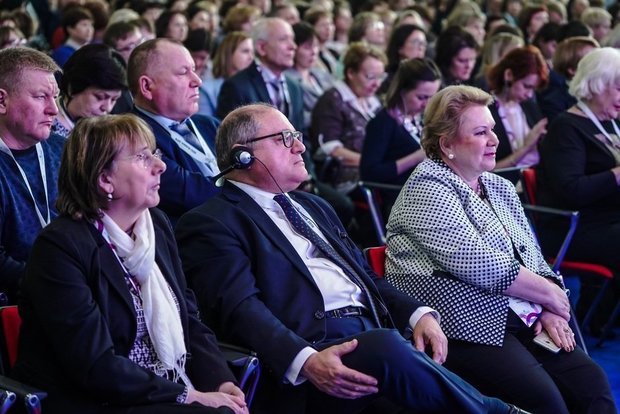 The most acute topic of the first day of the forum was the issue of safety of education. Speakers discussed how to make schools safe

A teacher should become a coach

The most acute topic of the first day of the forum was the issue of safety of education. Speakers discussed how to make schools safe, and also drew attention to the emotional coldness of many children, which is one of the signs of schizophrenia.

Gil Noam, Ph.D., the founder and director of The PEAR Institute: Partnerships in Education and Resilience, said that he studies emotional stress among young people, teaches them not only psychological safety, but also physical. He also noted that within two or three decades in Germany and the United States a third of the existing professions will be replaced by artificial intelligence. The work of doctors, lawyers, teachers will be radically changed. But today schools are not ready for this.

Students focus on memorizing facts. This is not what the future generation needs. The information is on the Internet. Students should be flexible, as they will often have to change jobs. The next generation must learn how to solve problems, to work in a team. The profession of the teacher is changing. They have a new role: to be coaches, to support students through games, conveying information, said Gil Noam.

''The generation manipulated by 'whales' has no fear of suicide''

Speakers also saw a threat to the psychological health of students from the Internet. Elvira Naumova, the director of the school No. 179 in Kazan, noted that a content filtering system has been built in Tatarstan and a child cannot access prohibited sites inside the school. The school conducted an anonymous survey and found that 60% of students in 1-4 grades actively use gadgets, and by the age of 16 almost 90% of children have experience in social networks. However, teachers were pleased that the first in the list of interests of students is the websites with ready homework. Elvira Naumova, the director of the school No. 179 in Kazan, noted that a content filtering system has been built in Tatarstan and a child cannot access prohibited sites inside the school. Photo: kzngo.ru

According to Elvira Naumova, children become active Internet users at the age of 12. At this age, parents cease to control the child, believe that he is an adult. However, there, on the Internet, children can be subjected to cyberbullying. Yury Afanasyev, a psychiatrist, the head of the children's department of the Vologda regional psychoneurological dispensary No. 1, disagrees with the age, which accounts for the peak of the child's involvement in the Internet.

''We have been engaged in information security from a medical point of view for eight years. The colleague said that the peak of involvement in the Internet is 11-12 years, but, unfortunately, it is not so. Active Internet users are children from 7 to 8 years. If after leaving the kindergarten 5-6% of children have their accounts in social networks, by the end of the first grade already 90% of students are registered in social networks. Our task is to understand what is happening in the short period when mass registration in social networks begins,'' said Yury Afanasyev.

He also noted the low media literacy of parents who, without knowing it, on their pages in social networks spread suicidal content, information about psychoactive substances. Farid Mukhametshin addressed the theme of the Unified State Exam. He noted that in general it is a good thing, but the teaching staff feels disunity

The second day of the international educational forum started with a plenary discussion with participation of Deputy Minister of Education of the Russian Federation Irina Potekhina, Chairman of Tatarstan State Council Farid Mukhametshin, Minister of Education of Tatarstan Rafis Burganov and Head of the Tatarstan Investment Development Agency Talia Minullina. The main attention was paid to marketing in education, training for business and educational journalism.

During the plenary discussion, Farid Mukhametshin addressed the theme of the Unified State Exam. He noted that in general it is a good thing, but the teaching staff feels disunity.

He noted that teachers are jealous of colleagues who tutors children for the exam. They are approached for tutoring, they have more income. This creates tension in the team. Farid Mukhametshin suggested to think about how to solve this issue.

Head of Tatarstan Investment Development Agency Talia Minnullina told about private investments in education. She noted that in the overall structure of private investment in Russia education does not hold teh top spot because it is long-term investment that can not be recouped in 2-3 years.

''In addition, this is due to our legislative shortcomings: the law on public–private partnership does not yet involve private investment in education. I am sure that the new national project Education necessarily stimulates the improvement of legislation in the field of private investment,'' said Talia Minullina. Talia Minnullina cited the example of Kvantorium scientific and technological, interactive complex where children will study the laws of physics, chemistry

The sphere of education opens up opportunities for investors in digitalization, construction of private schools, kindergartens, universities, museum complexes. Talia Minullina gave an example of the project of Kvantorium scientific and technological, interactive complex, where children will study the laws of physics and chemistry. This project can not be implemented only at the expense of the budget. Now the proposal for private investors to participate in such projects is being prepared.

She suggested paying attention to the implementation of private schools abroad. In India, for example, private schools are required to provide 25 per cent of places to low-income pupils, and Pakistan is opening family private schools. However, Kazan also has such an example.

''A mother, who gave birth to an autistic child, gathered 12 such mothers and opened a school for autistic children using private funds. Now there is a waiting line from other regions to study at this school. This forum is also one of the few platforms in Tatarstan, which we have created at the expense of sponsors and have not spent a single ruble of budget funds, which means that the topic of education is acute and necessary,'' said Talia Minullina.

It should be noted that the forum included more than 50 events in 13 areas. The event was attended by 146 experts from five countries — Russia, Finland, the US, Holland and Italy.