The Kazan IT Park became a platform of discussion of the medical community's problem on 22 September. Palliative care specialists gathered to talk about problems and prospects of the new and special area of the sector. Today 50% of the needy don't get palliative care in Russia while it could considerably relieve patients' pain and suffering. Realnoe Vremya's correspondent was at the conference and tells the details.

''Resources need to be distributed correctly''

According to the World Health Organization's statistics, only about 14% of people who need palliative care receive it today in the world. Almost 1,5 million people need palliative care in Russia. The global need for palliative medical care will grow further due to the increasing burden of non-communicable diseases and the population's ageing.

It's what specialists talked about in the Kazan IT Park. Russian palliative care specialists gathered at Palliative Care. To Better Life through Professionalism and Mercy Russian conference. Bright representatives of the professional community were on the panel of the plenary session among whom one could also see ex-Health Minister of Tatarstan and today's Russian State Duma deputy Ayrat Farrakhov. After several welcome words emphasising the important role of palliative care and the necessity of discussing problems linked with it, the participants switched to reports.

Visiting palliative medical care specialist of the Russian Health Ministry Diana Nevzorova took the floor first. Her speech was about the development of palliative care in Russia. ''To develop palliative care, nurses, functionaries, social services, all types of power need to cooperate because nothing will work out without the top power's decision in the professional community,'' Nevzorova noted.

According to her, palliative care is a new and necessary medical care that improves the quality of life.

''It's the same professional help but with other possibilities. And patients need to receive the help they want,'' the speaker claimed.

Nevzorova told the most population of the country doesn't go to the hospital, that's to say, almost doesn't spend Russian health's money. There are much fewer patients with complicated diagnoses and concomitant diseases, but huge resources are spent on them. And these resources need to be distributed correctly. From the speaker's point of view, correct distribution of resources will help to economise money and improve patients' quality of life.

In addition, palliative care needs to be expanded, that's to say, it's necessary to integrate it not only into oncology but also cardiology, psychiatry and other departments.

Half of the country doesn't receive necessary palliative care

Nevzorova says that today 50% of the population doesn't receive necessary palliative care. Speaking about the last year of life (people who die during one year), it's about 600,000 people a year. But if we're talking about people who won't die until 31 December but suffer from a disease, their number reaches 2 million people.

''First of all, patients who suffer from chronicle incurable diseases and have certain functional activity limitations, lost weight need such care. Most importantly, they have different sufferings, often turn to specialised care, often call the ambulance,'' told Diara Nevzorova. 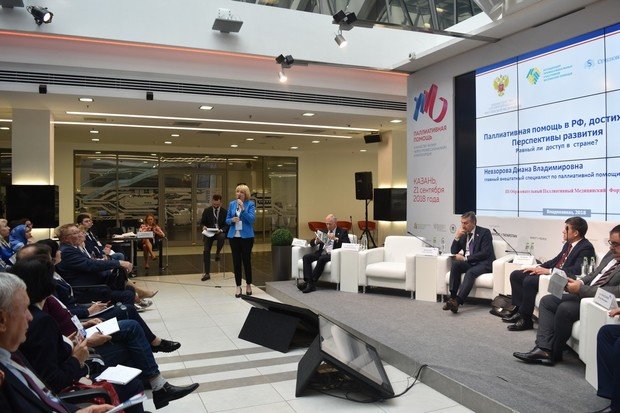 Among key problems, the speaker noted the lack of core medications that palliative care specialists must have in hand

She thinks that all patients with metastatic cancer must be consulted in the palliative care department. Pain is the most widely spread reason patients suffer from.

''We understood in practice among adults but haven't got it among children. A four-year-old child with advanced brain turmoil was consulted in Vladikavkaz yesterday. And only the whole team of Moscow specialists assured local specialists to prescribe the children who complain about headaches morphine. Moreover, adults with this diagnosis successfully get rid of the pain in Vladikavkaz. There is such narrow-mindedness. We see unequal access,'' Nevzorova claimed.

Among key problems, the speaker noted the lack of core medications that palliative care specialists must have in hand.

''Not everyone has even morphine injections, they don't have usual anti-vomit medication,'' Nevzorova claimed. Just 17% of countries have a good anaesthetic for patients today. In addition, the worse health level is in the country, the worse palliative care is.

Russia made a significant step in developing palliative medicine after the annual press conference of the president of the Russian Federation on 14 December 2017 who urged to expand the concept of palliative medical care and specify the procedure and the procedure of social service provided to incurable patients. 4,35bn rubles of budget money have been allocated from the Russian Government's reserve fund in 2018 to provide inter-budgetary transfers to the federation's regions to develop palliative medical care. The Ministry of Health included the road map of palliative care development to the state programme.

Despite it, regions still have big problems. In addition, there is leaning inside the regions. For instance, the number of applications for painkillers from Stavropol Krai is equal to the number of people who die there.

''At the same time, Dagestan is in trouble. Mortality structure is big while they order little medication,'' Nevzorova put an example. Russia has many unanesthetised patients today. 18 regions don't have palliative care service in the hospital for adults, it's 21%. Another 29 regions don't have visiting services, 28%. The quantity of patients who discharged the hospital with a prescription for at least weak opioids is 0,2% of the total quantity. And another 0,2% people get the medication after

''It means almost none,'' the health ministry concluded.

As a recommendation, he offered to resort to the programme of state guarantees that explain palliative care norms.

''Then supervision bodies must control how regions meet these norms,'' the deputy concluded.

Chairman of the Russian Palliative Care Association Georgy Novikov focused his speech on weak links of the organisation of Russian palliative care. Doctors who deal with palliative care don't have a chance to complete a residency programme because they don't have a scientific degree. The organisational structure also has weak links – direct inpatient wards are still absent.

''A patient could be hospitalised in daytime and sent home at night,'' the professor stated.

Tatarstan has already created a course to develop the system, doctors assure. Deputy Head Doctor of the Republican Oncological Centre Ilsur Shaymardanov told about it.

The Republic of Tatarstan is one of the pioneers in Russian palliative care. One of the first palliative care departments opened in Kazan in 1993. It's the only department in Russia to offer palliative medical care around the clock and it covers the million city's population.

Today the department has four 24 hours and three daytime mobile brigades. Critically ill oncology patients have been visited 522,320 times, 26,301 people received detoxification therapy, 7,134 had chemotherapy, there have been 12,898 cases of hospitalisation to the centre's surgery department over the years of work. A palliative care room is to appear in every district of Tatarstan soon, Shaymardanov told. A palliative care room is to appear in every district of Tatarstan soon, Shaymardanov told

The speaker said over 58 million people died in the world every day, of whom 9 million people have malignant neoplasms. It's forecasted cancer mortality is going to grow to 11,5 million by 2030. Consequently, demand for palliative care will also increase. The number of people who die from cancer will reach 2bn people by 2050.