The execution of the tsar’s family: there is only one complicated story…

In the second part of the talk about the execution of the tsar's family in July 1918, Doctor of Historical Sciences Vladimir Buldakov explained Realnoe Vremya why the Bolsheviks didn't tell the truth about the execution then and why there were enough historians inclined to present the figure of Nicholas II not exactly objectively.

Do you suppose one should once and for all reject the version that Vladimir Lenin was very interested in the tsar's execution who allegedly took his revenge for his older brother Aleksandr who was hung by order of the tsar's father for an attempt on his life in 1887?

The case is that Lenin, as I said previously, approved terror of the masses, without any orders from the top. This is important!

Why did the Bolsheviks officially say about only the tsar's execution in 1918, not the whole family? Didn't they dare to spoil relations with foreign countries, which were already fragile, where the tsar's relatives lived?

Can we know any new truth about this event in the archives or does society know everything about the tragedy in Yekaterinburg?

There is nothing new any more. From time to time, the issue of the identification of the remains of those buried in the Saints Peter and Paul Cathedral in 1998 is raised by same monarchists again. They are concerned again if Nicholas II and all his family's remains were real. The case is that many people thought in 1998 the burial of the remains was a purely political step of Yeltsin, and there are still doubts these remains belong to the tsar, empress, their children. It happens because the Russian Orthodox Church thought abroad the remains had already been identified once by Kolchak's commission. In brief, we have a complicated story in front of us, it's hard to say what will happen. But this is the only news that can appear in this case. 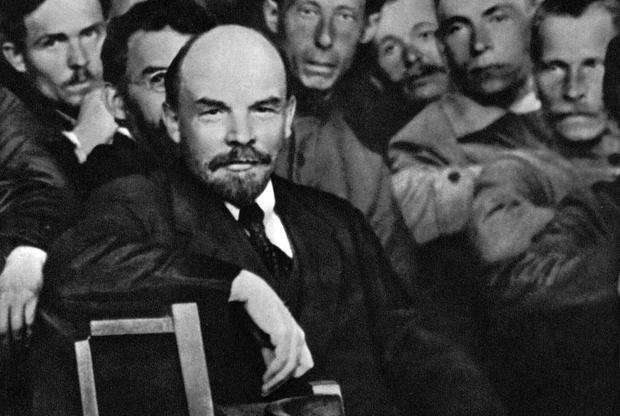 ''Lenin approved terror of the masses, without any orders from the top. This is important!'' Photo: h-rf.ru

Yeltsin's attitude to the figure of Nicholas, to tell the truth, was unclear despite his participation in the burial of the imperial family's remains 20 years ago. It's known he went to Petersburg only after a pressing petition of academic Dmitry Likhachyov, while he had been refusing. Do you understand the attitude of current power, President Putin to the last tsar?

I suppose current power has enough on its plate without Nicholas II, this is about the attitude. If society requires something, power reacts. As there isn't such a requirement, the Kremlin doesn't have guidelines on this topic, I think. And even if the current Patriarch is quite active in this respect (Editor's Note: the Russian Orthodox Church doesn't recognise Nicholas and his family's remains, which were officially recognised they are and buried in Saint Petersburg), this doesn't so far mean it's not an official point of view. It's just Kirill's political steps. This probably means our society has many monarchists, and it's a natural occurrence. Monarchists want to obtain foundation in our political confusion, they want to revive sacral power – the previous canonisation isn't enough for them, but this has nothing to do with history.

Can we think Vladimir Zhirinovsky a serious monarchist who has recently claimed the word ''monarchist'' will be added to his party's name?

Does it matter what Zhirinovsky has said? He needs to say something sometimes and he does! He wants to draw attention to his personality once again and here it goes: today he is saying one thing, tomorrow he can say another thing – it's his usual style of behaviour.

You're a person from the scientific environment. And I'd like to ask, does a sound position about Nicholas II like yours start to appear in your environment or is it too difficult for a big number of historians to admit the same execution of the tsar was just one of the civil war acts? I take Dilettante, Historian history magazines and see how editors and authors lay this event out so that the whole country should cry and noisily judge the Bolsheviks. And this happens not only in magazines…

We can call Nicholas II a victim of the revolution, and there is nothing surprising here. And we can understand our colleagues judging by their behaviour from purely humanistic positions. Here we can add the environment of professional historians has its own monarchists who try to pose, if not insist, Nicholas II, as an innocent victim, if not an outstanding person.

By the way, if Nicholas II had survived, there wouldn't have been any numerous talks about him. People would have treated him as Kaiser Wilhelm II who was in exile after abdication, even if people went on insulting him. Here we can say the only historical merit of Nicholas was that he allowed to execute himself and his family. If this hadn't happened, he would have been unnoticeable in today's history. He would have existed as a ''colourless'' person who was at the wheel of the country. That's it. ''If Nicholas II had survived, there would have been any numerous talks about him. People would have treated him as Kaiser Wilhelm II who was in exile after abdication, even if people went on insulting him.'' Photo: wikipedia.org

How should Russian society assess what happened in Yekaterinburg 100 years ago, in the basement of engineer Ipatyev's house? I understand it's still early to expect a normal assessment due to its insufficient historical education, but anyway…

The public opinion develops according to its own laws, and these laws very often don't coincide with the opinion of specialists, and this is not surprising. But I will repeat my opinion here: as this is a closed chapter in our history, it's important to understand the terror, cruelty, including the execution of the tsar's innocent children, arose from society's critical condition then, which had a long-lasting story. Yes, the Bolsheviks shot the tsar's children, this is a fact. But not this is important, it's important to understand why this became possible, and why the tragedy caused not empathy but repulsion.

Mr Buldakov, we agreed to dedicate the next talk to the events that happened 100 years ago or, more precisely, the events during the civil war, including the events in our Volga region. What would you like to tell history fans and readers of Realnoe Vremya in this respect before the next talk?

It's important to know the civil war began on 25 October 1917, not with the Revolt of the Czechoslovak Legion like many people still think. It was generally believed in the USSR, in the style of Lenin, if you like, the triumphal march of Soviet power began on 25 October, while 14 imperialist powers impeded it. But this was a complicated process. And the influence of interventionists on the course was insignificant and tiny. There is no doubt of this, perhaps excluding the events in Ukraine where the Central Rada asked German forces to help. And I will say the interventionists rather played into the Bolsheviks' hands than that of the opponents. This caused a patriotic upsurge in certain circles like they're attacking us, and we need to protect the country.