Why did the heads of Tatarstan companies ignore ''Ural Hannover''

At the main industrial exhibition of the country INNOPROM 2017, which is considered to be ''Ural Hanover'', Tatarstan for the first time has presented its own industrial developments ''digitally''. The flagship exhibition ''Made in Tatarstan'', bringing together seven key sectors of the economy, was broadcasted virtually, on several giant screens, and only KAMAZ came to the exhibition ''live''. And it was lucky: near the stand of NAMI — a partner of the plant — Vladimir Putin saw ''live'' the unmanned KAMAZ vehicle, which, as he assured the head of the state, could start operating right now. A little further, another new development was left without attention — the dropside truck KAMAZ-65120 using liquefied gas. But it was noticed by President of Tatarstan Rustam Minnikhanov. Read the details in the material of Realnoe Vremya.

The Japanese are ''not as the Romans''

The practical work at the 8th International Industrial Fair INNOPROM 2017 started in Yekaterinburg. This year it is held under the slogan ''Join smart manufacturing SFACTORY.Tech'', it means that it is entirely dedicated to introduction of lean production technologies. ''Smart production: global approach'' – it is the agenda Japan proposed, this year Japan acts as a partner state of INNOPROM 2017. Following the stated theme, famous Japanese companies brought to Ural the newest exposition of metalworking machines and equipment, because of which the Russian top management themselves often come to visit us.

This time, INNOPROM 2017 has been attended by famous brands such as Yamazaki Mazak (where Kazan Helicopters plant used to purchase at its palmy days), Fanuk, the provider of solutions for industrial automation (whose production was personally visited by Rustam Minnikhanov during the ''Japanese tour'' last spring). There is no doubt that being at Innoprom 2017, the large Tatarstan delegation headed by the president did not pass by them and looked for new contacts to continue negotiations on renewal of production. Taking into account that it is composed of aide to RT President on aviation complex Ravil Zaripov, responsible for the modernization of the Kazan aircraft plant, the negotiations on this subject, most likely, were continued here. After all, the aircraft factory needs more than any of Tatarstan enterprises new machines and equipment.

Anyway, this year the exhibition has brought together national stands of 20 countries, including Germany, Italy, China, South Korea, who compete with Japanese producers. It is noteworthy that before 12 o'clock in the afternoon the exhibition halls of INNOPROM 2017 were closed for mass visiting, as evidenced by the ad on the homepage of the website. The organizers for the first time gave the top persons and VIP guests the right of the ''first morning'' for a detailed examination of the exhibition.

Rustam Minnikhanov and members of Tatarstan delegation took advantage of this timeout. As the press service of the President reported, during the examination the head of the Republic acquainted with the latest technologies and products in the field of metalworking, production management, innovative solutions in the field of automotive engineering and robotics. Along with him, the high-tech achievements of the Land of the Rising Sun were seen by Minister of Industry and Trade Albert Karimov and his two deputies, a frequent guest in Japan, the head of the CCI Shamil Ageyev and other officials of the Investment Development Agency and the Presidential Administration of Tatarstan. It surprises that the Tatarstan delegation did not include a single head of Tatarstan companies. Whereas last spring at a meeting in Tokyo together with President of Tatarstan there were almost all generals of the Tatarstan business.

In the Russian zone of INNOPROM 2017, the Tatarstan president could not help but pass by one of the main pavilions of the Ural business — the holding company Renova of Viktor Vekselberg. Then he went to the stands of Shvabe by Rostec, which includes several defence enterprises of Tatarstan. By the way, Rostec this year presented a concept stand dedicated to the transfer of military technologies to the civilian sphere. Schvabe is assigned a special role. Later Rustam Minnikhanov visited the stands of PNK Group, UAZ, and several small and medium-sized enterprises of Russia. ''Made in Tatarstan'' in virtual view, KAMAZ came on its own

Tatarstan exhibited the united industrial exposition in virtual form. ''The transition to ''digitalisation'' fully meets the general spirit of the exhibition,'' said the press service of the Ministry of Industry and Trade of Tatarstan. The economic potential of Tatarstan was presented virtually: multiple screens were broadcasting graphic information about the dynamics of development of the basic branches of Tatarstan — oil production, oil refining, mechanical engineering, aviation, chemical industry. From here it follows that Tatneft symbolizes oil and KAMAZ — mechanical engineering. They are united by the flagship Internet portal Made in Tatarstan,'' concluded the press-service of the Ministry of Industry and Trade. Who was the organizer of the visit of the government delegation, and what amount was allocated for this purpose — it was not specified. Apparently, the budget was several million rubles. It is expected that the head of the Ministry of Industry and Trade of Tatarstan Albert Karimov will sign a cooperation agreement with GC Penetron.

The only one who decided to come in person turned out to be KAMAZ, and, as it turned out, it was rewarded with the attention of the chief guest of the exhibition — Vladimir Putin. The head of the state during the morning ''timing'' stopped near the unmanned KAMAZ vehicle and even looked inside. ''The unmanned shuttle is the joint development of KAMAZ and NAMI, which was exhibited at the stand of our partner,'' explained the head of the press service of the plant Oleg Afanasiev. ''The president was informed that the vehicle is designed to transport people in enclosed areas of enterprises or industrial parks,'' he said. According to him, in the nearest future KAMAZ intends to equip the airport Begishevo with them to transport passengers. However, Director General of KAMAZ Sergey Kogogin did not attend the exhibition.

Anyway, KAMAZ brought to the exhibition another cherished new development. It is the pre-production model of onboard dump truck KAMAZ-65 2017 with a lifting capacity of 15 tonnes. ''This is the only truck that runs on liquefied gas (not to be confused with compressed gas!),'' says Afanasyev. ''What is more, it is an operating exhibit: the truck arrived from Naberezhnye Chelny to Yekaterinburg by itself. The main difference is the tank, where liquefied fuel can be stored, whereas there others have it compressed. Besides, it is not inferior to them — the same mileage — 1 200 km. As soon as there are orders, the series production can be started,'' he said.

On the very first day, KAMAZ signed an agreement with X5 to supply 100 methane-diesel trucks. ''In the nearest time the supply starts,'' said Oleg Afanasyev. The head of the state stopped near the unmanned KAMAZ vehicle and even looked inside. Photo: kremlin.ru

Kudrin's testaments: those who do not work with ''digitalisation'' will lose production in 6 years

INNOPROM 2017 turned out to be the place of heated discussions on a wide range of economic issues. Thus, the head of the Center for strategic development Alexey Kudrin predicted that ''those who do not work today with ''digitalisation'' will lose their production in six years. Everybody should understand this. People do not have this understanding yet,'' he said.

According to him, today there are companies that implement the programme of ''smart'' technologies, including Russian companies. ''Today the problem is not the availability of these models, programmes and opportunities, but the demand of the business. We have the biggest problem, the bottleneck, in Russia – it is business demand for such programmes. They do not feel that this is the future, that they need to invest,'' said Kudrin. In his opinion, Russia is far behind from the world of digitalisation, so today we need to solve the issue of stimulating these processes — the government programme ''digital economy'' will help in this as well.

''The fact that the president and the ministry begin to work in this area indicate that within two years, I'm sure, everyone wakes up,'' said Kudrin. 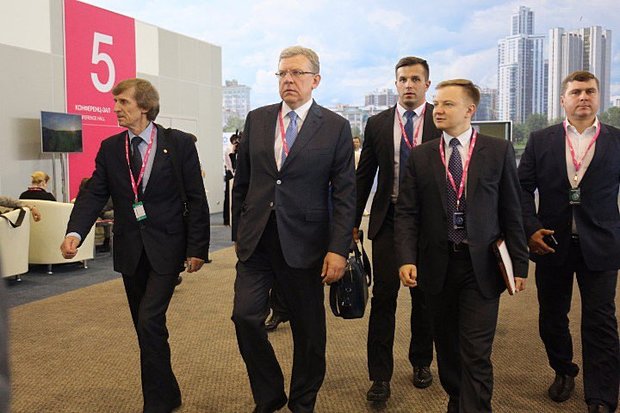 Alexey Kudrin predicts that ''those who do not work today with ''digitalisation'' will lose their production in six years. Photo: znak.com

At the panel session dedicated to transport infrastructure development, Vice President of Russian Railways Alexander Misharin said that for the construction of high-speed railway (HSR) Moscow — Kazan it will be necessary to upgrade a number of enterprises producing rails, cables, rolling stock. He stated this in Yekaterinburg session of Innoprom.

According to Misharin, the HSR will stimulate the economic growth in the regions of the HSR for 10 trillion rubles, which will lead to an increase in revenue by 2 trillion rubles.

Such global projects require implementation of additional mechanisms, such as concession. For the modernization of production, which then will supply products for the HSR, it is needed about 300 billion rubles, according to Misharin.

According to Misharin, Russia has enough its own rails for HSR projects throughout the country, ''the trains will be Russian, we are negotiating on technical implementation with the Japanese as well as with the Germans,'' he said.