The synthesis of Gaudí and Hundertwasser grows in Kazan

The unusual house on Kurashova Street with different windows and rounded corners has provoked heated discussion and has become the subject of discussion not only in social networks. Some Kazan residents believe that the city lacks such bright objects, the others think that it does not fit into the architecture of the capital of Tatarstan. Meanwhile, the author of the project of the house on Kurashova Street has been jokingly named Gaudinov. Read the interview of Realnoe Vremya with the author of the unusual house.

The unusual house on Kurashova Street has attracted the attention of architecture lovers: the pink house with rounded corners is very different from the surrounding houses and cottages. It has the style of Spanish architect Antoni Gaudi and Austrian architect and painter Friedensreich Hundertwasser — it was the wish of the owner of the house, Mikhail Khanin. The object is a row house with three apartments. The area is 569 sq. m. It is known that the building is under commissioning. Few is known about the owner of the building, Mikhail Khanin, except that he is an entrepreneur.

The correspondent of Realnoe Vremya visited the house on Kurashova Street: the facade does really have some similarities with the famous Hundertwasserhaus. First of all, it is in bright colours, has rounded corners and, of course, the shape of the windows, like the Austrian architect's, have different shapes and sizes. As you know, the philosophy of Hundertwasser meant that people should not live in ''similar boxes''. 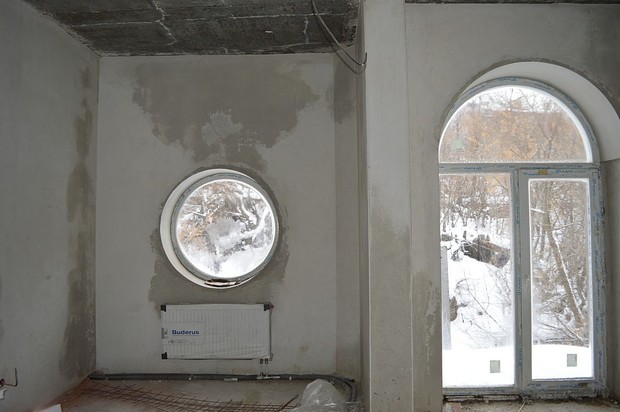 The windows they have different shapes and sizes. Photo: Gulandam Zaripova

Inside the house, there are conventional rectangular rooms to be used as bedrooms or offices, as well as rounded ones. On the third floor, there is a small rectangular window like a door into the rabbit hole, it takes the residents to the terrace. Its walls will also be plastered and painted.

It is assumed that owners will use it as a recreation area.

Perhaps, when designing, the architect based on the style of Hundertwasser, who followed the principle of ''ecological safety". For example, the roof of the Hundertwasserhaus in Vienna was covered with greenery, and the roof of his own home in New Zealand merged into a natural hill.

''I do not know opinions of the colleagues, but on the Internet, you can find different views''

The house on Kurashova Street has been designed by the company PF TaStroyPro.

''The customer wanted it to look like Hundertwasser's or Gaudi's. We worked in this way. From them, we adopted the compositional techniques and graphics techniques on the facade. Hundertwasser's has a flat facade and there are famous drawings. We added plastic, that it has turned out indirect facade. Since the house stands on rather strong relief, we designed the terraces, that is, each block has access to its own platform,'' said the director of PF TaStroyPro Bulat Maksutov.

As Maksutov explained, the organisation of all three apartments is common, but because of the outer curved wall each block has its own characteristics — for example, there might be a balcony, but somewhere it is not.

As Bulat Maksutov recognised, the townspeople who have seen the house under construction, treated it differently.

''I do not know opinions of the colleagues, but on the Internet you can find different views. Some people like it, others not so much. Some people thought that it was either a kindergarten or a swimming pool. There were such interesting epithets as ''a bunker architecture with windows-loopholes with French windows to the floor around the house''. Opinions differ,'' says Maksutov.

The difficulty when designing the house was the fact that the facility is being built in the historic center. Architect Bulat Maksutov says that at first the project was presented to the city planning board, then to the deputy commission, at the end the presidential commission gave a green light.

''I haven't attended the parliamentary and presidential commissions. But during the defense of the project at the city council it was received warmly. On the contrary, they even ordered to keep it better so it was exactly according to the project,'' said Maksutov. Since the house stands on rather strong relief, we designed the terraces, that is, each block has access to its own platform,'' said the director of PF TaStroyPro Bulat Maksutov. Photo: Gulandam Zaripova

According to the website of the department of city-planning permissions of Executive Committee of Kazan, the house has not been commissioned yet. Market sources say that after the commissioning, the apartment will go on public sale. They even called the approximate price – 150.000 rubles per sq. m. The developer prefers not to comment on this topic yet.

''Unfortunately, we have a lot of imitations in Kazan''

Experts have different opinions about the house on Kurashova Street. As the Kazan architects say, they jokingly call the author of the project Gaudinov.

''There are similarities with Gaudí, but more with Hundertwasser, in my opinion. By scale, the object fits the Kazan architecture, by the style, it is unusual for Kazan,'' says architect Artur Aitbagin.

On the contrary, the honoured architect of Tatarstan Aivar Sattarov reacted to the new building in the centre of Kazan quite sceptical. In his opinion, such object looks strange in the historical part of the city and it would be more appropriate to build it, for example, in Innopolis. It absolutely does not fit the architecture of Kazan. We have in Kazan nothing like that. Moreover, it is for no reason appeared in the historical part of the city. I would understand if it was in a district of new buildings. Somewhere in Innopolis, may be, since it is a platform for experimentation,'' said Aivar Sattarov.

He believes that the house on Kurashova Street is reminiscent of neither Gaudí nor Hundertwasser. However, the architect generally has a negative attitude to imitations in art.

''The only sign of true art is originality; art always creates something new. A permanent sign of pseudo-art is that it imitates,'' wrote Brusov. Unfortunately, in Kazan, there are a lot of pseudo-art, imitations. Someone imitates the 18th century — remember the Palace of Agriculture. Someone tries to imitate Gaudí. It's not real art,'' says Sattarov.

However, there are enough supporters of that house, too.

''This house is radically different from the adjacent neighbours and it stands out from the overall classic-dreary urban drabness. Perhaps, it will set the tone in the future. It is a good thing that it appeared. Fresh, innovative, dynamic. Kazan lacks extraordinary architectural decisions,'' said the director of real estate agency Anastasia Gizatova.

In her opinion, the project could be called ''In the footsteps of Gaudí or Hundertwasser''.

''If it is true, the replica looks more muted. Compared with Gaudí, it has reserved forms, and with Friedrich Hundertwasser — the colour palette is more blurred and diluted,'' believes Gizatova.