Talia Minnullina on PPP in medicine: “Doctor, will I live? There is hope, but there is no chance!”

The problems of investors in the framework of public–private partnership (PPP) in medicine have been discussed in Kazan — the plenary discussion of Invest in Health forum, which was opened by the head of the Investment Development Agency of Tatarstan Talia Minullina, was devoted to this topic. The agency has several reasons for concern: investments in the health sector in Tatarstan account for less than 1% of the total volume of private foreign injections. In Russia in general, the Federal law 224 on PPP, adopted back in 2015, gave healthcare 100 billion of investments for the whole country in a year. The discussion with industry experts revealed a number of problems hindering PPP in medicine: imperfect line of CHI (Compulsory Health Insurance) tariffs, legislative flaws, the Soviet management system and even terminological deadlocks. Read more in the material of Realnoe Vremya.

The plenary session began with a video dedicated to the pressing problems of Russian healthcare: industry experts, medical students, practitioners and lawmakers were discussing the lack of equipment in conventional hospitals, the insufficient number of hospitals, labour migration, the improper distribution of public and private medicine and the difficulties of establishing the latter.

“Any object that comes to the market, and healthcare is still a certain market, causes competition. Of course, the PPP, which will come and will provide better medical services, will contribute to that the state clinic will increase the volume and improve the quality. Using the PPP mechanism, the state solves several issues — the creation of jobs, the provision of qualified medical care, examinations, which are not currently implemented in public clinics. Our entrepreneurs through the PPP receive a guaranteed order from the state for the provision of certain services,” Deputy of the Tatarstan State Council, Chairman of the Committee on Social Policy Svetlana Zakharova gently led up to the main topic of the forum.

Guzel Ulumbekova, the moderator of the meeting, head of the Association of Medical Societies for the Quality of Medical Care and Medical Education, who was invited from the capital, gave the first floor to the head of the Investment Development Agency of Tatarstan, inviting her to answer the question: what makes investors wary of the health care sector and what moments they are most concerned about? Investors ask the same questions, Talia Minnullina stressed. They are interested in the presence of English law, the institution and forms of PPP, the availability of subsidies and tax benefits, ways and possibilities of registration of land plots.

“Attracting private investors to the healthcare sector today is a very difficult issue. They understand that the Russian market is not so easy to enter. If you look at the share of foreign private investors in the total volume of investments that come to Tatarstan, then less than 1% goes to medicine. The social sphere for investors is not so attractive — very long-term money, as a rule, are cheap money. Banks, funds are ready to join such projects, but private investors... Only if some very large corporations, and even then, probablyif commanded. There is a famous anecdote: “Doctor, will I live? There is hope, but there is no chance.” I hope with investors we have not only hope but also some chances in our market will appear,” said the head of the Tatarstan Investment Development Agency.

At the same time, Asian companies — Japanese, Korean and Chinese investors — are showing great interest in Russian healthcare, Minullina added. Even taking into account the huge empty niche in the segments of pharmaceuticals and medical equipment, there are no investments in the health sector at the moment in the republic. Mostly, private foreign investments continue to go to the manufacturing industry, the work has begun in the IT sector, agriculture, petrochemistry, mechanical engineering — the traditionally basic industries of Tatarstan.

After the report of the Tatarstan Investment Development Agency Guzel Ulumbekova invited all participants of the forum — about 200 representatives of ministries and departments of Tatarstan, private and public clinics, delegates from the medical community — to participate in an interactive survey: do regions have reserves, that is, money from the population and budgets, to attract investors to PPP projects in health care?

Only 49,4% of those present voted in favour, that is, they believe that the regions have reserves to attract investors to medicine. Respectively, 50,6% voted negatively, which caused undisguised surprise of the speakers of the forum.

The next block of discussion was devoted to the Federal law No. 224 on PPP and municipal-private partnership adopted in 2015. The moderator of the meeting invited Maksim Tkachenko, the executive director of the National Centre for PPP Development, who took part in the development of the law, to assess the four-year work. “How much money has come to healthcare over this period? Here I personally heard that little — within PPP projects. Why?” asked the moderator.

Tkachenko for a start suggested to remember that that FZ-224 was being considered for 5 years, and during this time its relevance considerably decreased. Its initial task was to solve the problem of two “extreme” types of projects. The first type — the projects in which there are no budgetary funds, but there is a state property, which the investor subsequently takes away as property. Previously, this format would have been implemented through a competition for land plot, which again was limited by the Land Code. The second “extreme” were the projects in which the only source of return on investment could be the budget, without targeted operation, for example, if the investor builds a polyclinic and only technically serves it.

While the bill, designed at the federal level to legitimize regional projects, which had been previously prevented either by concession or regional legislation, was being under discussion in the State Duma, the concession legislation itself changed, removing many barriers. Besides, “mutual contradiction of these two types of projects”, as Tkachenko expressed, “spoiled” the bill, “Such a crazy quilt turned out.” For the first category of projects — it is too complex in terms of executive procedures, the second — did not fit the criteria for assessing the effectiveness.”

The “mutual contradiction of these two types of projects”, as Tkachenko expressed, “spoiled” the bill, “Such a crazy quilt turned out.”

Despite all the difficulties of the PPP law, 157 projects are currently being implemented in the healthcare sector under the agreements concluded in Russia. In them — almost 100 billion are “contracted” private investments, said the executive director of the National Centre for PPP Development. It is curious that the average term of PPP projects, according to Tkachenko, in healthcare is 10 years longer than the average term of all PPP projects in Russia, and it is in healthcare where a large share of the initiative of businesses themselves about the launch is noted.

“We have already discussed a lot today, but mostly we are talking about business participation in construction, equipment purchases, marking. I'd like to get you all back to health care. To date, there is no problem for private investors to enter the CHI programme, but there are other problems that can be divided into two parts: the problem for the state and the problem for businesses, stressed in his speech Boris Mendelevich, the deputy of the State Duma, head of the working group on legislative support and monitoring the implementation of the national project Healthcare.

According to the deputy, the main problem for the state is an imperfect system of tariffs, under which private investors go to the MHI programmes exclusively for liquid tariffs, leaving less profitable ones for state medical institutions. Since “the budget is limited” and it is impossible to raise all tariffs at once, Mendelevich proposed to “align” them by combining liquid tariffs with illiquid in one direction, which will be entirely either given to the private sector, or executed by state medical institutions.

Boris Mendelevich sees the main problem of private investors in the same system of compulsory health insurance, namely — in the financial reporting regulated by the law, which is identical both for businesses and for state medical clinics. The private investor cannot spend the earned money at own discretion and is compelled to invest them in those items of expenses that are included in the tariff. What, in his opinion, leads to the impossibility of purchasing equipment up to a certain amount. In addition, the tariff does not provide for profit at all, which, of course, pushes businesses to extract it from “other items”.

“When people come to us and say: ‘We do not have enough money, let's make a PPP’ — this is nonsense”

Representatives of large investors, which Talia Minullina mentioned, who are ready to invest in healthcare projects, look at PPP from a completely different angle. From the very beginning of his speech, Alexander Romanov, the executive director of VTB Capital's Infrastructure Finance Department, urged to resolve the terminological confusion and not to call private medical clinics as PPPs, stressing that they can hardly be called an example of partnership between the state and businesses. The expert hastened to dispel another common misconception, saying that it is impossible to use the PPP format, covering the lack of state funding with business money.

“I would like to say that PPP is not about money. This is a fundamental point. When people come to us and say: ‘We do not have enough money, let's make a PPP’ — this is nonsense. For one simple reason: the more you run out of money, the more you will have to pay in the future. And budget expenditures — the pressure on the regional, municipal budget — can be very large. Here I would agree with federal ministry of healthcare, which says that in this situation we do not need PPP.”

The PPP format, according to Alexander Romanov, is appropriate when the enterprise needs to be reorganized, and ultimately — the creation of a working business team.

Alexander Romanov stressed that for large investors, the healthcare market is currently closed, since the entire system of management of medical institutions, tied to the state, is unattractive for private capital.

“How can you negotiate with investors in this situation? I'm like in a frying pan”

The head of Tatarstan Investment Development Agency, Talia Minullina, was proposed to draw a line under the long emotional discussion, as to the initiator of the forum.

“The Investment Development Agency, which I lead, is a body of the state executive power. We are responsible for attracting investors to the economy of Tatarstan and, as a consequence, Russia. How can you negotiate with investors in this situation? Can you imagine my condition, what questions I answer? I'm sitting next to them like in a frying pan and I can't really answer any questions related to long-term budget planning, return on investment, specific financial models, and the government's request for specific private services. It's just impossible,” she said. “That’s why have become the driver of this discussion…”

The head of the Investment Development Agency informed the guests of the conference about the intentions to influence those in whose power to solve problems and help the health sector in Russia, and consequently in Tatarstan, to become more attractive to investors, to solve personnel, management, organizational and legislative problems. At the end of the forum, a resolution will be created, which will be signed by all participants of the panel. Guzel Ulumbekova has already promised to direct the document to the federal ministry of healthcare and the government apparatus. 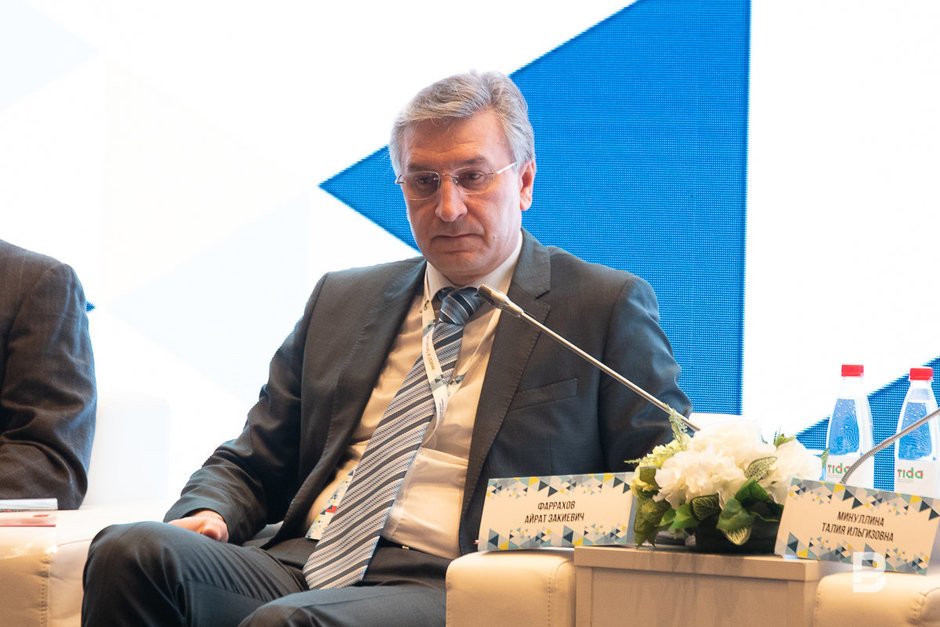