How is the programme designed to bring compatriots to Tatarstan from abroad is doing? What do representatives of Tatar diasporas ask the Tatarstan president? What's the difficulty in switching professional Russian sport from budget financing to sponsorship? How long will Orgsintez swimming pool be closed because of reconstruction? Why make Tatarstan professional athletes be dependent on salary? What are the prospects of hosting the European Games in Kazan? Deputy of the 7th Russian State Duma, President of Sintez water sports club Irek Zinnurov answered these and other questions at Realnoe Vremya's online conference.

The state programme Help to Voluntary Resettlement of Compatriots Living Abroad to the Republic of Tatarstan whose implementation began in 2017 was adopted in Tatarstan two years ago. Irek Zinnurov who raised the topic of resettlement of our compatriots to the homeland and the simplification of the procedure of obtaining Russian citizenship at the online conference highly appreciated it and shared interesting numbers.

''Over 400 our compatriots (as well as over 700 their family members) managed to use this programme last year. Its financing is divided into both federal and regional. At the federal level, people receive help with moving (travel, transportation of things, one-time help equal to about 20,000 rubles and so), at the regional level, help is offered on the spot (medical certificates, payment of 50% of rented temporary flat). That's to say, our compatriots receive considerable help so that they will be able to move here,'' the speaker said.

According to our interlocutor, quite a big number of people move from CIS countries, especially from Ukraine and Middle Asia. In addition, we should consider that not everyone can use the programme – it allows highly qualified specialists to go back to the homeland and could benefit here. The programme was extended to 2019-2021 due to its high demand.

The talk about our compatriots living abroad couldn't help but lead to the topic of Tatar diasporas spread around the world. We should say Tatarstan actively works with these communities. 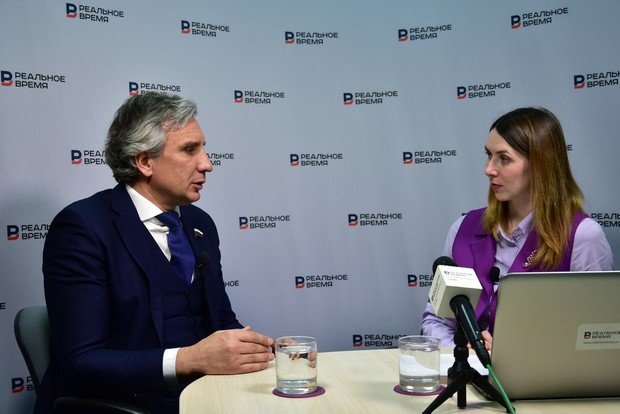 To have sponsors, some concessions to taxation or something else are needed anyway so that they will be interested in investing

''As for the work with our compatriots, I can probably note a good job done only in Moscow, Saint Petersburg and Tatarstan. Other regions work with compatriots a bit worse. Our president, Mr Minnikhanov, very often meets with our diasporas living abroad for a reason. I can say representatives of these communities sometimes speak Tatar better than people do here in Kazan,'' the speaker shared.

Our interlocutor specifies that diaspora representatives usually talk with the head of Tatarstan: ''They need help to hold events, they need help and need to be heard because they want to participate in Russia's life''.

''Athletes' salary is anyway must be tied to a result''

Discussing legislative initiatives in his area of expertise, Irek Zinnurov reminded that President of Russia Vladimir Putin had recently expressed a thought about the necessity to free the budget from state financing of professional sport. The head of the state thinks sponsors must invest in it. However, there is a serious obstacle here.

''To have sponsors, some concessions to taxation or something else are needed anyway so that they will be interested in investing. Legislative initiatives were proposed in this respect, particularly in a concessionary tax rate, zero income tax on children's sports schools. One of the initiatives is aimed at advertising: it's offered to divide advertising, roughly speaking, on the fence, on a sports building or on an athlete's uniform. That's to say, there must be mechanisms to allocate money flows to expand the mass sport,'' said Realnoe Vremya's interlocutor. I used to be an athlete and I know that when you enter elite sport you fully dedicate yourself to it. Of course, in such a situation a person must not be concerned about himself and his family

Zinnurov's speech at a session in the Tatarstan Ministry of Sport comes to mind here: he noted the importance of grants for athletes; however, his proposal was received by the public unambiguously. At the online conference, the deputy agreed to tell about his idea in detail.

''I was speaking about encouraging promising athletes who will participate at WCs and Olympics. It's important that elite sport is backed by grants in the republic so that athletes will receive a salary and won't think of escaping to another region and competing for it. I used to be an athlete and I know that when you enter elite sport you fully dedicate yourself to it. Of course, in such a situation, a person must not be concerned about himself and his family. But a salary is anyway tied to a result. At our club [Sintez], for instance, such a scheme is applied. We work on it, but it takes time. I think we will come to it anyway,'' the speaker concluded.

''The swimming pool will probably close for reconstruction in summer''

As for the already mentioned Sintez, it experienced a serious reform last year. According to Irek Zinnurov, he had such an initiative in his mind for long.

''It's good that TAIF GC and Kazanorgsintez supported this initiative. It's support of elite sport: the same swimmers, divers must see a goal and have a financial incentive in the end. We extended our club from water polo players to swimmers and divers. It's great when an athlete doesn't think of how to exist. Support of athletes is probably the most important thing. To support and give a chance to show a result. Moreover, now they have an opportunity to represent Tatarstan at the Olympic Games,'' our interlocutor said.

Still talking about representing our republic in international competitions, we couldn't help but ask Zinnurov how he assessed diver Nikita Shleikher's prospects.

''As he is a member of our club, I keep an eye on him. I see he is moving from one side to another in terms of results. The most important thing he ride the crest by the major competitions of the season. I think he has all the chances for it. Of course, we wait for a gold from him, not only at the WC but also at the Olympic Games,'' the speaker claimed. As for the 45 th anniversary, I can say we will dedicate a game against Dynamo Astrakhan to this milestone, on 23 March, on Saturday. We want to hold small events before the competition and during the game

The deputy also told how the upcoming 45 th anniversary of Orgsintez swimming pool would be celebrated and shared current results of its improvement.

''As for the 45 th anniversary, I can say we will dedicate a game against Dynamo Astrakhan to this milestone, on 23 March, on Saturday. We want to hold small events before the competition and during the game,'' the speaker said.

''As for the improvement of the swimming pool, it's impossible to finish it, as probably any repair. Step-by-step reconstruction will be carried out. But it's half the battle: we installed new ventilation last year, the façade changed, new windows were installed. Side walls and illumination are planned to be repaired this year. The swimming pool will probably close for reconstruction in summer.''

''First of all, children shouldn't suffer in any situation''

This January, Kazan submitted an application to host the 2023 European Games. Irek Zinnurov is sure that the Tatarstan capital will be able to host not only European but also Olympic Games: ''The sports groundwork we laid has demonstrated many times that we can host and hold competitions at a high level. Some new venues will probably appear because of the games in the city – our directorate will decide. But we will unlikely have to do something more for water sports.''

Sports schools are another hot-button issues for Kazan, particularly an unclear situation with Delta Olympic reserve school for children and youth – its financing became a topic for debate between Kazanorgsintez PJSC and the Committee for Physical Culture and Sport of the city's executive committee. The guest of our online conference agreed to comment on the matter.

''First of all, children shouldn't suffer in any situation. But it turned out the school belong to the sports committee. It doesn't have enough money and is spread among different swimming pools. I received related requests and I, in turn, turned to the sports committee, then to KOS and talked with the school's director. I hope there will be found a solution between them,'' Irek Zinnurov said.

By the way, the deputy himself has recently offered to follow Yekaterina Gamova's experience in opening sports schools: ''They invited a good specialist, the best athletes from all Russia came to him. Now the coach has almost the whole second team of the country at his disposal. I also see a big advantage because the coach has an opportunity to train with the pupils not for 1-2 months but all year round. All sports need such preparation. Water polo certainly needs it – it would be a good opportunity for a big step forward. As for financial support, again, if business gets involved in it, it must have concessions. Otherwise, it's a state programme. If we prepare a national team member, it must be a state programme,'' the deputy concluded.