Rustam Minnikhanov to innovators: ''Much money should not be given to prevent you from going far away''

About how Nail Maganov advised Kazan inventors to be less ''mean''

The ''gold mine'' of Tatarstan's economy is starting to slightly dry up: Tatarstan enterprises of petrochemical complex showed growth of only 2,1% in the first half of the year, but surprised by generous tax revenues with an 18% increase. This became known at a meeting of the Board of Directors of Tatneftekhiminvestholding. However, in the centre of attention was the verbal ''duel'' of Director General of Tatneft Nail Maganov, who severely reprimanded the ex-partners of innovators: ''Guys, stop being mean!'' The correspondent of Realnoe Vremya watched the course of the conversation.

The July meeting of the board of directors was traditionally devoted to the preliminary results in the petrochemical complex of the Republic of Tatarstan for the first half of 2018. According to Director General of Tatneftekhiminvestholding Rafinat Yarullin, the industrial output increased by 2,1%. The total revenue of all enterprises in the industry exceeded 610 billion rubles, and tax payments increased by 18%.

Nizhnekamskneftekhim increased output by 1% in the first half of the year, Kazanorgsintez — kept at the level of the previous year. The growth was noted for medium-tonnage products, butyl and butadiene rubbers, polycarbonates.

According to Rafinat Yarullin, almost all chemical and petrochemical enterprises increased profits and revenues from sales. Contributions to the consolidated budget of the republic increased by 17%. Kazanorgsintez, Tatneft, Nizhnekamsktekhuglerod, KVART, residents of Khimgrad and Chemical Plant Karpov increased the payments.

At the same time, the increase in oil prices since the beginning of the year allowed to increase revenues in the production segment. In oil refining, despite the increase in prices, profits declined. The growth of profits is limited by high share of mazut in the commodity basket and the costs associated with the start-up and adjustment works at TAIF-NK Heavy Residue Conversion Complex. Nizhnekamskneftekhim increased output by 1% in the first half of the year, Kazanorgsintez — kept at the level of the previous year

Paradoxically, but at the same time, the advanced manufacturers continue to optimize the number of employees. Among those who downsize, there is again Nefis Cosmetics in Kazan, Chemical Plant Karpov in Mendeleevsk and KVART.

To make the picture complete, Rafinat Yarullin said that there are those who, on the contrary, expand the staff. According to him, now there is an increase in the number of employees in Tatneft, at its tire complex and Khimgrad. In petrochemistry, employers are struggling to attract qualified personnel. ''Due to the increased competition for labour resources and skills, wages are growing faster,'' he said, and the slides of the presentation featured salaries of more than 50,000 rubles. In the related chemical industry, the rate of wage growth lags behind the average Russian level, he complained. Moreover, in the sector of small enterprises on processing of plastics there is a decrease in official wage.

The main event for the oil industry was the announcement of the OPEC+ decision to increase oil production since July, as a result of which daily oil production in Russia is to grow to 200,000 barrels. Prior to that, 17,6 million tonnes were produced in Tatarstan, 14,6 million tonnes of which were produced by Tatneft. Super-viscous oil production increased by 29%. The scale of oil refining is expanding. TANECO refinery restored the processing of raw materials to the level of 2016 after the overhaul in 2017.

TANECO continues to increase production of light oil products. The production of base oils increased by 1,4 times. Last week, new units for kerosene and diesel fuel hydrotreatment were launched. The pilot operation of the system of early detection of deviations ELOU-AVT-7 has been started, the ''digital twin'' of the unit — at the stage of creation.

With the expansion of oil refining volumes and the start of production of own gasoline production at TANECO, Tatneft decided to invest in retail business. It invests more than 39 billion rubles in the development of this direction until 2025. It is planned to expand and modernize the filling station network, increase the daily turnover of filling stations, improve the quality of the trade offer, said Director General of Tatneftehiminvestholding JSC Rafinat Yarullin. To date, the company is the operator of 685 filling stations in Russia and CIS countries and plans to increase the sales capacity of its network of filling stations by 2,3 times. 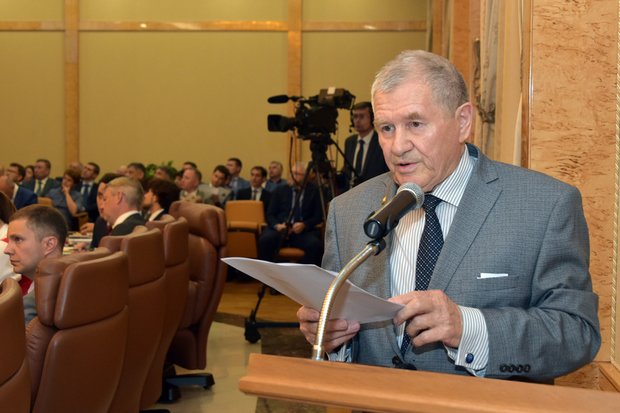 According to Rafinat Yarullin, almost all chemical and petrochemical enterprises increased profits and revenues from sales

For comparison, Rafinat Yarullin said that in the first half of the year the Russian industry grew by 3% in the processing industry. But at the end of the year, growth is expected to slow to 2,5%. According to forecasts of economists, in 2019 the results may worsen due to the increase in the tax burden and lower incomes. According to them, in 2019 the growth rate of the Russian economy will be only 2,1%, and wage growth — 0,8%. Exports will grow from $440 billion to $445 billion, and imports — from $275 billion to $290 billion. In 2017, the outflow of investments from Russia amounted to $11 billion.

In the condition of the recession, Rafinat Yarullin focused on the need to include Tatarstan projects in national support programmes. ''The Russia's development until 2024 will be carried out within the framework of national projects in 12 areas, including science, environment, small business, and exports. A number of projects need to be integrated into the national agenda. To develop foreign trade of regional enterprises, it is important to ensure the availability of new support measures for them,'' he stressed.

What to do with waste: China bans its import

The main barrier to the development of new industries can be toughening environmental requirements and waste processing, he believes. According to him, now the world market situation is exacerbated by this problem, as China banned the import of certain types of waste. Following China, such decisions are being worked out by Thailand, Vietnam and Malaysia.

In continuation of the conversation, the floor was given to Director General of ELP Group PLC Andrey Grachev, whose company has grown as a startup of the Kazan Technological University. He presented the technology of waste processing using the method of rapid pyrolysis, which is used at modular units. According to him, the company has independently developed and produced the pilot sample, which is now operated on industrial scale.

Grachev started the presentation with dry figures. ''The potential of biomass waste is huge: 200 billion tonnes of dry biomass is produced in the world, and in Tatarstan — 2 million tonnes are thrown away and not used.'' According to him, the unit can process 4,000-5,000 tonnes of waste per year at a capital cost of 30 million rubles. ''The unit is modular and does not require major construction work. It is automated: it allows two operators to manage the process,'' he listed the advantages. The essence of the process is that the raw material is heated and under the mechanical influence the liquid products and bio char are obtained, which can be used in various fields and even as fuel. ''We wanted to offer our solutions as a bridge between waste and petrochemistry,'' Andrey Grachev concluded. 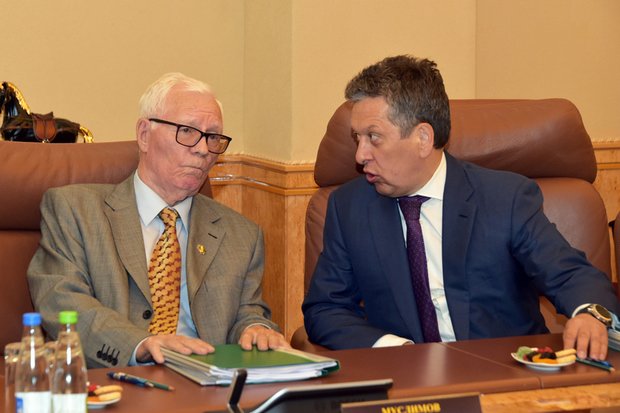 ''We left with the venture fund: we have a unit for 15,000 tonnes and in October it will be launched,'' Nail Maganov said

''Does it really pays off?'' Minnikhanov tricky asked again. ''So, all of us should go into this business?''

''Well, Tatneft is engaged in this, they have groundwork in this matter...'' Rafinat Yarullin ''passed'' to Tatneft. ''Yes, we were funded once, but now we have our own unit for 15,000 tonnes,'' Nail Maganov said evasively. ''But from the economic point of view, there is no certainty.'' After a couple of minutes, the head of Tatneft recalled that these technologies have been used for a long time — what is new in them? ''In woodworking it is called 'zhizhka','' he shared the historical knowledge. Later it became known that at the time Tatneft rejected this start-up, as the founders either did not want to give the know-how, or did not agree on the price. But the alliance broke. ''We left with the venture fund: we have a unit for 15,000 tonnes and in October it will be launched,'' Nail Maganov said.

''Yes, you have become expensive if customers are already turning away from you,'' Minnikhanov made a joke strictly and blamed: ''The first batch should be for free.'' ''This question is not to him, but to the venture fund,'' Maganov clarified.

But Dmitry Samarenkin, co-owner of the Kazan Oil Extraction Plant, had a positive case of cooperation with Grachev. ''For the last half a year, Andrey and I have been working out a by-product — husks from sunflower seeds. 180,000 tonnes we have! At the pilot unit, 20,000-30,000 tonnes were produced, the first product was obtained and we sold it to Tekhnonikol.''

''I agree, it should be developed, but a lot of money should not be given to you, so that you do not run far away,'' Minnikhanov concluded. But as soon as Andrey Grachev again mentioned the cooperation with Tatneft, Nail Maganov raised the ''red card'': ''Guys, we shall do everything at the proper time, stop being mean!'' he replied.

In conclusion, the president thanked all the participants for the interesting presentations.