Denis Matsuev has been ''In the Hall of the Mountain King''

The festival Denis Matsuev Visits Friends has opened in the Saydashev State Great Concert Hall in Kazan. The famous pianist amazed the audience in the first evening of the festival with many diverse emotions, traditionally surprising with fantastic technique. Read the details in the material of Realnoe Vremya.

Denis Matsuev, after whom the festival is named (the fest this year celebrates little but still anniversary — five years) appeared only in the second part. However, the audience did not complain. The first part of the fest was no less important and emotionally rich. It was given to the symphonic poem by Richard Strauss Don Quixote, in which the soloist was cellist Sergey Slovachevsky. It was the first performance of Don Quixote by Strauss in Kazan.

Slovachevsky is a graduate of the Saint Petersburg Conservatory, student of remarkable musicians, one of his teachers was Mstislav Rostropovich. He is a winner of many international competitions. Slovachevsky plays a unique instrument — Italian cello of the 18th century. The musician cooperates with top world orchestras and top conductors. 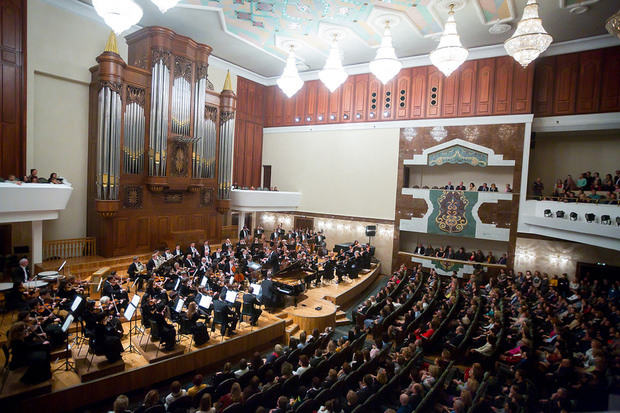 Denis Matsuev, after whom the festival is named, appeared only in the second part. However, the audience did not complain. Photo: Oleg Tikhonov

The basis of the symphonic poem by Richard Strauss is the great novel by Cervantes. With the language of music, the composer told the audience the story of the Knight of the Rueful Countenance — kind, naive, simple-minded, believing in human nature. He causes laughter and sympathy simultaneously. ''Fantastic variations on the theme of knightly character'' — so the composer characterized the genre.

The night dreams of Don Quixote, his dreams, fightings with windmills, the meeting with the village beauty, whom the knight mistakes for the beautiful lady, calling her Dulcinea, and, finally, death — all these story lines of the novel written by Cervantes, by the way, as a parody of chivalric novels but outgrown the parody, are present in the music by Strauss. The composer, by the way, also did not escape some kind of parody, being ironic in the music fabric of the symphonic poem of the tetralogy by Wagner.

During the performance there were two heroes on stage — the part of Don Quixote was gently and deeply sung by the soloist, and there was the narrator — the one who keeps all storylines with finger tips — Maestro Sladkovsky. The latter conducted in accordance with the mark of Richard Strauss — ''chivalrously and courteously''.

The finale of the symphonic poem, when the cello played solo, touched to tears: the Knight of the Rueful Countenance went to a better world, and he not just left — chivalry was gone from our crazy life.

The second part of the concert belonged to Denis Matsuev. As presenter of the concert Yulian Makarov told before the concert, Matsuev gives about 260 concerts a year, almost half of them — with symphony orchestras. Certainly, the pianist is very scrupulous in his choice and works only with worthy ensembles and conductors.

Denis Matsuev began quite traditionally — with Concerto No. 3 by Tchaikovsky. One of the latest works of the composer sounded deep and philosophical, the Tatarstan Symphony Orchestra in this context was a worthy member of the musical dialogue. As for the relationship of the soloist and the conductor, Matsuev and Sladkovsky have long felt subtly each other.

Then in the concert there began surprises. There were performed Variations on a Theme of Paganini by Witold Lutosławski, the basis of the work by the Polish composer is the famous beginning of the 24th Caprice for Solo Violin by Paganini. Denis Matsuev demonstrated fantastically masterful play, it seemed that the pianist's fingers did not touch the keys and the music appeared from nowhere. There was an impeccable artistry and courage.

The surprise number two was the performance by the orchestra and soloist of Piano Concerto by Rodion Shchedrin, the composer is not often heard in Kazan. He is complex, ambiguous, perhaps controversial in something. But, according to Yulian Makarov, once Matsuev performed Shchedrin's Piano Concerto, when in the audience there was the author himself with his wife, great ballerina Maya Plisetskaya. Matsuev was honoured with the praise from Shchedrin, who, as it is known, is an excellent pianist. Matsuev and Sladkovsky have long felt subtly each other. Photo: Oleg Tikhonov

''I wanted to give in the concert the crossroads of different musical styles,'' wrote about his work Rodion Shchedrin, giving three parts of the concert such names: Dialogues, Improvisation, Contrasts. Both the conductor and soloist clearly grasped these various stylistic nuances of the parts. The first part was a dialogue between orchestra, led by Maestro Sladkovsky, and Denis Matsuev. The second part was a brilliant improvisation. And finally, the third part was the most interesting.

Bell rumbles of the orchestra, reminiscent of chimes, piano fingers running on the keys, and suddenly — blues melody, jazz, relaxed, casual, stylish. And the conductor and the soloist basking in this freedom. The conductor at some point standed half-turned to the audience, and one could see his happy face — happiness from the feeling of freedom, air, flying.

Of course, Denis Matsuev gave an encore. To the great joy of many of his fans, he played one of his best-loved performances — In The Hall of the Mountain King by Edvard Grieg. Temperamentally and with a fair amount of courage as always.