Assumption Cathedral of Sviyazhsk ready to receive pilgrims and tourists

It will be open to the public already at Easter

In a week, pilgrims and tourists will have the opportunity to get to the famous Assumption Cathedral of the Virgin Assumption Monastery in Sviyazhsk. The temple, known all over the world by unique frescoes of the 16th century and listed among the UNESCO monuments, is almost ready — the long-term restoration has been completed. Realnoe Vremya correspondents were the first among the media representatives to visit the restored cathedral.

''Forests are about to be removed''

Sunny, bright day on Sviyazhsk shortly before Lazarus Saturday — snow-white temples and domes, sparkling in the sun, perfectly clean monastery yard of the Virgin Assumption Monastery, prepared for planting flowers lawns. On the Assumption Cathedral, which for many years was closed for restoration, one can still see the forests.

''From the restoration works in Sviyazhsky monastery, we have left to install icons on the 'kokoshniks' (architectural elements – editor’s note). You see, in the "kokoshniks", there are niches, there were icons, in the Soviet years they were lost, but, fortunately, pre-revolutionary photos and descriptions are preserved,'' Governor of the Holy Dormition Monastery, hegumen Simeon (Kulagin), explains.

According to him, new icons for the cathedral were painted by Moscow masters. Next week, the icons will be placed on the 'kokoshniks' and the woods will immediately be removed, they are now only needed for the installation of icons. ''We hope that on Resurrection of Jesus the Cathedral will already be open to the public,'' the governor says and clarifies that the services in it will not be performed yet, the church has not yet been consecrated.

In the summer, they plan to consecrate, the date will be appointed by Metropolitan Feofan of Kazan and Tatarstan. In general, given the special status of the monument, the services will be held infrequently and only in summer. In the warm period, it will be open for visits. At one time, the Assumption Church was built as a summer cathedral and there is no heating.

‘’We hope that on Resurrection of Jesus the Cathedral will already be open to the public,’’ says hegumen Simeon

The status of the Assumption Cathedral as a UNESCO monument dictates some restrictions when visiting — it is necessary for the preservation of frescoes, the visiting regulations are now being agreed with the committee for the protection of monuments. Preliminary, we can say that one group will be launched every half hour.

‘’Before pilgrims or tourists get to the cathedral, they will have to visit our Church Museum, where they will be told about the uniqueness of the frescoes restored thanks to the Vozrozhdenie Foundation, about the basics of the Orthodox faith and monastic life. After that, prepared people go to the Cathedral, where they will have enough time to look at this unique monument of world importance,’’ says hegumen Simeon.

Taking pictures in the cathedral will be allowed, but only without a flash — it can also damage the frescoes. Visiting both the museum and the cathedral will be free of charge — this is the position of the monastery. The cathedral, built in the 16th century, had long been in need of restoration, and it began in the 19th century, continued in the 20th century. But the most complete, historically based restoration of the Assumption Cathedral began only with the coming of the Vozrozhdenie Foundation on the island. It lasted almost 10 years. The best Moscow restorers were engaged in the restoration of the frescoes, one of them — foremost specialist Valery Kosushkin.

''Obviously, the frescoes were written by two masters''

The Assumption Cathedral of the Assumption Monastery was built in 1561 and has long been recognized as a masterpiece of Russian architecture. Its alleged architects — Postnik Yakovlev and Ivan Shiryai, the temple was created in the style of Pskov-Novgorod school. One of the main values of this temple is the frescoes covering an area of 1,080 square meters. The Assumption Cathedral — one of the two Russian churches, which preserved a full cycle of wall paintings of the times of Ivan the Terrible.

One of the main values of this temple is the frescoes covering an area of 1,080 square metres

Sviyazhsk frescoes are a world rarity. The most famous compositions include Holy Trinity Icon in the dome of the cathedral, The Assumption of the Virgin in the altar, The Crucified Christ on the Chest of the God of Sebaot, The Procession of the righteous to Paradise. There is a fresco, the plot of which can be seen only in Sviyazhsk, it is The St. Christopher.

It depicts St. Christopher in the apocryphal version with a horse's head. Nowhere in the world is there a fresco with this image of this Saint. According to legend, the Saint was very handsome and, to avoid temptations, asked God to disfigure him.

In the Assumption Cathedral, in addition to frescoes, fortunately, much has survived. There is a part of the plates — the ''native'' floor, survived the base of the iconostasis, icons from it are now stored in the State Museum of Tatarstan in the department of ancient art, and for the restored the copies are written. The temple amazes with its volume and scale of painting. There are fragments below that are lost, but they are so delicately included by restorers in the surface of the walls that this in some way creates an additional effect of antiquity, authenticity.

The temple amazes with its volume and scale of painting

''The most important thing in the Assumption Cathedral, which is why it is recognized as a monument of world importance — frescoes. They are written by unknown authors, but restorers distinguish two hands, obviously, two masters worked. Frescoes and the concept of the ensemble are amazing, here for the first time in Russian churches there were richly used subjects of the Old Testament and the gospel stories, almost all the stories of Scripture unfold here. Many experts even believe that the author of the concept of frescoes was Macarius, Metropolitan of Moscow, a very educated man for his time. He was the Confessor of Ivan the Terrible. The foundation of Sviyazhsk was important for the Tsar, from that time the formation of the multinational Russian state began. The Cathedral was built on the money of Ivan the Terrible and obviously not only under the supervision of local monks. The ideology of the painting of the Assumption Cathedral says that it is obviously a man extraordinary who made it,'' says Abbot Simeon.

It is possible to pay attention that restoration is carried out very delicately. The feeling of a replica, as it sometimes happens, is absent. Masters used tempera mineral paints, they last for many centuries and retain rich colours.

Naturally, after opening the Assumption Cathedral to the public, the flow of tourists will increase. ''We will have to restrain it, although we want to share this artistic and spiritual beauty. But we must preserve it for future generations,'' says father Simeon. 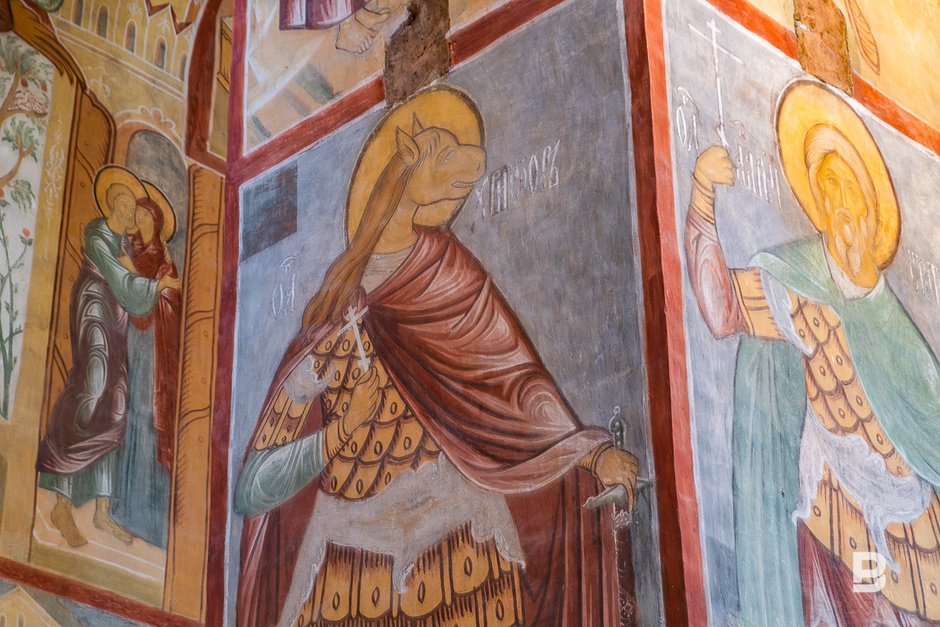 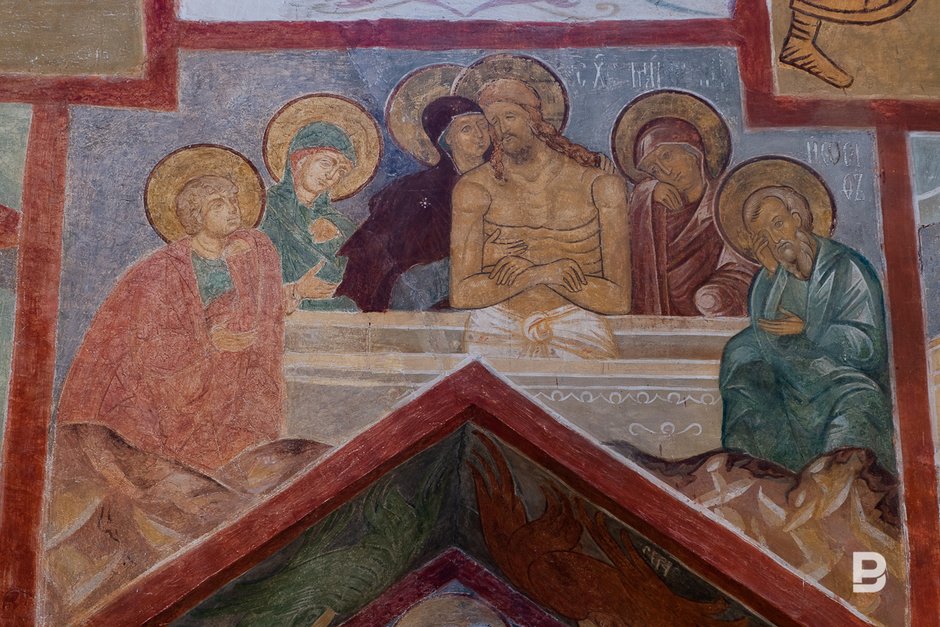