''US to do everything Assange received maximum sentence''

Expert in international affairs Dmitry Babich about the arrest of WikiLeaks founder: Lenin's decision, extradition to the US, vague statements of Kremlin and work with Russian media

Ecuador has withdrawn Julian Assange's asylum leading to his arrest. Now he is being in custody. Foreign affairs journalist Dmitry Babich believes that, despite some assurances of London, the Australian whistleblower will still be extradited to the United States, which prepared for him a ''secret indictment''. In the interview with Realnoe Vremya, the expert spoke about the reasons for such Ecuador's step, Kremlin's strange statements and Assange's work with Russian organizations.

''Assange has become a burden to the new president of Ecuador''

Assange received asylum under former president Rafael Correa. Correa was the president of left-wing views, criticized the US policy in America. The United States did not particularly harm him, it was not such a situation as with Venezuela. Ecuador is a small country, without significant natural resources, without huge ambitions. If the state seems to be a potentially strong rival to the US and the European Union (like Russia or China), the Americans do not forgive it even a small disengagement from Western ideology. And if the country is small like Ecuador, it is allowed to ''frolic'', and in any case they can move crush it even with a little finger.

Assange had been in the Ecuadorian Embassy since 2012, almost setting a world record for continuous stay in the territory of the diplomatic mission. Before him, by the way, there was a similar event associated with the Soviet Union. In 1956, when Soviet troops entered Hungary, József Cardinal Mindszenty, anti-Sovietly tuned, took refuge in the American Embassy in Budapest and stayed there until the beginning of 1970s — 15 years. If he had left the Embassy, he would had been arrested and placed in the Hungarian GULAG. But in the '70s, the relations between the Eastern bloc and the West improved slightly, there was the Détente, he was given a ride to the airport and fly to the United States. And then everything ended quite well.

But here the things are pretty bad. In Ecuador there came new President Lenin Moreno (May 24, 2017 – editor's note). But oen shouldn't be deceived by his name, it is the right-wing president (obviously, his parents adhered to the left beliefs). And Assange for Moreno was just a burden. The Ecuadorian government began to harass Julian in every way: it did not allow or severely limited his access to the Internet — and for him it is very painful, he is a specialist in cryptography on the Internet. It was evident that he was kept in poor conditions, he ate poorly. But Assange did not come out, though he seemed to be in no danger.

Now it is clear that Assange has been right all this time: all his suspicions have been confirmed. The Americans were telling that he was not charged, let him go, everything would be fine, they would handle everything. That's what the British government said. Even these two Swedish girls, who were obviously far-fetched and under pressure from the West accused him of rape, dropped their charges. The goal was to lure Assange out. Even the Ecuadorian government said: ''There is nothing to fear now, come out. The Swedes are no longer accusing you of anything.'' 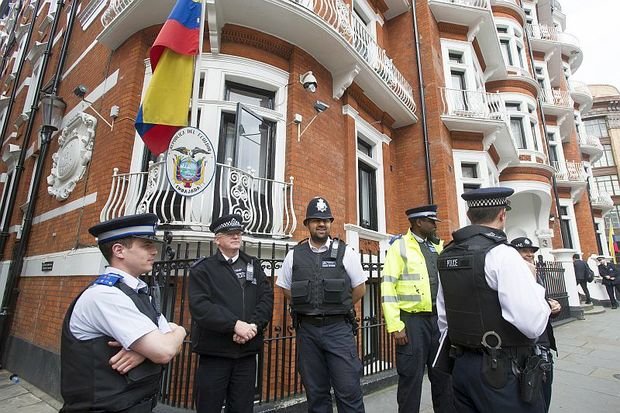 ''Ecuador is a small country, without significant natural resources, without huge ambitions. If the state seems to be a potentially strong rival to the US and the European Union (like Russia or China), the Americans do not forgive him even a small departure from Western ideology.'' Photo: tvc.ru

Assange replied that there were so-called ''sealed indictments'', which are laid in an envelope and sealed. And if it is possible to arrest a person, they suddenly get, and it turns out that the person is threatened with prosecution. The Americans said that there was no such ''sealed indictments''. But a few months ago, one of the American officials blurted out: ''Yes, by the way, we have a charge against him.'' And it got into The New York Times. It turned out that Assange must have had second sight.

So he's still facing extradition to the United States?

Most likely, these sealed indicators will be born, after which the extradition process will begin in the United States. And there Assange faces a difficult future, because he will be accused of theft of information. Allegedly because of his actions, American agents suffered because he published secret correspondence. Most likely, this is not so, because he published only the correspondence that relates to human rights violations, and not the names of the same US agents in Iraq. And he will be charged, the authorities will do everything to get him the maximum term.

''The Watergate is impossible in the Current American conditions''

Who in the West spoke in his defense?

Many people. For example, famous journalist Daniel Ellsberg is a man who published Pentagon papers in the 1970s, he is considered a classic of American journalism. And he says: ''If you accuse Assange of stealing information from the servers of the Democratic party of the United States, government agencies, then, by this logic, they should judge me: I stole the real papers of the Pentagon.''

The Assange case is heavily media-related, and among normal journalists it is considered bad form to ''roll a barrel at him''. Of course, there will be those who will roll anyway, quoting officials. This shows how much the American society has changed since the 1970s. Gone are many freedoms. It becomes clear that Watergate in the current American conditions is impossible. And those who reveal, like Assange, information similar to Watergate, are very much at risk, if not their lives as a result of a secret murder, then freedom, and for a very long time. In addition, they risk getting the strongest humiliation, as happened with Bradley Manning, Assange's partner.

What political forces support him?

On good terms, we should support him. He opposed the ideology of ultra-liberalism that permeates the Western society. The Western society is similar to the early Soviet: it's good slogans sound (protection of minorities, feminism, etc.), but they are brought to the point of absurdity and turn into a totalitarian parody of themselves. And it turns out that for the sake of elections or for the sake of feminism, you can kill people in Afghanistan, Iraq and other parts of the world.

Former Head of the U.S. Defense Department (from January 20, 2017 to January 1, 2019 –editor's note) James Mattis, who worked for Trump until recently, said, ''We killed a bunch of guys in Afghanistan who made women cover their faces. And killing them was a great pleasure for us.'' Of course, I opposed to force women to cover their faces. But to have the pleasure of killing people who were forced to comply with standards that are not very correct from a modern point of view is madness. And Assange opposed this ideology, which, in turn, is directed against us. The hostility of the West towards Russia and China is explained by the fact that they see us as potential opponents of the power of this ideology. Although our elites do not want to engage in ideology, do not believe in it. James Mattis, who worked for Trump until recently, said, ''We killed a bunch of guys in Afghanistan who made women cover their faces. And killing them was a great pleasure for us.'' Of course, I opposed to force women to cover their faces. But to have the pleasure of killing people who were forced to comply with standards that are not very correct from a modern point of view is madness.'' Photo: bbc.com

And in these circumstances, we need to support him. But we are going the other way: not to create a conflict where it can not be created. Press Secretary of the President Dmitry Peskov said a strange phrase: ''We hope that his rights will be respected.'' You're hopeless. They will not observe them. It's like hoping that the Bolsheviks in 1918 would give lawyers to the Tsar, generals, and these lawyers would win the process.

So it is here: there will be no justice. We must be aware and resist. But our elites are not willing to go for it. No matter you want to fight or not, you will be fought. The idea of ''sit out, wait out while others fight'' will not work out. And the Kremlin, judging by the latest movements, will try to implement it. They will speak on official Western channels: they will address to Reporters Without Borders, probably, our journalists will make some statements about solidarity. But it's not a fight. To fight inside those organizations, which are controlled by your opponent — it means to surrender. It is necessary to fight through the organizations, creating them. The Soviet Union, for example, was not eager to join the International Federation of Journalists. We cannot rely on the institutions controlled by the West.

''Moscow is trying to make peace with Washington, not to expose it''

You personally did have a chance to chat with Assange?

No. Only during public teleconferences and videoconferences I asked him my questions, but it was not in personal contact.

He is suspected of working for the Russian special services, there were talks about connections with ''Russian hackers''. Are there grounds for such suspicions?

Of course, not. Assange is an Internet activist. He lived in Australia. He had a divorce, he was taken the baby away. He began to fight, defending his father's rights. And he failed. But he saw many violations, different dishonest things. He was a master of penetration into all sorts of networks, began to spread everything that was there. This had an effect, he had supporters, not necessarily deceived fathers. And so there developed an international group of his followers — so WikiLeaks was created. There were almost no Russians there. ''Assange is an Internet activist. He lived in Australia. He had a divorce, he was taken the baby away. He began to fight, defending his father's rights. And he failed.'' Photo: tvc.ru

Russian security services then sat quietly, and now they do not want to quarrel with the West, and then certainly did not want to spoil relations. Russia swallowed the invasion of Iraq, almost did not protest. And Assange became famous for the fact that he began to investigate and show videos of the Iraqi war. At that time, relations between Russia and the United States were not in the same state as they are now. Moscow is still trying to make peace with Washington, and not trying to expose it somehow.

Assange had a project on Russia Today, the World Tomorrow. Has he worked with the Russian media besides it?

Russia Today, if you pay attention, tries to give the floor to the Western dissenters more. There are actually a few Russians playing there. He saw RT as an opportunity to say something on the TV channel, not just on the Internet. For example, he interviewed Hezbollah leader Sheikh Nasrallah. And he was interested. Who else could give him such an opportunity? I think it was a tribune for Assange, not an attempt to use him.