'There was no panic to the news about the fall of the lira in Turkey. Most people have nothing to save'

The US have doubled the duties on steel and aluminum from Turkey, after which the national currency fell sharply against the dollar. President Recep Tayyip Erdoğan has already called the incident ''an insidious political conspiracy'', but as a protest the patriotic residents of Turkey began to make videos, in which they mocked at dollar bills in every way. Expert on Turkey in the Russian Council on International Affairs Timur Akhmetov gives a detailed description of the causes of the devaluation of the Turkish lira, the reaction of the authorities and local residents, in the column written for Realnoe Vremya.

The hottest days in Turkey fall on the beginning of August, but this year August has become a test for the Turkish lira. Over the year, the national currency has managed to lose 40% of its value against the dollar. The recent fall of the lira in the first decade of August has taken place against the backdrop of a serious diplomatic conflict between Turkey and the United States. At the centre of the scandal is the fate of Christian American pastor Andrew Branson, accused by Turkey of the links with terrorist organizations. The trial of the pastor has been going since 2016, and only at the end of July this year the local court decided to transfer the accused under house arrest.

The US president repeatedly applied the Turkish leadership for the release of Branson. In turn, the Turkish government tried to play the pastor card in exchange for a number of concessions in the court case against the Turkish state bank Halkbank, to which the US authorities are about to make a huge fine of 49 billion dollars for helping the Iranian regime to bypass the US sanctions in 2012-2013.

Donald Trump insisted that the official charges against the pastor were far-fetched, and this was clearly considered in Ankara as an attack against the judicial authorities of the state, as a hint of politicization of the courts. It is not easy to bargain with the Turks, and at some point the US leadership ran out of patience. At the end of July, Turkey was given the ultimatum: the release of the pastor or sanctions. 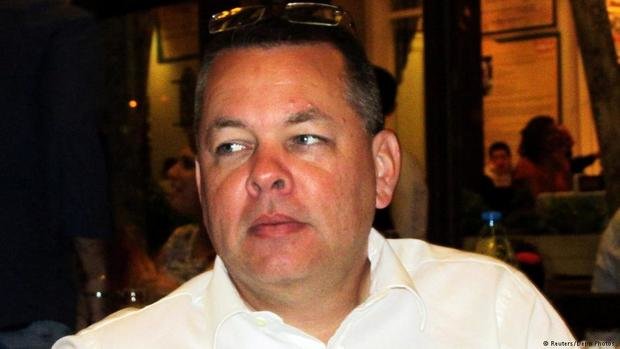 At the centre of the scandal is the fate of Christian American pastor Andrew Branson, accused by Turkey of the links with terrorist organizations. Photo: dw.com

The Turkish government clearly could not release the pastor-missionary — the flywheel of nationalism mixed with populist attacks against the United States had long been spinned. The language of ultimatums was doomed to cause the opposite effect on such a principled politician as Erdoğan. As a result, Turkey and the United States mutually imposed personal sanctions against a number of officials, as well as increased customs duties on imports of goods.

''This state is used to living beyond its means''

The escalation of Turkey's political conflict with the world's largest economy alarmed the investors. The cause of the concern for the stability of the Turkish economy laid in Turkey's vulnerability to global speculative attacks: the state is used to living beyond its means. With the advent of the Justice and Development Party to power in 2002, the government paid less attention than necessary to the development of local production while stimulating consumption.

Turkish producers, as well as exporting companies, are forced to import raw materials using funds from external sources. There is no free money in the country. The economic model of development led to high levels of consumption with a low resource base of the country and high debt of the non-state sector to external creditors.

People react differently to the fall in the lira rate. An important role is played by the presence of citizens of funds that potentially need to be saved from depreciation. However, the situation is affected by the attitude (read — trust) to the current government. The Turks are great patriots, while excessive patriotism does not always allow them to adequately assess the situation in the country. You can often hear the opinion that if a person buys bread (traditionally the price of bread served in Turkey as one of the indicators of the economic situation in the country) in liras then why he needs to worry about the increase in the value of the dollar… The Turks are great patriots, while excessive patriotism does not always allow them to adequately assess the situation in the country. Photo: ntv.ru

Such people naively see Turkey as a self-sufficient power. But this is far from the case. The share of imports in the production of agricultural fertilizers in Turkey is 80-90%, the production of agricultural machinery depends on the import of components, and they account for at least 50%. On the other hand, Turkish farmers borrow from banks, which in turn are forced to borrow abroad. The situation could be corrected by labour productivity in agriculture, however, and here the situation looks depressing: with the share of 7% of GDP, it attracts 19% of the labour force in the country.

Even at the very high of the news of the fall of the lira and the possible closure of a number of banks in the country there was no mass panic. The reason is simple – most people have nothing to save. If in 2002 the volume of consumer loans in Turkey was at the level of 6,5 billion liras, then in 2018 the amount was 500 billion liras. The share of loans of citizens accounts for a quarter of all debts of the banking sector. With the deterioration of the economic situation, people hope for a partial amnesty of credit debts.

Another important point is the dominant influence of the government and pro-government circles on the formation of public opinion. If the president says that the reason for the fall in the value of the lira is the conspiracy of external forces against Turkey, then to say otherwise means to raise suspicion of disloyalty to the Turkish nation. Particularly zealous patriots defiantly purchase from banks liras as a sign of solidarity in the confrontation with the United States. The resilience of the Turkish economy to external fluctuations, attacks of speculators and even political pressure from the United States still largely depends on the actions of the Turkish government. Photo: kelana.ru

Further steps will depend on whether the economy and more rational spending will have a negative impact on the positions of political power in the country. The decisive factor will be the ability of the Turkish government to present measures of ''belt-tightening'' to ordinary citizens as part of the fight against external enemies.