''I do not believe in scary stories about unemployment''

The main event of the conference, which excited everyone, was the final plenary session ''Digital cooperation. New opportunities for cooperation between the state and businesses'', where the ideologists of digitalization moved away from the main topic and answered a simple and urgent question — what competencies should a person have to ''survive'' in the digital environment? This funny blitz poll was specially provoked by moderator Tina Kandelaki, who said during the session that the person may have to work more — people worked until it was light before the electrification. ''Do not worry: those who did not work, they will continue not to work either,'' Rustam Minnikhanov warned to the audience's laughter. What answers were given seriously by the president of Tatarstan, founder of Innopolis Nikolay Nikiforov and others — read in the report of Realnoe Vremya.

Nikolay Nikiforov in the native land

The president of Tatarstan arrived at the forum CIPR 2018, held in Innopolis, on the final day. It would seem that the ''cream'' of CIPR had already been skimmed off, the inflammatory speeches of VIP speakers were already behind, and the exhibition was ready to dismantle. But it was not. By the arrival of the president, the CIPR gained a second wind, and together with Rustam Minnikhanov, its founder, ex-minister of communications and mass media of the Russian Federation and Chairman of the Supervisory Board of Innopolis University Nikolay Nikiforov, came to the forum. He could not miss it and is not going to do so in the future. In a conversation with the Realnoe Vremya correspondent, he denied information about his transition to Rostec to the position of the head of the radio-electronic cluster, making it clear that he would remain in the industry. He compared the importance of CIPR for IT industry with the Petersburg Economic Forum, where economic policy is determined.

''Last year we managed to 'glue' the first version of the programme ''Digital economy,'' he reminded. ''And Innopolis itself remains the highest paid city in Tatarstan.'' Later, at a plenary session, he once again returned to his child, saying that 99% of graduates of the Innopolis University are employed. And Nikiforov himself does not leave ''the native land'', having registered there two high-tech companies. The main speakers of the plenary session ''Digital cooperation. New opportunities for cooperation between the state and business'' was made by Rustam Minnikhanov, Program Leader for Russia Federation at World Bank Group Christopher Miller and others

Digital cards instead of a person

The main speakers of the plenary session ''Digital cooperation. New opportunities for cooperation between the state and business'' was made by Rustam Minnikhanov, Program Leader for Russia Federation at World Bank Group Christopher Miller, Chairman of the Supervisory Council of Innopolis University Nikolay Nikiforov, HSE Vice President Igor Agamirzyan, head of the concern Avtomatika Sergey Sakhnenko.

To begin with, the moderator tried to compare the profitability of digitalization of the economy of the Russian Federation and foreign countries with different levels of economic development. Surprisingly, in all cases the same result was obtained — Russia lags behind not only the US and Germany, but also Singapore, China and South Korea. Although over the past five years, the digital economy has grown fivefold and amounts to 4,3 trillion rubles, which is 5% of GDP, but we are still behind. In Japan and South Korea the contribution of digitalization in GDP — 10%, said Kandelaki. According to the presenter, only digitalization will save our society in the coming demographic pitfall, which awaits Russia in 2036. ''Digital cards will be an important asset in helping people,'' she said. However, for this it is already necessary to correct the digital inequality between the regions. But will it lead to GDP growth? Kandelaki predicts that by 2025 the volume of digital economy will grow to 8,9 trillion rubles.

Digital infrastructure – to medicine and transport

Interesting conclusions were made by the organizers of the forum, asking the views of the participants of CIPR about what industries should be a priority for digitalization. The organizers organized feedback in order to find out what was most interesting at the forum in order to develop future documents for the national project ''Digital economy'': the road map and development strategy. The survey involved 1,800 people, or 23% of the total number of participants. Deputy Director of Rostec Olga Kiriy said that the majority of respondents believe that public administration should be transformed into a full-fledged digital platform, and the digital infrastructure should be in two areas — healthcare and transport. Good prospects are in housing and urban planning. When choosing a communication platform of security, it is better to rely on domestic developers. The engine of all the processes of digitalization have to be only business. The controversial answers were given to the question, ''Should personal data be available to everyone on social networks?'' The majority responded in the affirmative. ''We need to come to terms with the idea that in the digital environment you live with no privacy,'' said Aleksandr Kabakov, the vice president for special projects at Mail.ru Group.

Out of 110 projects presented at CIPR 2018, the participants gave an absolute number of votes to the Rubicon project, which helps to detect cancer in humans with the help of artificial intelligence. 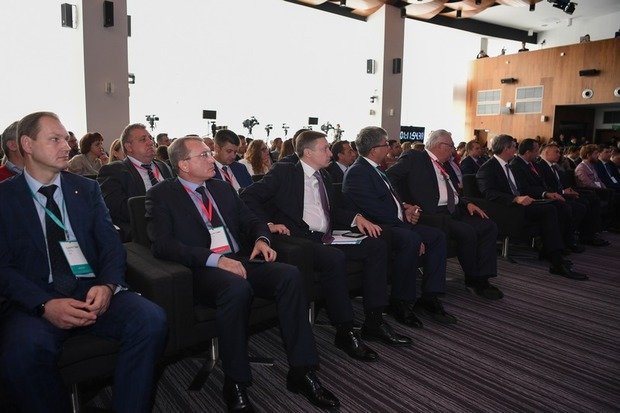 Tina Kandelaki gradually led speakers to universal topics. ''Before the electrification, people worked as long as light. Can it happen that in the digital age we will have to work more and more?'' she asked the speakers. ''Don't worry: those who didn't work, they will continue not to work either,'' the Tatarstan president answered, after which the rest had nothing to add. Then the moderator invited speakers to take turns to answer a practical question: ''What competencies should a person have to ''survive'' in the digital environment?''

''Nothing dramatic will happen, I do not believe in all these stories with unemployment,'' Nikolay Nikiforov responded. ''It will be a soft, comfortable transition. Of course, we will work more with information, this is an opportunity for continuous training. We will become more intellectually oriented creatures, or something,'' he said. In his opinion, people can even have more time for rest and family.