The new ethno-cultural festival brings together masters, artists and connoisseurs of folk crafts and art in one holiday

The first international ethno-cultural festival Aga-Bazar was held in the Bolgar Museum-Reserve on July 3. The “senior, main market”, as local historians call it, was located there in the 12-14th centuries and was not only a place of brisk trade, meeting merchants from Europe and Asia, but also a cultural centre. The calendar of the modern life of Great Bolgar has been added with another interesting date. The organisers hope that the festival will become permanent. Where to find the reconstruction of ancient jewellery in the craft rows, whether it is easy to learn to play the vargan, and why double-humped camels will move from Central Asia to Russia — read in the report of Realnoe Vremya.

What games the bazar-bash played

The “Oriental Bazaar” is the central point of attraction of the entire festival. It is the trading stalls — handicraft and gastronomic — that are the first to welcome guests. Researcher of the Bolgar Museum-Reserve Renat Vagapov (also bazar-bash [chief] of the festival) says: about 600 participants came from all over the country (but mainly from the Volga Region). About 70 of them are craftsmen who present their products. The holiday gathered at least 4,000 guests.

“In addition to brisk trading, one can take part in master classes — for example, ancient games. Today, in the Uen Fest tent, I've discovered the European game 'quarta', which develops logical thinking and imagination. Come back another time — I'll teach you how to play alkerk, an Arabic medieval game like checkers — we have a lot of holidays. There are no gastronomic master classes today, but our participants are actively introducing the guests to their products," Vagapov said.

The bazar-bash promised that there would be no cheap Chinese products in the trading stalls, but there would be unique items and handmade products in abundance. Indeed, producers offered halva and pastila, honey and propolis. According to the participants themselves, they did not have to pay for a place in the bazar, and the organisers themselves provided them with a trading tent and counters. There were also original shops: for example, one could taste Udmurt hot perepechs, which are prepared on an open fire. Therefore, the chefs brought it with them... a mobile oven!

An attractive place, surprisingly, was the point where they taught to brew fireweeds — according to the original and only rule. Yevgenia Tereshina, a craftswoman from the Yelabuga district, said that two families (her and her daughter's) moved to the village from the cities to open their own farm. At the same time, they took up the collection and production of fireweeds, even organised such a festival — this year it will be held on July 24 in the village of Novaya Anzirka, Yelabuga district.

“The peculiarity of the infusion of fireweeds is that there is no caffeine in it, so it is useful even for pregnant women, the elderly. After all, the secret is in the consistency: if you brew it strongly — it soothes, weaker — it invigorates. Leaf should first be prepared — grounded on a special board with a thread in a special container turned upside down. We offer to do this to the guests of the festival, mainly men — it takes a lot of effort. Then we brew fermented fireweeds in this way. Before the revolution, such drink was especially recommended to soldiers — as a restorative and prolonging the life," the craftswoman shared her secrets.

“All the accessories in my store are made of plastic, sometimes we add stones. They are very big, but such a material makes them lighter and cheaper. This is why they are called replicas. True reconstructions of jewellery are top-class jewellery art, their price reaches 10,000 rubles. If such pieces of jewellery appear at an auction, they are quickly purchased because connoisseurs know that it won’t be possible to get such a lot soon. But our reconstructions can be seen at Aga Bazar anyway — in the National Courtyard where representatives of different ethnicities show their special national values, from costumes to meals.”

How will your Jew’s harp sound?

The central stage was located directly behind the stores. The first Aga Bazar officially opened there. Vice head of Spas District of Tatarstan Sergey Tyunev and Director of Bolgar Museum-Reserve Ramil Ziganshin did it. Both hoped that the festival would become annual and get bigger year after year.

The main meaning of the festival is that the culture of different but neighbouring ethnicities is present here. Everybody showed their art on three stages of Aga Bazar — concerts didn’t stop, spectators just rushed from one inviting melody to another lively dance. Musicians demonstrated rare folk instruments, while Jew’s harp could be purchased. So Dalila Shaymardanova (Your Cosmos workshop, Kazan) offered different harps from steel and brass alloy at the Oriental Bazar:

There is a camel farm outside the reserve, but only half-a-year-old Vasya camel calf arrived at the festival. As Director of the family farm Artyom Kirichenko said, the two-humped baby is here for exhibition. It cannot be even fed, not to mention riding:

“We don’t let anybody ride the animals even on the farm, which is located behind the chak-chak museum and consists of 38 camels. The case is that this reduces their life very much. We can offer our guests camel milk, woollen goods but we won’t let them ride the animals. This is why our animals live to see 50-70 years. I will note that a two-humped camel, or Bactrian camel, is going to be on the Red List. They mainly live in Central Asia and people got used to consuming them. They have eaten all of them, to put it simply. So I will be only happy if they migrate from deserts and steppes of our neighbours to Russia’s vast areas. It is a very peaceful animal, communicative, it won’t attack a person first,” the farmer believes.

By the way, not only camels welcomed Aga Bazar guests. A resident of Bolgar who modestly decided not to introduce himself brought one of his horses he breeds for pleasure. It is a true diamond — a Standardbred named Colombina. Experts call such horses “a distinctive prize-winning horse.” A strong and quite big horse immediately draws the attention of those who are not indifferent to animals. The horse breeder permitted taking photos with the horse and let people ride her gratis. However, Colombina herself was alarmed a bit. Perhaps, she was simply coquettish. As her owner explained, a male horse is nearby, she wants to attract him.

While some guests of the festival visited stores, others enjoyed artists’ performances. National costumes of Tatars and Russians, Chuvash people and Mordvins, Maris and Udmurts, songs and dances alternated each other. A big concert with artists from IsTElek art union took place on the main stage in the evening. Various bands and many other folk fusion and electronic music virtuoso artists performed there. A heavy rain tried to stop the guests and close the festival at midday, but the guests found shelter in cafes and tea houses, and the laughter and songs sounded with a new force after the rain. 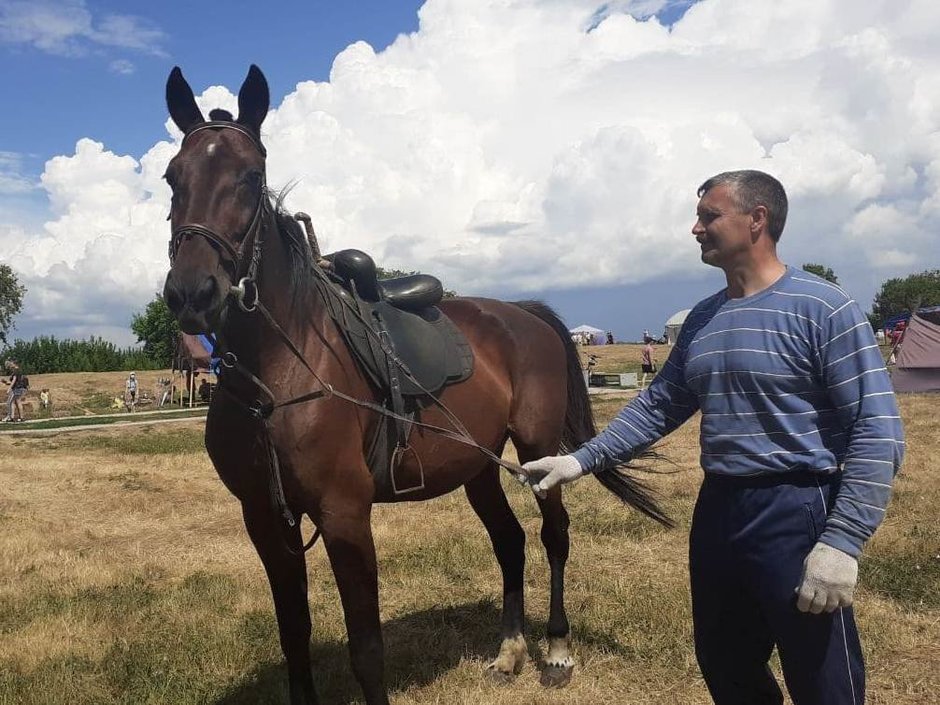