Protests on 12 June: ''oprichnik day'', failure of the capital city and regional compromise

Anti-corruption rallies took place in Russia on 12 June. In Moscow, the action ended with the detention of more than 800 people, including of Alexei Navalny. The authorities of Kazan, despite the special regime due to the Confederations Cup, agreed the meeting but relocated it to Yudino at 7 a.m. Despite mass arrests in Moscow at the unauthorized meeting, political analysts say that the authorities managed to minimize negative effects.

On 12 June, Russia Day, demonstrations against corruption took place in dozens of Russian cities. Similar meetings had already taken place in the country on 26 March of this year. Then the reason for the rallies was the film made by the Anti-Corruption Foundation (FBK) of Alexei Navalny about Dmitry Medvedev He is Not Dimon To You telling about the alleged corruption schemes involving the prime minister. The spring protests ended with mass detentions, but Alexei Navalny urged again to take to the streets on Russia Day.

Based on the data provided on FBK's official page — ''Navalny Team'', the protest meetings were planned to organize in more than 200 cities of Russia and in 18 cities abroad. According to Vedomosti, the meetings were agreed in 117 cities.

Initially, the meeting on 12 June in Moscow was agreed with the authorities. The meeting was planned to be on Sakharov Avenue. However, on 11 June in the evening, FBK posted a video where Alexei Navalny said that the rental companies under pressure from outside refused to install the stage and sound on Sakharov Avenue. In this regard, he urged the citizens to go out on Tverskaya Street, where the meeting was not agreed. Moreover, the preparations for a large-scale historical reconstruction were underway on Tverskaya Street at that time, and such transfer would seriously complicate the festival organisation. Besides, the preparations for the festical caused a curious rumour in the social networks. So, Facebook users mistook the decorations prepared long before the message of Navalny about the transfer of the rally on Tverskaya street for barricades against the march of Navalny. Initially, the meeting in Moscow on 12 June was agreed with the authorities. Photo: Aleksandr Utkin (meduza.io)

Navalny himself could not go to Tverskaya Street on 12 June. The oppositionist was detained near his home — he was accused of repeated violation of the order of organizing mass events. Late in the evening, Simonovsky District Court of Moscow sentenced Navalny to confinement for 30 days, reports Mediazona.

As for the rally, some people went to Sakharov Avenue, the other part went to Tverskaya Street, where at 2 p.m. (the appointed time of the anti-corruption meeting) the festival of historical reconstruction Times and Epochs timed to Russia Day was underway. In the end, according to OVD-info, 866 people had been detained by 4 a.m. on 13 June in Moscow. By the way, on 26 March in Moscow there were detained more than a thousand people, according to Meduza. On 12 June, among those who were escorted by security officers to the police, there were not only accustomed to such things opposition politicians. Amont the detained ones there was a famous actor Aleksandr Pal and the publisher of Mediazone Pyotr Verzilov.

Two people were detained in Moscow on suspicion of the assault with pepper spray on police officers, reports Meduza. Later, Interfax with reference to the data of the National Guard of Russia reported that an unknown participant of the unsanctioned rally on Pushkinskaya Square sprayed a pepper spray in the face of a policeman. The victim received an eye burn, he was provided with necessary medical help. The offender was detained.

Meanwhile, as the Investigative Committee of the Russian Federation for St. Petersburg informs, a criminal case has been initiated against one of the unidentified participants of the rally on Field of Mars for using violence against a representative of the authorities. The unknown punched in the face of a police officer. About 160 people were arrested in other cities of the country. Most of all in Sochi — 50 citizens. In St. Petersburg, a criminal case has been initiated against one of the unidentified participants of the rally on Field of Mars for using violence against a representative of the authorities. Photo: Sergey Nikolaev (dp.ru)

How the Confederations Cup prevented the rally

Kazan authorities agreed the opposition rally in the capital of Tatarstan on 12 June, beginning at 7 a.m. in Yudino settlement. The rally was complicated by the fact that Kazan is among the cities hosting the Confederations Cup and is under the special security regime. According to the decree of Russian President Vladimir Putin, the special regime of ''meetings, rallies, demonstrations, marches and picketing not connected with the carrying out of the Confederations Cup and the World Cup'' has been introduced. The time and place of the meeting is justified by this fact.

Coordinator of Kazan headquarters of Navalny Elvira Dmitrieva stated on Facebook that this event was attended by about 600-700 people, 4 people were arrested. However, information on the number of detainees varies. Several media outlets reported about two detainees. One of the organizers of the event — Azat Gabdulvaleyev — immediately after the meeting reported about only his arrest. The correspondent of Realnoe Vremya contacted the Ministry of Internal Affairs for Tatarstan, but they refused to comment on the detentions.

The reason for the detention was the inconsistency of one of the posters (''No genocide of the indigenous population of Russia'') with the theme of the meeting.

Interestingly, the speakers at the rally were really changing the subject from corruption to other topics. Thus, a lawyer Taufik Vasilev from the scene criticized traditional Islam, reports Kazan Reporter. 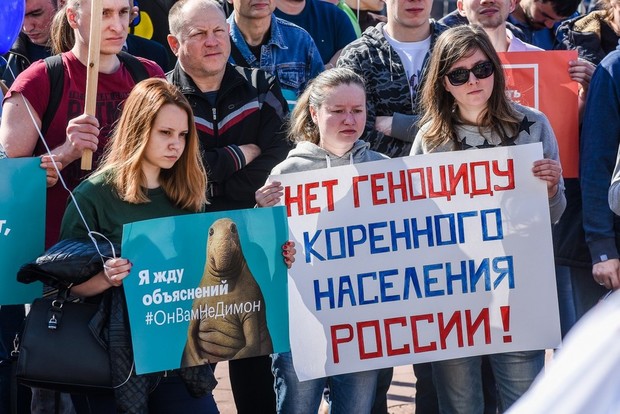 The speakers at the rally in Kazan were really changing the subject from corruption to other topics. Photo: Oleg Tikhonov

''The authorities have managed to minimise negative effects''

There have been different reactions to the meeting in the social networks. Political analyst Alexei Makarkin, speaking of the meeting on 12 June, said that Navalny won. In his opinion, the opposition politician understands the modern Russian youth — and acts. ''Young people are living in the conditions of another crisis of the authority of adults — this phenomenon regularly repeats, but today it has its own peculiarity,'' wrote Makarkin on Facebook.

A political scientist, president of the Foundation Petersburg Policy Mikhail Vinogradov, commenting on the meeting, expressed an interesting observation: ''The first hour is, of course, postmodern with elements of ''Oprichnik Day''. The mix of participants, walking citizens and reenactors.''

He also cited extracts from the report of the Expert Institute of social studies, which states that a normal dialogue contributes to de-escalation of tensions and development of the system due to the solution of the problems that caused the tension. As an example — the rally against opponents of the renovation on 14 May, ''which launched the mechanism of discussion of amendments to the law on the renovation. It ended with almost complete reworking of the draft law.''

''The transfer at the last moment of the meeting to the unagreed place where there was already being held a difficult by security event (6,000 military reenactors from different eras and potentially tens of thousands of people walking with children) could provoke serious clashes and casualties that could be in view. It would launch a ''loss of face'' of the power (examples can be find in the revolutionary experience of Moscow, for example, the role of the funeral of Bauman in the revolution of 1905), establish the boundaries of the group conflict ''we''— ''they'' between the government and a large part of citizens, it would form ''tunnel vision'' (it is only necessary to replace ''them'' and everything will be ok). The authorities have managed to minimize the negative effects. Those detained for such sharp provocations are not ''many'' but ''few'', there are no deaths and destructions at all,'' Vinogradov wrote on Facebook. 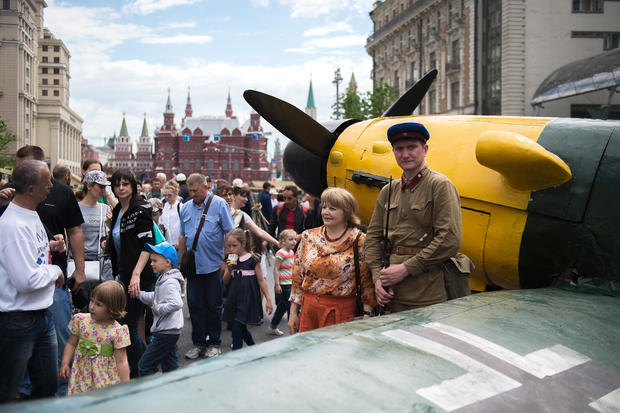 The transfer of the meeting at the last moment to the unagreed place where there was already being held a difficult by security event could provoke serious clashes and casualties. Photo: Aleksander Utkin (meduza.io)

However, other users of the networks noted that supporters of Navalny coerced children to attend the meeting artificially. ''Tonight — at 1:16 a.m. — a friend of my daughter, a 14-year-old girl, received a request in Vkontakte from a man calling himself Aleksey Livanov and ASKED to ATTEND the RALLY. The man had no personal information on his page in VKontakte — an absolute bot, primitive as boots. Before this, I watched the organizers of the school ''protests'' with interest — I was curious what creative and modern methods of political work are used against the cumbersome state system. But now I am being outraged — especially as a father. What the hell is going on? People lowered themselves to the recruitment of CHILDREN who do not have even the status of legal capability — not to mention suffrage. It's disgusting,'' said on his page in Vkontakte a famous radio host and showman Sergey Stillavin.